President Recep Tayyip Erdoğan promised good news to the nation on Feb. 8, saying, “I advise all of you to pay close attention to my Address to the Nation speech, which I will deliver on Wednesday. I’ll be giving you some good news.”

Feb. 10 was the day of said promised ‘good tidings.’ On that day, at 2:55 a.m., Operation Claw Eagle 2 was given the green light and 41 airplanes sortied to the Gara Mountain in northern Iraq. Two hours later, the ground offensive began alongside an air deployment from helicopters.

The main objective of the air operation was to free the soldiers, police, and intelligence officers held captive by the PKK or to kidnap leaders Duran Kalkan, whose base is located there, and Murat Karayılan, who was thought to be in the area.

Thus, because this operation had two elements, a victory on both counts would be considered good news. A political victory even. A golden opportunity to save the staggering AKP-MHP (Justice and Development Party/ Nationalistic Movement Party) grip on power. However, Erdoğan did not address the nation on Wednesday, instead news of casualties began to roll in.

Turkish Defense Minister Hulusi Akar announced the outcome of the operation on Feb. 14, saying, “50 terrorists have been neutralized.” Turkish authorities often use the term ‘neutralized’ to imply that the militants in question have either been killed, captured, or have surrendered.

Akar continued, saying that the army found the bodies of the 13 Turks who were previously kidnapped by the PKK and held in a cave in northern Iraq. He said, “While searching a cave taken under control, the bodies of 13 of our abducted citizens were found.”

He continued with his report, saying, “This operation, that was carried out mostly using domestically developed weaponry, struck a heavy blow to the terror group in the [Gara] region. Twelve of the abducted Turks were shot in the head and one in the shoulder. All of the executors in the cave have been either captured or killed. The operation has been completed. Our land and air forces have returned to their bases and barracks safely.”

Defense Minister Akar called the operation “a success” and congratulated the Chief of General Staff Yaşar Güler and the other commanders. General Güler said about the events, “Our field of operation was 75 kilometers wide and 25 kilometers deep, therefore, it was almost the biggest region of those we have conducted such operations in until now.” The general said that the PKK had moved to the Gara region because of the Turkish army’s previous operations in Haftanin and Hakurk, and that intelligence sources had discovered the whereabouts of the kidnapped Turkish citizens. General Güler congratulated the staff that took part in the operation.

What kind of rescue operation was this? Who or what could possibly be rescued from an area being bombarded by 41 planes day and night? If there were any actual opposition in Turkey, the ‘success’ of this operation would have been questioned. Any question that those who do not enjoy political immunity ask will certainly be answered with heightened oppression, violence, custody, and imprisonment. In fact, threats accompanied by investigations already started yesterday.

The HPG (People’s Defense Forces) announced on Feb. 11 that intelligence officers, police, and soldiers, who had been kidnapped by the PKK in 2015 after the peace process had ended, were being held hostage and that the camp where they were being held was being bombed by the Turkish army. The families of the soldiers and police officers even called for a halt to the operation.

Police officers and soldiers who were abducted wrote in letters that “They would be freed if the AKP asked for it.” The AKP never did this. The families of the hostages tried to reach the government many times, but their attempts were unsuccessful. They tried to be heard by political parties and human rights organizations: The families appealed to the parliamentary group of the opposition, pro-minority Peoples’ Democratic Party (HDP) four times, in 2015, 2016, and 2019, but the government did not acknowledge their calls. The Human Rights Association (IHD), which used to be the intermediary for such cases, also tried to reach out for five years. The state, which is supposed to discusses all options with these various groups, simply said, “We do not negotiate with terrorists” and closed the discussion.

A deputy from the main opposition Republican People’s Party (CHP) Murat Bakan submitted five motions to parliament between 2016 and 2018, but received no response. His sixth motion was answered, saying, “The fight with terrorist organizations is continuing with determination.” This was hardly an answer. Deputy Bakan’s seventh motion on Feb. 9 was answered with the bitter news that came as a result of the operation.
Such campaigns may have led to fruitful results in the past, but this current government’s proclivity for feeding on conflict has not allowed for any peaceful resolutions in the past five years. Who will respond to these families? What can they possibly say?

The bitter truth is as follows: There is no legal mechanism, no political pressure, and no media power that can hold the government accountable for its actions. On the contrary, anybody who dares to ask a question is dubbed a ‘terrorist’ and a thrown into a carefully curated lynch mob.

Defeating the PKK while causing a great number of casualties does not change the situation on the ground despite announcements of success of the armed forces. If the Claw Eagle series of operations has forced the PKK to seek refuge in the Gara region as General Güler indicated, and if the Gara region is now under control as the Defense Minister stated, then why did the armed forces retreat after the operation? Would they not have stayed if they were so successful? Would they not remain in Gara as they have done in Hakurk and Haftanin before?

This extensive operation in Gara was the first one since 1994 and targeting Gara has specific reasoning behind it when we consider the developments in both Syria and Iraq: The PKK uses the Gara region as a passage from Iraq into Syria.

The objective of the military operation in Gara was not only the rescue of the Turkish hostages, but to stay there and establish control of the area.

The whole incident does not give the impression of success when we consider the planning, targeting and results. It conjures images of the Roboski airstrike on Dec. 28, 2011, when the Turkish Air Force bombed a group of Kurdish civilians involved in smuggling gasoline and cigarettes, killing 34 of them. Roboski is hardly remembered anymore.

Nevertheless, even such devastating results or failures can become fuel for domestic policies. The recent campaign that propagates, “The HDP must be closed down” is the articulation of a continuous political genocide, aiming to cripple every opposition movement and to lay dynamites in the foundation of every possible partnership which could challenge the AKP-MHP ruling alliance.

At its core, this operation represents the continuation of a strategy that constantly increases targets, expands geographically, and challenges the country’s capacity while driving us further and further away from a peaceful solution to the Kurdish issue.

Turkey’s desire to control all the border gates between Syria and Iraq, including the Rabia and Semelka border crossings, is one of the most critical aspects of this strategy. Its suggestion to open a border gate at Ovaköy and rebuild the old road all the way to Mosul adds an economic dimension to this plan.

Following visits of the Akar-Güler duo to Baghdad and Erbil last month, several parties expected the military operation to start at Sinjar. Because the negotiation was always about Sinjar. This makes the allegation that Baghdad approved the operation seem highly unrealistic. Despite the existence of an agreement against the PKK's presence in Sinjar, there is also a wide rejection of Turkey’s military operations; The main political actors in Baghdad are against it. Although this sensitivity exists regarding Sinjar, there is a core of fear regarding Turkey's dreams of Mosul.

Hashd al-Shaabi, which is under Iran’s influence, is also increasing its presence in Sinjar in order to prevent a Turkish military operation. According to Rudaw Media Network, three brigades from Mosul, Najaf, and Karbala have been moved into the area. The 21st Brigade was deployed to the east of Sinjar, the 23rd Brigade to its west, and the 14th Brigade to Mount Sinjar. Abbas Ali, commander of the Hashd al Shaabi-affiliated Badr Force, who went to Sinjar when Gara was the location of the military operation, has said, "Neither Turkey nor the PKK, nor any other force, can threaten us. Is there no such thing as the sovereignty of our country so that anyone who wants to come here can do so as they wish?"

Hadi al-Amiri, head of the Fatah Alliance, said it had intelligence that Turkey would conduct operations in Sinjar and asked the government to take precautions. The Asa’ib Ahl al-Haq Movement called on Turkey to withdraw. The al-Nujaba Movement said there was an invasion plan all the way to Mosul and warned: "We will have the harshest response." Such was the atmosphere in Baghdad. This atmosphere has been noted by the U.S., which does not want Prime Minister Mustafa al-Kadhimi to be undermined.

The Sinjar deal signed between Erbil and Baghdad on Oct. 9 was intended to allow central powers to take control and to crush Turkey’s intervention plan. Iran, which is in favor of an intact Syrian-Iraqi border, wants Hashd al Shaabi to be included in this region. The U.S., while supporting the deal, hoped that federal forces would arrive so that Turkey would be assured and the Hashd al Shaabi would be moved away from the region. At a time when ISIS’ genocide of the Yezidis has created a such sensitivity, it is not likely that the U.S. will support a military operation at Sinjar.

In other words, Gara came to be because the military, political, and diplomatic forces were not mature enough for Sinjar.

Gara, however, is not an easy front. This rocky area 40-kilometers from the Turkish border has limited means of land supply. There is no back front like Haftanin and it is a rugged region where attacks can come from all sides. It is one of the most important bases used by the PKK for 37 years in logistics, education, and health fronts. Capturing Gara and holding it long-term requires a huge military build-up, supply capacity, and the support of the local Peshmerga forces.

The ground Turkey is trying to stand on is not strong. Turkey has gone this deep due to this increased capacity military strategy. There is an enormous political drive behind this. As a result, it is easy to make and carry out decisions. But the result? There is none. This strategy has brought us no closer to a resolution. If the solution sat on the peaks of those mountains, it would have been reached long ago. 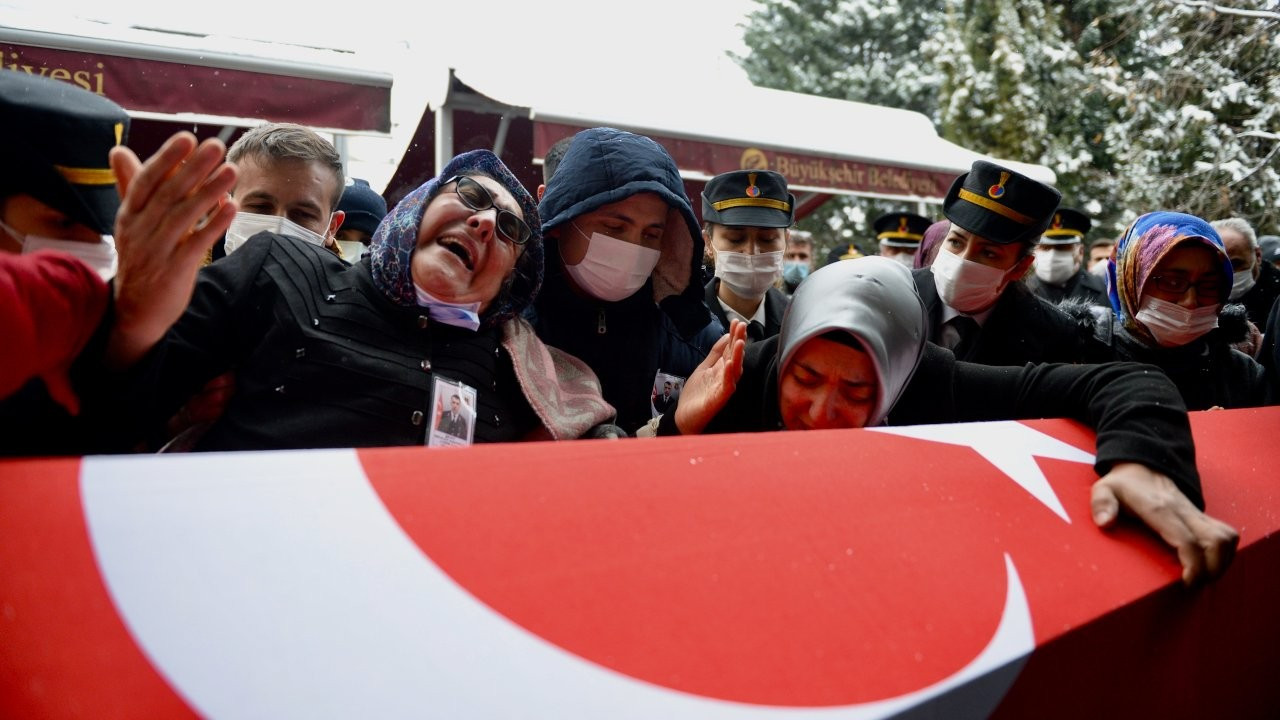 Responsibility for the deaths of 13 Turks in Iraq lies on Erdoğan: CHP leader KılıçdaroğluPolitics
Other Articles
October 12, 2021 Iran and Turkey return to the old game
September 24, 2021 What’s cooking for Syria in the Russian-American pot?
September 22, 2021 If you criticize Turkey’s border policy, you are a traitor
September 02, 2021 Good jihadi drives out bad jihadi in Afghanistan
August 26, 2021 The mission to protect the Taliban
Most Populars
Shelter employee beating dog to death causes public outrage in Turkey Turkish political leaders depicted as Disney characters 'Fake doctor' who worked in state hospital for 1 year arrested Cigarette packages collected by Erdoğan exhibited at the Presidency Erdoğan links soaring inflation to 2016 coup attempt Turkish main opposition leader visits MIT in US