The movie, which also ran under the category of Un Certain Regard in the 2022 Cannes Film Festival, focuses on Emre who is a young prosecutor and who is newly appointed to a small Turkish town, finding himself being pulled into a political conflict during his first murder investigation.

Turkey’s Culture and Tourism Ministry has demanded return of its Cinema Support Fund for the movie, citing “scenario change.” Burning Days became target of pro-Islamist figures as it gives place to a homosexual relationship.

Alper told Gazete Duvar that he wanted to say something about the political atmosphere of Turkey and increased authoritarianism in his movie.

Speaking about celf-sensorship, Alper said he shot every scene that was required in the movie "dramaturgically."

Below are the questions asked by Gazete Duvar and the director’s answers:

How did you come up with the idea to tell a story about bureaucracy and power dynamics?

The main motivation was to say something about the political nightmare atmosphere we have been living in our country in recent years. The wave of authoritarianism in question is, of course, a very universal process. However, Turkey is one of the countries where the most extreme and right-wing version of this universal trend is experienced. What we have experienced in the last six years is also unique in the history of the Republic of Turkey. I wanted to produce something about this traumatic political process that has diffused into our personal world, and to somehow reflect the feelings of suffocation, helplessness and loneliness we experience.

In one of your interviews, you said that you were inspired by Henrik Ibsen's play "An Enemy of the People". What is its importance?

This is the story of a character who expresses a truth that benefits the public in the long run but no one wants to hear at the time, and is demonized by a group of local elites and their crime partner local people. I thought this text might be the beginning of a critique of authoritarian populism for me. Because all these authoritarian leaders are building a power based on lies and manipulation by suggesting short-term but extremely dangerous solutions, inciting the prejudices against the minority, and ruthlessly marginalizing those who tell the truth and those who demand equality.

When such a micro-political narrative is told in Turkey, everyone uses the countryside, villages or towns. Your movie “Beyond the Hill” was a bit like that. It also has a sociological and political basis. I guess “being townly” doesn't imply just a spatial quality for you?

Of course. First of all, we can talk about a ruralization process in the sense that Turkey's politics in recent years broke away from the central world and started to produce a more lame, more complex and angry reaction against it. Therefore, it is not surprising that a narrative about "homeland politics" commonly used in the countryside. But besides this, the town has the characteristic of being the source of the things we criticize in terms of the values it represents historically.

Conservatism comes first among the values represented by the rural. The rural people are almost universally more conservative than the center. You know, when you look at the electoral map of the United States, you see the same thing. The rural is more masculine, tougher, so it is a place where the negativities we want to criticize about this country are more intense and sharper. More masculine, more nationalistic, more conservative, militaristic, brutal…

Well, is the countryside used as a place for political criticism because it is reflected in politics a lot?

Of course, at least this is what we criticize in our political culture. We have been criticizing this for years, but in recent years, our political life has started to consist of these things we criticize. Our country's political culture has never carried the values we wanted and desired. We are going through a period in which proto-fascist, far-right thought dominates politics. We can only compare this with the Nationalist Front governments of the 1970s, and that period was very short compared to today. We are living through a period in which all the features that I just mentioned and claim to be more intense in the rural, all the negative features such as masculinity, nationalism, aggression and homophobism occupy the main agenda of politics.

All your previous movies had allegorical narration, but this movie speaks more directly. What was the reason for this change? Searching for a new language?

I totally agree with you, but I can't really say that my narrative language has changed based on these. Yes, it's clearer, more direct, but many points are still very implicit in the story.

First of all, this is the movie in which there is a direct relationship with today. My other movies were always somewhat timeless, spaceless. For example, I was saying more general things about the political situation of the country, not the current political situation, in the Frenzy movie.

Does this indicate lasting change? I'm not sure about that, we'll see. In short, since the motivation of this movie is to say something about the political reality and the feelings we have experienced in recent years, I did not hesitate to speak.

Two of the main themes of the movie are outrage and lynching. In such a story, there must be victim/victims, and we know that, from the perspective of power, there are plenty of issues to be a victim in this country, becoming a Kurd, an Alevi, a migrant, a woman… You show that the rumor spread in the town about the sexual orientation of the two characters has been turned into a justification for the lynching. Does the recent hostile attitude of the language of the government against LGBTI+ play a role in this preference?

Of course there is. Of course, this is not the only reason for the rage. The water issue (in the movie) is also very important. There are other political factors, such as the upcoming elections, the prosecutor's desire to detain the mayor again, etc., but of course homophobia is a very important issue. Just as you said, the government's recent policy of making anti-LGBTI+ attitudes as an official state policy is one of the most important factors in my choice, and this policy continues increasingly. Finally, one more step has been passed. Declaring that they will put an anti LGBTI+ article in the constitution raised the bar not only in terms of Turkish history but also globally.

Let's talk about the Culture Ministry’s request for its funding back. Actually, this was a tension that has been going on for a while, as far as I understand. Can you summarize the process a bit?

Yes, recently the Ministry has officially asked for a refund of the funding it has given to the movie. First of all contrary to the false claims of some media outlets, we have complied with all formal procedures. There is no such thing as the scenario being different from the movie. It is also very difficult to do this, because these fundings are given in three installments. When you first get accepted, second after completing filming, and third after handing over the movie

Yes, the scenario has changed, as I have said in other media before. Scenarios change all the time. It's impossible otherwise. It changes on set, it changes in editing. Everyone knows this. Since all funds already know this, there is no oversight mechanism anywhere in the world that seeks what changed in the scenario. Support is given to the project. It cannot be interfered with after that. We know why this regulation was introduced. This is a clause introduced so that scriptwriters and directors always keep the self-censorship mechanism active during the creation process

With this film, the implicit threat of “requesting the money” for a movie was implemented for the first time. As I mentioned before, we submitted the final version of the script, including all the changes, to the Ministry before filming. We also know that this script was read before going on set. The Ministry never gave an official response to the script. When we were accepted to Cannes, pro-government media started to report (against the movie). I guess the pressure on the Ministry must have increased because our submission was answered after 20 months. They now demand the money back by operating an indirect censorship mechanism

This is very dangerous. Unfortunately, the ministry has launched a process that is making all directors nervous. Because no reason is given in the letter sent to us. Therefore, this has now opened the door to an enormous arbitrariness. Everyone will have the following anxiety from now on: What if the changes in my script are not liked completely arbitrarily?

At the press conference at Golden Orange Festival, you said "Our censorship mechanism begins much earlier, when we write the script". I want to talk a little bit about this self-censorship issue. How strong is self-censorship over you and other creators?

The issue of self-censorship now has many dimensions. There is a self-censorship that starts with financial impossibilities. Maybe it's not right to call it self-censorship, but we sit at the table knowing what we can and cannot do. For example, we even think about a scene like this while writing it: The character enters the mall, wanders the stores. Even as I write this, how are we going to enter the mall? How are we going to pay the lease? Censorship starts here.

On the other hand, there are scenes in this country that are very difficult to shoot. This is not just about the LGBTI+ issue. For example, the sex, make out scenes. Actors do not want to act in such scenes and they are not wrong at all. Because playing in such a scene means that these scenes are the first video watched on YouTube. It will follow your career everywhere. Because of the society we live in, we have difficulty in envisioning certain scenes in the first place since we know that producers, actors will not play in certain scenes. I did not talk about the ministry or anything yet.

On top of this, of course, the concern of getting the support of the ministry for independent movies. But all this does not mean that we do not fight this pressure of self-censorship. The conflict with the Ministry right now is the punishment for resisting this self-censorship. I have to shoot whatever a movie requires dramaturgically. There was no scene in this movie that I didn't shoot when it was necessary to shoot.

There are some comments. They say ‘In this era, should there be such an implicit homoeroticism scene?’ My answer to this is very clear. This ambiguity (in the scene) is in harmony with the dramaturgy of the film, since we see the world through the eyes of Prosecutor Emre and he does not yet have a clear answer about his own sexual orientation and identity.

But if one day I come across such a situation, if there is a project that I want to shoot but think I can't shoot properly due to censorship, which I have at the moment, I would prefer to postpone it to a distant future, to a time period where I hope the conditions will change. 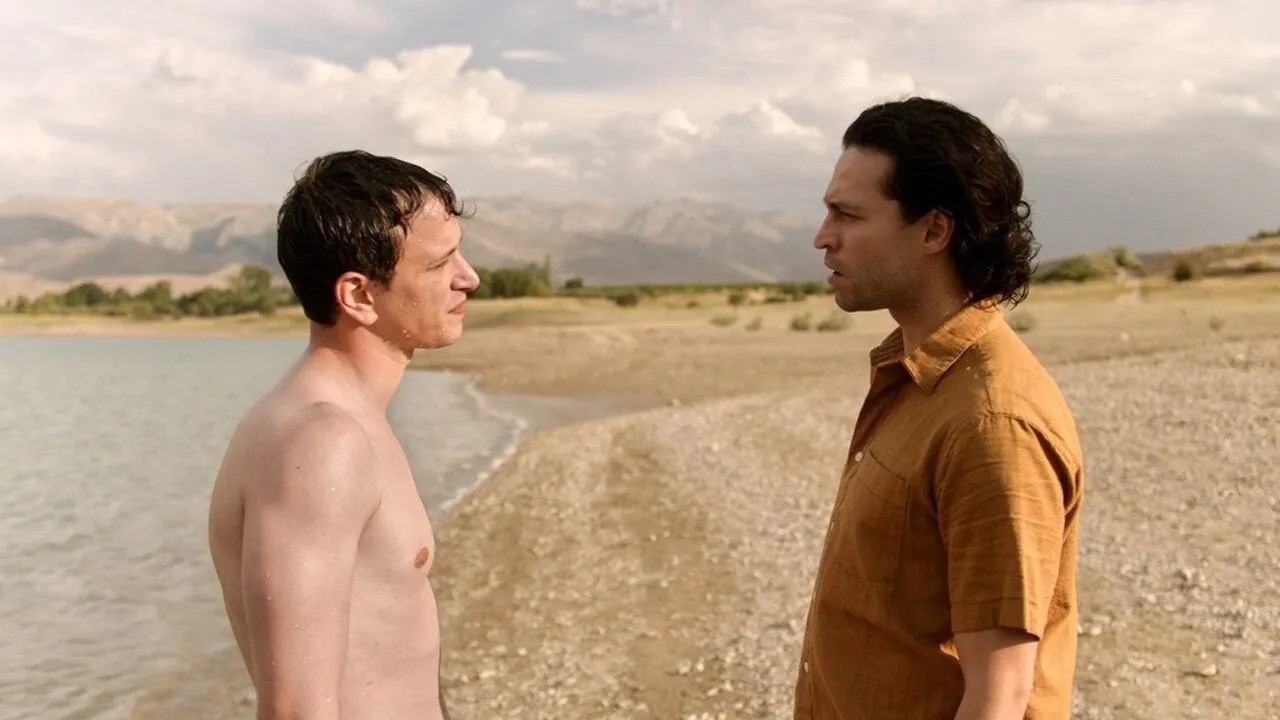