TurkishPresident Recep Tayip Erdoğan has launched a campaign to collectdonations from citizens for those in need amid coronavirus outbreak,saying he was donating seven months of his salary to the cause.

“Within the context of 'We are enough for each other, Turkey' campaign, a bank account has been opened by the Family, Labor and Social Services ministry. I initiate the campaign by donating my seven months of salary. Our ministers and our colleagues accompanying the cabinet have made a donation of 5.2 million liras [approximately $790,000] in total for the campaign,” Erdoğan said.

Erdoğanmade the comments on March 30 during a press conference afterchairing a meeting with the cabinet members via teleconference.

“Our purpose is to provide a [financial] support for our low-income citizens who have suffered due to the measures taken [amid coronavirus],” Erdoğan said, adding that the donation campaign had already drawn $11 million.

“We are calling on all our deputies in the parliament, all our political party organizations, especially the [ruling Justice and Development Party] AKP, all mayors and bureaucrats to partake in the campaign. And we are expecting the biggest contribution from our businesspeople and philanthropists,” he said.

The government has taken strict measures to limit social contact to prevent the spread of the virus since the first case was confirmed nearly three weeks ago. Thousands of businesses have been shut down amid tightened measures since then, while several people had their salaries cut. 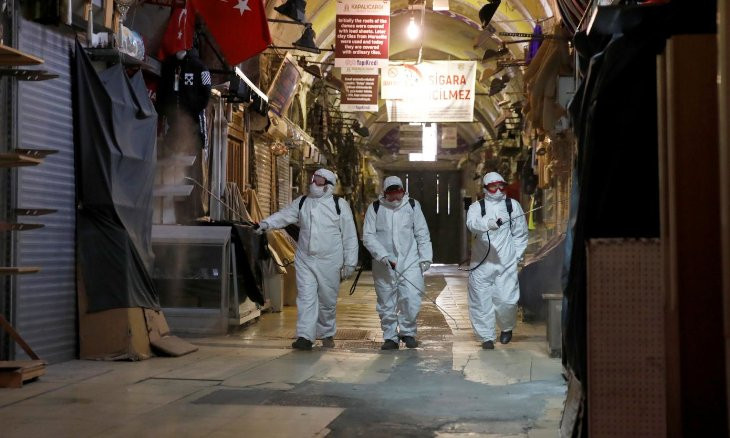 Earlieron March 30, Health Minister Fahrettin Koca announced that the numberof confirmed cases in the country rose to 10,827, while 168 peoplehave died from the disease.

Erdoğansaid Turkey must keep producing and repeated a call for citizens toimpose their own quarantine.

"Ourmost important sensitivity here is to continue production to sustainthe supply of basic goods and support exports," he said.

"Turkeyis a country that needs to continue production and keep the wheelsturning under all conditions and circumstances."

Turkey has placed 41 residential areas under quarantine in order to contain the spread of the coronavirus, the president said.

He also said that Turkey enjoys better medical facilities compared to other countries fighting the virus. "Turkey is rapidly opening new hospitals while also strengthening the existing ones."

"We are determined to use all means to curb the spread of the virus," he said.