Ankara has slammed Turkish Cypriot President Mustafa Akıncı's remarks on the prospect of annexation by Turkey, with the ruling Justice and Development Party (AKP) officials urging him to apologize for "disrespecting" the country.

Akıncı, the leader of the Turkish Republic of Northern Cyprus (TRNC) that is recognized only by Ankara, told The Guardian on Feb. 6 that the prospect of Crimea-style annexation was "horrible."

"I’m not going to be a second Tayfur Sökmen," Akıncı said, referring to the president of Hatay, who in the 1930s merged his republic – formerly part of French-mandated Syria – with Turkey after a referendum.

During the interview, Akıncı warned the Mediterranean island faces permanent partition of its Greek and Turkish communities unless an agreement is swiftly reached involving an “equitable” federal solution.

He also said the differences between the two sides were growing more entrenched every year, diminishing the prospect of reunification.

"We need to hurry up. After all these years we have come to a crossroads, a decisive moment," he said.

Akıncı – who on Feb. 5 launched his re-election campaign – said the only viable solution to Cyprus’s nearly half century of division was reunification under a federal "roof." If this failed to happen, he said the north would grow increasingly dependent on Ankara and could end up being swallowed up, as a de facto Turkish province.

His remarks were met with condemnation from Ankara.

"Akıncı needs to apologize for the disrespect he showed to the Turkish Republic and our people," AKP spokesperson Ömer Çelik said, adding that Akıncı's statements contradict his position as the leader of Turkish Cypriots.

'Tool of an election campaign'

Turkey's Vice President Fuat Oktay also condemned Akıncı's remarks, saying that using Turkey as "a tool of an election campaign" will not be tolerated, while Presidential Communications Director Fahrettin Altun deemed Akıncı's remarks as those "reflecting concern for personal survival."

Altun said in a written statement that Akıncı does not deserve to sit on the chair of presidency.

"Turkey has no designs on the soil of any country and it will not tolerate Turkish soil being made benefits available to anybody," Altun said. 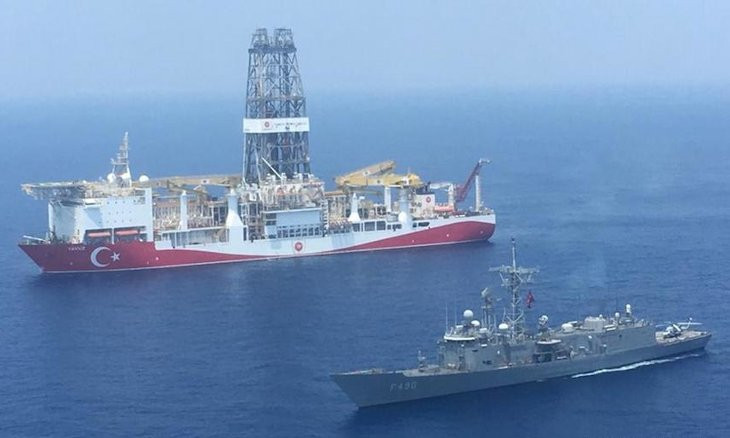 "That Akıncı criticizes Turkey via claims not existing is a wrong behavior with the aim of winning the election," Tatar said, adding that Turkish Cypriots will punish Akıncı by not voting in favor of him in the presidential election set to be held on April 26.

Tensions between Akıncı and Erdoğan have recently grown. In November, Akıncı criticized Turkey’s military incursion into northern Syria, to which Erdoğan responded by saying the Turkish Cypriot leader should "know his limits," adding that the electorate would soon teach him a "lesson."

Akıncı said he disagreed with Erdoğan’s vision of the relationship between Ankara and Nicosia as one of "mother and baby."

"I want independent, brotherly relations," he said, while acknowledging the TRNC had to do more to make its economy less reliant on Turkey, which pays the government’s bills. To do this he needed support from the south, he said.

While the TRNC is recognized only by Turkey, the rest of the world supports the southern (Greek Cypriot) Republic of Cyprus, an EU member since 2004.

Since winning office in 2015, Akıncı – a leftwing former Nicosia mayor – has tried to push the Cyprus peace process forward. He led UN-mediated talks with his Greek counterpart Nicos Anastasiades in Crans-Montana, Switzerland, which collapsed in 2017. The process is currently in limbo.