Turkey reportedly sent arms to Libya to support one of the warring factions, in a move that Duvar English contributor Yörük Işık deemed as common for international backers of both sides of the conflict.

In a video, the BBC detailed the alleged arms shipment in a ship called Bana that set sail from the Turkish port of Mersin at around 6 a.m. on Jan 24.

The ship's stated destination was the Tunisian port of Gabes, the BBC cited one of the sailors on board as saying, adding that the ship vanished from the radar on Jan. 27 when its transponder went off some 400 kilometers off the coast of Libya.

Turkey supports the UN-recognized Government of National Accord (GNA) based in Tripoli and sent dozens of military training personnel after the two countries signed a series of deals.

Amid the increasing violence in the country, a conference was held in Berlin to discuss the issue on Jan. 19, where world leaders, including President Recep Tayyip Erdoğan, vowed to stay out of the Libyan conflict.

However, according to the BBC, Turkey broke the agreement just days after the conference.

In the video, the BBC showed satellite images from Jan. 28, which showed three boats to the northeast of Tripoli, with the one in the center being a boat whose dimensions and color scheme exactly match those of the Bana.

Another image posted from Tripoli on Jan. 29 shows the Bana was escorted by a G-Class military frigate, which is only used by the Turkish navy.

"Clearer satellite imagery taken on the same day completes the picture. It shows the Bana docket at the port of Tripoli," the BBC said.

According to the BBC, a video posted on Twitter on Jan. 30 that was allegedly filmed in the hold of the Bana shows a series of weapons, including armored combat vehicles, cannons, self propelled howitzers and an anti-aircraft gun.

The broadcaster then compared the images taken on board the same ship during the same crossing and found out that the ship on the video is the same with the one in the images.

"We know it's the same ship because the configuration of vehicles seen in the images exactly matches that seen in the video," it said, while also concluding that the ship is the Bana based on the aforementioned images and another taken from the bridge.

"Outside we see one of the G-Class navy frigates that escorted the Bana across the Mediterranean. We can also see that the windows and the railing exactly match those of the Bana," it said.

Three days after it left Tripoli, the Bana reached the Italian port of Genoa where a member of the crew told police that the ship had been used to carry arms, the BBC said.

"That claim is confirmed by images taken on board by Italian authorities. One captured a unique pattern of damage left on a ramp. A fingerprint of marks that exactly matches the video filmed when the weapons were still on board," it added.

It then went onto cite five sailors interviewed by the Italian authorities. According the BBC, the sailors confirmed loading arms to the ship.

"They were guarded by 10 Turkish soldiers," one of the sailors reportedly said.

The broadcaster said that it asked Turkey's ruling Justice and Development Party (AKP) about the allegations, but it did not respond.

Commenting on the report, Duvar English contributor Yörük Işık said that an arms embargo is in place in principle since there is a war in Libya, but its not similar to that imposed on North Korea.

"The UN has an embargo to prevent international parties from providing arms. It's not as strict as the one imposed on North Korea," Işık said, adding that both sides of the conflict have been receiving international support.

"Haftar received support from the United Arab Emirates via cargo planes took off from Dubai," he said.

Saying that Turkey's move of using the Lebanese-flagged Bana is a part of an "asymmetrical warfare," Işık noted that the method is often used by Russia in its arms shipments to Syria.

"There are a group of ships whose names and flags are changing since they are trying to hide among the busy maritime traffic," he said.

Işık pointed to the fact that if the ship was caught, it would only affect Turkey ethically. 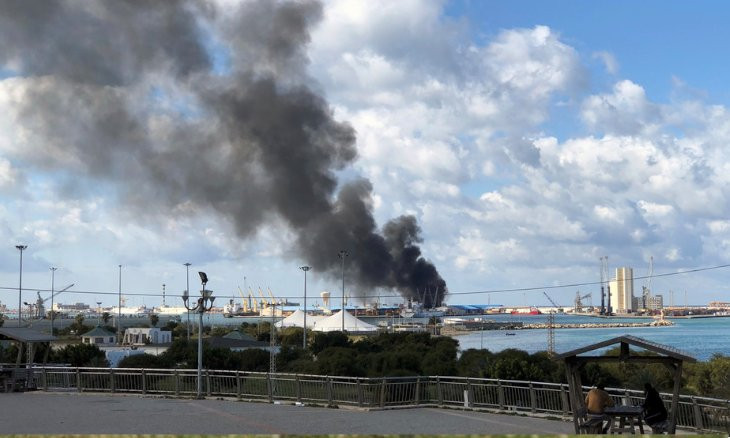 "The ship is Lebanese flagged and didn't have any Turkish citizens on board," he said, adding that Italy, which is where the ship is docked currently, can file a lawsuit against the company that owns the ship - a move that wouldn't affect Turkey.

"What's new in the BBC report is that they matched footage and images," Işık also said.

Saying that the fact that Bana was sent with two frigates shows the emphasis Ankara put on the shipment, Işık noted that Turkey was confident when carrying out this logistical operation due to being sure that no one would stop the ship.

"The government found a window of opportunity and used it," he said.