Turkish Foreign Minister Mevlüt Çavuşoğlu has reacted against his Spanish counterpart Arancha Gonzalez Laya's reference to Hagia Sophia as a “common house,” saying the iconic structure is a mosque and has been so since the year 1453.

“If she [Laya] meant [with her reference of 'common house'] that Hagia Sophia remains protected with all of its properties and remains open to everyone's visit, this is ok, but if she meant that Hagia Sophia should remain a site where believers of other faiths will perform worship, we do not agree with this,” Çavuşoğlu said on July 27.

Çavuşoğlu made the comments during a joint news conference with Spanish Foreign Minister Laya in the Turkish capital Ankara.

"Hagia Sophia is a mosque. It has been a mosque since 1453," Çavuşoğlu said.

Laya said that it was important that Hagia Sophia remains part of humanity's shared global heritage, after it was reconverted into a mosque from a museum last week.

"For us it is important that the spirit of this great monument of Hagia Sophia is maintained," she said.

Hagia Sophia was the largest cathedral in the world for 900 years until its capture by Ottoman Sultan Mehmet the Conqueror in 1453, after which it was one of Islam’s most exalted mosques for nearly another 500 years.

In 1934, the iconic structure was converted to a museum by modern Turkey’s secularist founder Mustafa Kemal Atatürk. 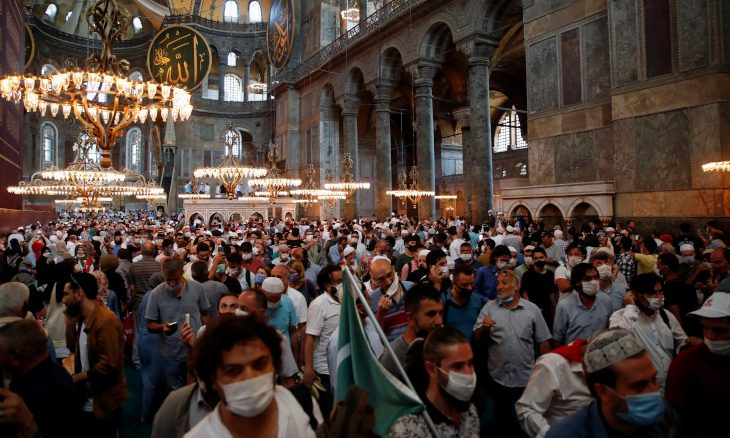