Lawyers from across Turkey will meet at an Ankara courthouse on March 2 and march to the Supreme Court in protest of the disintegration of the rule of law that has occurred in recent years under the ruling Justice and Development Party (AKP) government.

Members of 25 bar associations including those from Istanbul, Izmir, Ankara and Antalya will march in order to “call for judicial independence, the rule of the law, fair trials, and to condemn the executive interference in the judiciary.”

Lawyers last took to the streets five years ago in protest of a security law that gave police increased powers. During that demonstration, the Union of Turkish Bar Associations (TBB) and its Chairman Metin Feyzioğlu participated, however in recent years Feyzioğlu has muzzled his criticism of the AKP and President Recep Tayyip Erdoğan and their stranglehold on the judiciary, and the protests failed to ensure any improvement in justice and the rule of law.

“In fact, the situation has gotten worse. The TBB has not fought on the behalf of lawyer's rights and judicial independence. In the past five years, the TBB changed and Metin Feyzioğlu changed. There is axis shift and it can't be corrected. For that reason we did not call upon the TBB,” said Chairman of the Istanbul Bar Association Mehmet Durakoğlu.

“After courts hand down decisions they are dispersed, and investigations are opened against the judges making the decisions. Whether we make press statements or publish memorandums we are unable to achieve results or get a reaction. What is taking is to the streets is an attempt to ensure the society's demand for justice and to explain to society that Turkey is experiencing its most serious judicial crisis,” Durakoğlu said.

“The decision in the Gezi case, the demonstrations following the decision, the dispersion of the court that made the decision to acquit, and the decision to arrest an acquitted person, something that has not been seen anywhere else in the world, was the straw that broke the camel's back,” said Izmir Bar Association chair Özkan Yücel, referring to the recent decision in the Gezi Park trial where the main defendant, businessman and civil society leader Osman Kavala was acquitted, but subsequently rearrested on the basis that he was involved in the July 15, 2016 coup attempt.

“We want to explain that the interference in the will of the judiciary has reached a very clear point and if the judiciary is finished off then everything in the country can be finished off. That's why we will be in Ankara on March 2. We will be waiting for our colleagues who defend judicial independence,” Yücel said. 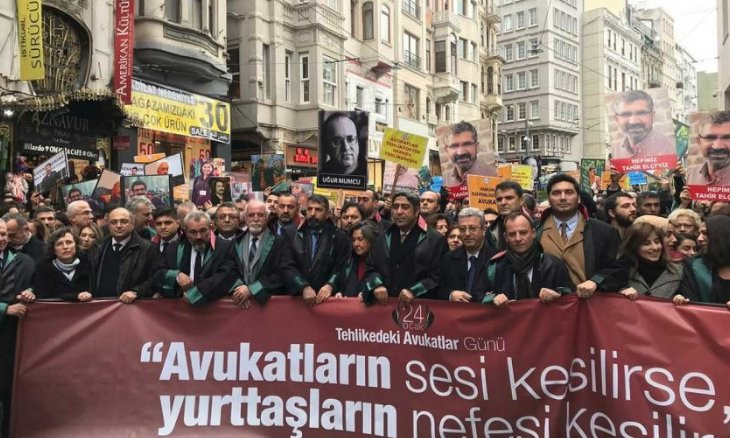