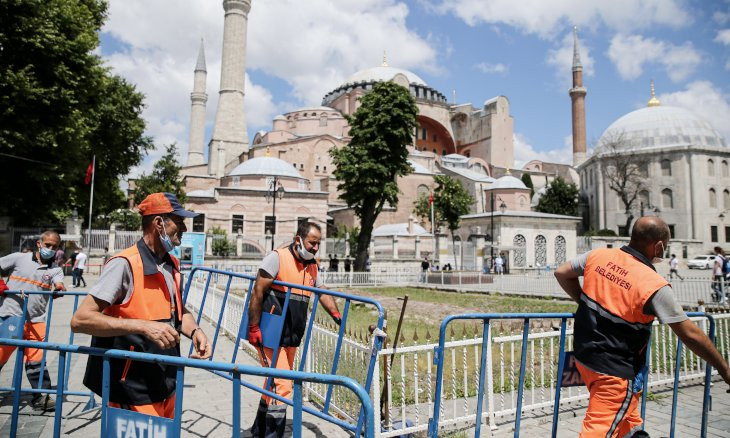 Some 43.8 percent of Turkish people believe that the conversion of Istanbul's iconic Hagia Sophia into a mosque is an attempt to change the agenda of the country and divert the public attention away from the economic crisis, according to a survey conducted by Metropoll Research.

The company's June survey asked 1,300 people what they think “is the purpose of bringing up the subject of opening Hagia Sophia for prayer at this time.”

According to the survey results, 43.8 percent of participants said “the aim is to change the agenda in order not to talk about economic crisis.”

Some 29.5 percent of participants on the other hand said the aim is simply “to reconvert the structure into a mosque,” while 11.7 percent said “the aim is to come with up with an argument which the rulership wants to use prior to the [potential] early election and which it believes will be effective.” The rest of the 15 percent answered, “I do not have an idea/answer."

The Month In 5 Numbers June 2020: What do you think is the purpose of bringing up the subject of opening Hagia Sophia for prayer at this time? #MetropollTurkeysPulse pic.twitter.com/hbLPTXcWP0

Metropoll chairman Özer Sencar also shared the survey results on his Twitter account, saying: “It is in vain to expect a political gain from the conversion of Hagia Sophia into a mosque, if there is such an expectation.”

“In this period in which the economic crisis is affecting the whole society in a very deep way, it is not possible for it [conversion of the sixth-century structure into a mosque] to give the expected benefit, for whichever purpose it is done...What really matters is that the problems of financial hardship and unemployment are tackled,” he wrote.

President Recep Tayyip Erdoğan on July 10 signed a decree opening Hagia Sophia as a mosque after Turkey’s Council of State annulled a 1934 government decree that had turned it into a museum.

Erdoğan shared on his Twitter feed a copy of the decree he had signed which said the decision had been taken to hand control of the Ayasofya Mosque, as it is known in Turkish, to the country’s Religious Affairs Directorate (Diyanet) and reopen it for worship.

Greece said the Turkish court’s ruling was an “open provocation” to the civilized world, while the Russian Orthodox Church said the decision could lead to even greater divisions.