"I decided that I won't be able to continue my duty that I had been carrying on for five years because of my health issues," Albayrak, who is also President Recep Tayyip Erdoğan's son-in-law, said, adding that he will spend time with his family.

Albayrak's statement came after a 30 percent plunge in the lira currency's value this year to record lows as the economy faces a sharp contraction during the coronavirus pandemic. In the early hours of Nov. 8, Erdoğan replaced Central Bank governor Murat Uysal with ex-minister Naci Ağbal.

Two sources at the presidency could neither confirm nor deny the statement when reached by Reuters, but a Finance Ministry official confirmed its authenticity.

Several Turkish sources told the Middle East Eye that Erdoğan's appointment of Ağbal had been done without Albayrak's knowledge.

"Erdoğan has directly decided the appointment of Ağbal. This might have triggered his resignation," one Turkish government insider said.

Other sources have also speculated that Albayrak and Ağbal had disagreed on economic policies.

"The very appointment itself suggests that Ağbal was going to answer directly to Erdoğan rather than Albayrak," one of the sources said. 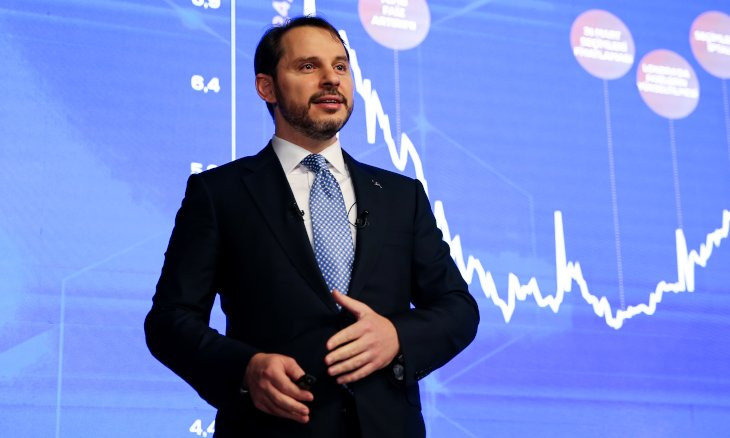 Turkish finance minister says gov't 'unconcerned' about dollar's rise, would curb it 'if it wanted to'

The fashion of the resignation caused turmoil itself, surprising even some of Albayrak’s own aides, who said the minister’s phone was off when they tried to reach him, Bloomberg reported. Albayrak also appeared to have deleted his Twitter account on Nov. 8, and messages from a fake account denying the resignation were widely distributed.

Albayrak, 42, was appointed energy minister in 2015 and shifted to finance after Erdoğan was re-elected with sweeping new executive powers in 2018.

During his tenure at finance, Turkey's economy has been hit by two bad slumps, double-digit inflation and high unemployment. The lira has shed more than half of its value since the beginning of 2018.

Deputy Transport Minister Ömer Fatih Sayan said on Twitter he hoped Albayrak's resignation would be rejected, adding "our country, our people and our community need you."

Mehmet Muş, the deputy parliamentary group chairman for the ruling Justice and Development Party (AKP), said Albayrak had taken important steps to strengthen the economy and that he hoped Erdoğan would not accept the resignation.

"We personally witnessed his diligent work. If our president sees fit, I hope he continues at his post," Muş said on Twitter.

Earlier this year, Interior Minister Süleyman Soylu also announced his resignation following criticism on his untimely decision to impose a curfew to curb the spread of the coronavirus, but it was not accepted by Erdoğan.