The Taliban are trying to move outside its original boarders. They are seeking international recognition, relations with neighboring countries, and to be free of isolation and embargo. The path to achieving these aims is to give just enough that it is not seen as making concessions with regard to sharia.

Vahidullah Hashimi, a senior leader of the Taliban, told Reuters, “There will be no democratic system at all because it has no roots in the country. We will not discuss what kind of political system we should build in Afghanistan because it is clear. There will be Sharia and that is it.”

Taliban spokesperson Zabihullah Mujahid said everything related to women’s education, work, press freedom, and human rights will be within the framework of Islam. “Sharia law will be imposed,” he added. What remains to be discussed is which tone of the sharia is to be implemented.
Certain major actors seem to be content with this game that the Taliban wants to play. The chief interventionist, the U.S., and its partner, Britain, are being extremely kind to the Taliban. They say they will judge the Taliban on deeds, not words. They are already in communication. U.S. Secretary of Defense Lloyd Austin said there have been “No hostile interactions with the Taliban and our lines of communication with Taliban commanders remain open.” The Taliban’s commitment not to attack is the reason to keep the door open. US Deputy Secretary of State Wendy Sherman said, “The Taliban are hoping to create a government in Afghanistan. They seek legitimacy. We are all watching their actions. Their actions will speak to whether in fact they are going to protect the basic human rights and the basic rights of the Afghan people. And their actions in these days will tell us whether there is reality to what their words say, or whether there is not.”

President Tayyip Erdoğan appears to be more than willing to shake hands with the Taliban. What he has consented to looks like a mission beyond working with the new Afghan government in accordance with the interests of the Turkish state. Perhaps it is a mission that is to be updated according to the circumstances.

As the Taliban tried to put gently, nestled between words of friendship, Turkey has been an invading force aiding the U.S. The facts that it was not a combatant force and that they have not seen any hostility from the Taliban since January 2002, when the first Turkish soldier arrived in the region, do not change this status. The target of this invasion was the Taliban.

Later, as the U.S. was withdrawing, controlling the Kabul Airport became a mission to protect the interests that remained in the country. However, the airport mission was in vain after the Taliban arrived in Kabul and easily rolled out the red carpet. Rhetoric regarding an eagerness to operate the Kabul airport was updated. Erdoğan has repeatedly said that they were in contact with the Taliban. Last week, he said, “It is the necessity of pacta sunt servanda (loyalty) and brotherhood to stand with Afghanistan, regardless of who is in charge.” He added, “We welcome the restrained and moderate statements made by Taliban leaders." Then, he publicized advice for the Taliban: “Turkey’s military presence in Afghanistan will strengthen the new administration’s hand internationally and facilitate its work.”

Before that, Erdoğan said that they had nothing to contradict the Taliban’s beliefs. He also sent the message that he was ready to meet in person with the Taliban’s leader.

One can’t help but wonder whether Erdoğan was given the job of protecting, curbing, or taming the Taliban. Every other country seems to be protecting its own national security and interests. In Turkey, however, all the diplomatic competence is zigzagging depending on which national or international position Erdoğan wants to protect at the moment. Of course, Ankara can also act according to the requirements of international relations. However, Erdoğan is acting with the goal of normalizing, legitimizing, and launching the Taliban.

Nevertheless, Erdoğan’s words alone should be looked at along with Foreign Affairs Minister Mevlüt Çavuşoğlu’s statement saying, “We will act together with the international community on the issue of recognizing the future government.” Since 2002, the year the ruling Justice and Development Party (AKP) came to power, what they refer to as the “international community” has been nothing more than hegemonic drive, listed according to U.S. priorities. Çavuşoğlu’s statement indicates the desire to keep a wide birth. After all, the U.S. has not made up its mind yet. It is difficult for Erdoğan to act without coordinating with Washington.

The partnership in those interventions in Iraq, Syria, and Libya developed according the song of ‘international community.’ However, they shift the focus by saying that the offer of support came from Turkey. Thus, the Afghanistan story, which is steeped in talk of ‘brotherhood,’ is no different. The Kabul mission, which Erdoğan said, “I proposed to Biden,” is a task the U.S. has been trying to pin on Turkey since the beginning. We can only find out what Erdoğan negotiated on the June 14 bilateral summit in Brussels from U.S. records because Erdoğan had an outsider interpreter instead of a staff member from the Foreign Ministry. For the moment, we can look at the BBC report, based on Foreign Ministry sources:

“It was months ago when the United States discussed the idea of Turkey serving as a combat force. This was based on Turkey’s wish to remain in Afghanistan for a longer term. Turkey rejected this proposal. Washington then offered Ankara to expand its airport mission, which already covered internal security and management.”

According to the BBC, Ankara approved the proposal on the condition that the intelligence and security for the U.S. embassy be integrated with the airport. When an agreement was reached, the U.S. offered up Turkey to host talks between the Afghan government and the Taliban. The Taliban, on the other hand, refused to come to Istanbul. They also rejected the offer for Turkish troops remain at the Kabul airport. Ankara has attributed this negative attitude to the opposition of Qatar, Pakistan, Russia, Iran and China. Unlike Erdoğan, the Foreign Affairs Ministry was not keen on the Kabul mission. Nevertheless, Erdoğan still shook hands with President Biden. In exchange for the Kabul mission, he was expecting a gesture in the S-400 issue, the Halkbank case, or the F-35 program.

As far as I can gather, Ankara is inclined to consider the threats of the Taliban, which has not been hostile to Turkey for 20 years, as performative. Erdoğan said, “The Taliban’s approach to Turkey is not sharp; it is careful and rather sensitive.” Acting like that demonstrates the Taliban’s need for a country that can be its voice in NATO. However, the Taliban may not cling on to the rhetoric of brotherhood while it is bidding on two assurances from China and Russia in the UN Security Council, which are uncomfortable with Turkey’s involvement. The Taliban’s sensitivity comes from its pragmatism. They are trying to turn their evolution into a diplomatic gain.

The Taliban’s attitude is understandable, but the mystery remains regarding why Erdoğan has been stuck with the airport mission for so long even though circumstances have changed. Was there something binding concerning his agreement with Biden? Or has the conversion of the militarization of foreign policy programmed itself into Afghanistan this time after Libya, Syria, and Iraq?

As a result, despite Erdoğan’s emphasis of ‘closeness,’ there has been no significant progress in the dialogue among the Afghans or in influencing the Taliban. The capacity of trusted mediators is limited. Like other actors, Ankara is awaiting the outcome of the committee’s talks with the Taliban, which include former President Hamid Karzai, the head of the National Reconciliation Council Abdullah Abdullah, and Hezbi Islamic leader Gulbuddin Hekmatyar. Will this team, which NATO allies are also counting on, find a middle ground with the Taliban or not? This is the most critical question these days.

If an inclusive government is formed, those actors that have designed the process can accept the Taliban’s commitments as facts and start a new chapter. This would not end Afghanistan’s 40 years of darkness, but the spiral of civil war and conflict that nurtures this darkness could be removed. Otherwise, the scenario in which the Taliban has its own plans for the government could trigger a proxy war between those who recognize the new government and those who do not. The Panjshir Valley, for example, is already presenting a new front against the Taliban, as it did before 2001. This time, names such as Ahmet Masoud, son of Ahmet Shah Masoud, seem to have entered the game. If the U.S. disagrees with China, Russia, and Iran, which are on the same page, then they could relaunch the mujahideen incubator and play to an unstable Afghanistan option against these three countries. It is still too early to speculate. For now, they are searching for a light in the darkness coming from the Taliban, in order to maintain diplomatic relations with Afghanistan and to remain in Kabul. I guess there are plenty of people who want to believe this lie. 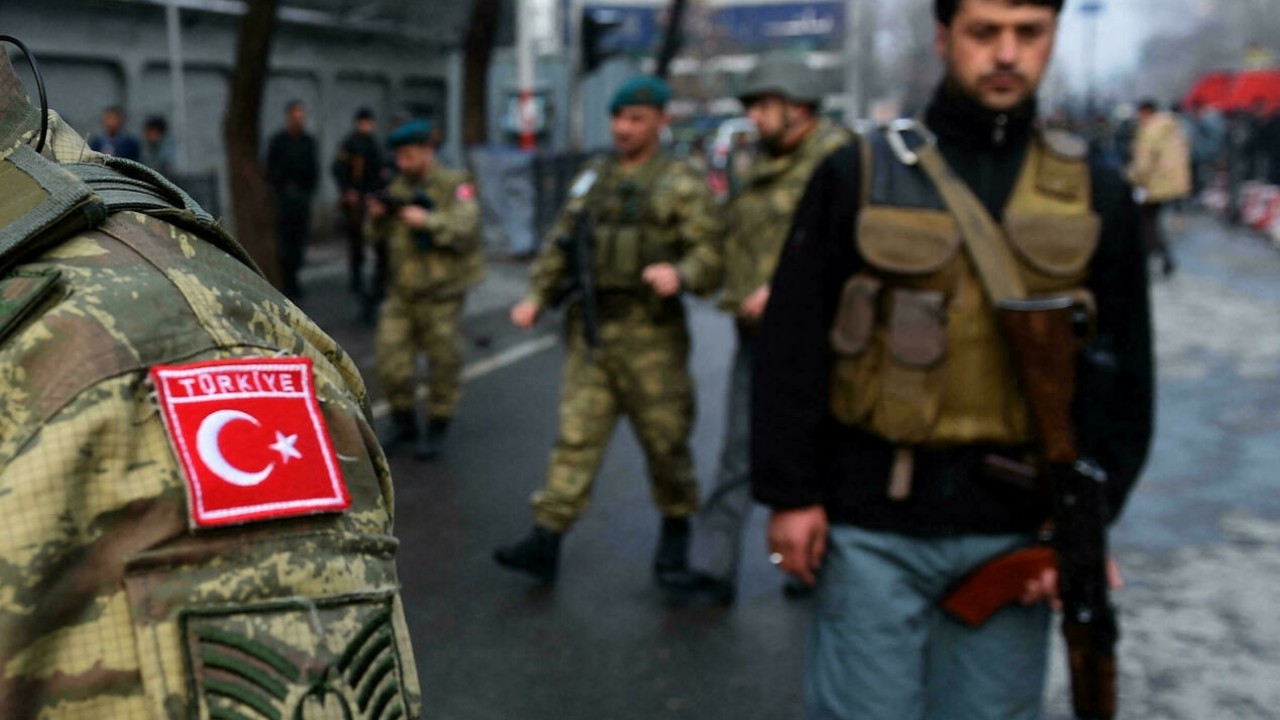