Members of the ruling Justice and Development Party (AKP) and its right-wing ally Nationalist Movement Party (MHP) in the Istanbul Municipal Council on Jan. 16 voted down a proposal to recognize the status of cemevis as places of worship.

The proposal was submitted by the main opposition Republican People's Party (CHP) and İYİ (Good) Party groups. As the AKP and MHP members have a majority in the council, the proposal was rejected.

Prior to the voting session, Mayor Ekrem İmamoğlu, from the CHP, called on all the political parties to "decide with their conscience."

"We can't decide on who will use which place as a place of worship. We expect all the parties to decide on the issue with their conscience," İmamoğlu told reporters.

Cemevis are houses of worship of Alevis. Even though the Alevi community is the second largest religious community in Turkey, the country does not recognize cemevis as official houses of worship. Only mosques, churches and synagogues are granted with this legal status.

Tevfik Göksu, the AKP's group deputy chairperson in the municipal council, and MHP group spokesperson Volkan Yılmaz said that the issue of whether cemevis should be designated as official places of worship or not "comes under the authority of the Turkish Parliament."

CHP group deputy chair Doğan Subaşı and İYİ Party group deputy chair İbrahim Özkan recalled rulings handed down by the Court of Cassation and Council of State recognizing cemevi buildings as worship places, saying that the Istanbul Municipal Council should be a "pioneer" regarding this issue.

The CHP-İYİ Party proposal said 93 cemevis in Istanbul can't benefit from public services that other places of worship can use and this is against the constitution's equality principle.

Following discussions, the municipal council, dominated by the AKP and MHP members, voted against the proposal. 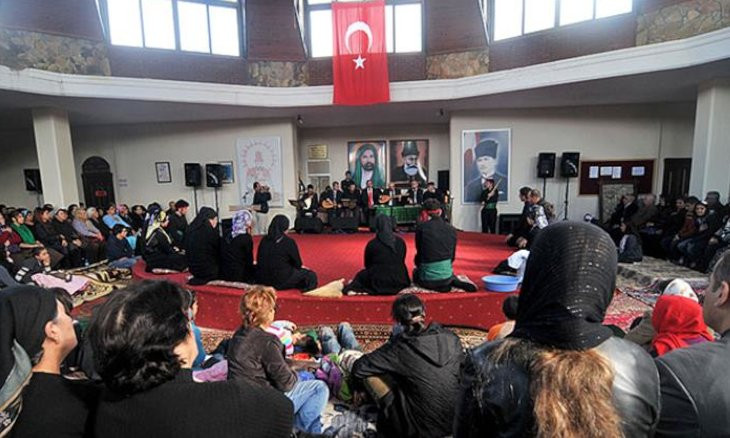 In a similar move, the municipal council of the western province of İzmir recently discussed whether or not to designate cemevi buildings as official places of worship in the zoning plans.

Alevis make up an estimated 15-25 percent of Turkey’s population, the second main religious group after Sunni Islam. One of the differences between Alevis and Sunnis is their places of worship. Sunnis worship in mosques, whereas Alevis worship in cemevi. Mosques and cemevis are fully separate entities that have little to do with each other.

Despite the fundamental differences in religious practices between the two groups, the government to-date refuses to acknowledge Alevi cemevi as the legitimate place of worship and to grant cemevis the same financial support as mosques. Instead, Turkey claims that cemevi is a cultural entity.