Associate Professor Emir Kaya from the university's Law Faculty said during the live video on April 29 that “There is no obstacle for LGBT activists to be designated as terror organization in one day.”

Kaya made the comments during a special live video recording held for Ramadan. He was the guest of Asım Yapıcı, a professor of Faculty of Theology.

“We are bringing the issue of LGBT to the agenda. There is no reference or an explicit legality for this in any of the international agreements signed by Turkey or our local legislation,” Kaya said.

Kaya said activists' referring to Istanbul Convention's 3rd Article on sexual orientation to promote LGBTI rights is “the exploitation of the law.”

Both Kaya and Yapıcı have expressed their dissatisfaction about Turkey being bound by the Istanbul Convention.

“That Convention does not belong to us…We signed it because our state, our country is weak. We are not a country that can stand on its feet without approaching Europe, the United States and when we are at odds with them, without approaching Russia. This is our reality,” Kaya said.

He said although no official in the Turkish government believes in the Istanbul Convention's stance regarding LGBTI individuals, they cannot afford to “break off the relations with Europe.”

“Does even one person in the government believe in the LGBT-related clause in the Istanbul Convention? The government itself, our president does not also believe in it. But is it worth it to break off our relations with Europe? This is what is being asked. Because if we take a step back from this [Convention], Europe will say 'you are a backward Muslim country,'” Kaya said.

Kaya claimed that Turkey will “at some point” no longer follow the steps of the European Union due to political reasons. “And this has already started. It can be good or bad; that is another point. It [Turkey] will leave [the EU's line] and then, there is no obstacle for these LGBT activists to be designated as terror organization in one day,” he said.

Yapıcı agreed with Kaya and interpreted his remarks as the state having the duty to “protect the society's sexual and faith health, just as physical and mental health.” 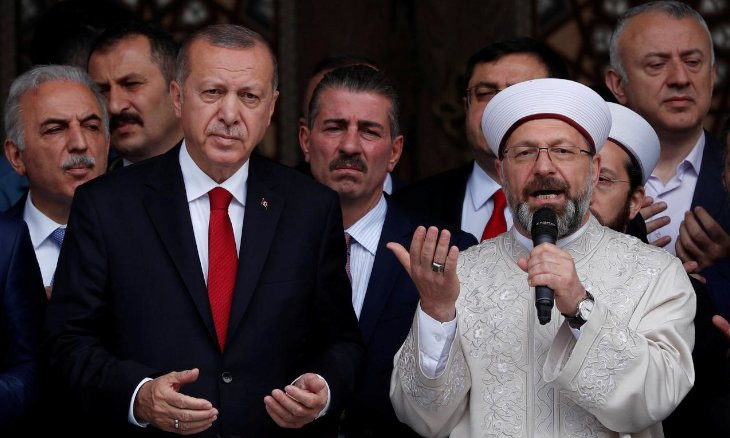 On April 27, President Recep Tayyip Erdoğan threw his support behind Erbaş, saying: “An attack on our Diyanet head is an attack on the state.”

“Our Diyanet head has made a statement, and with this statement he has fulfilled his duty with regards to his belief, discipline and duty. And what he said is right to the end. Of course our Diyanet head’s remarks are binding for those who define themselves as Muslims,” Erdoğan said.