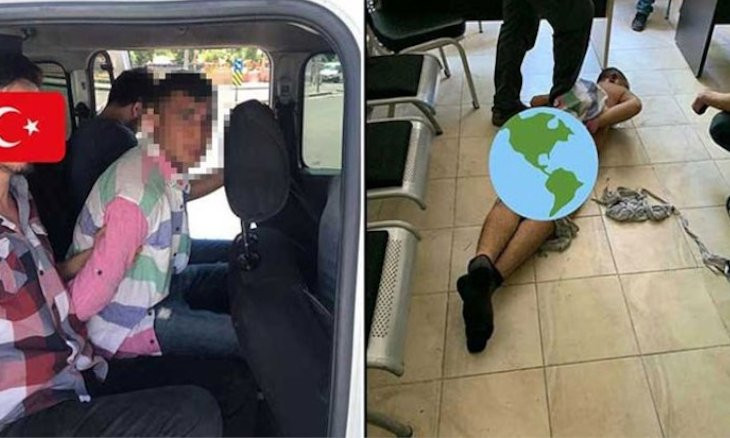 Police officers have made their dogs attack a couple when raiding their house in the southeastern province of Diyarbakır.

The couple, Menice Yılmaz and Şeyhmus Yılmaz was sought over an investigation into the killing of police officer Atakan Arslan on May 30 in the province. Police reportedly broke the door to raid the house as they were looking for the main suspect, identified only as M.E.C.

Police raided Yılmaz couple's house with three dogs early on May 31 and released them for attack.

The couple headed to a hospital to get a report on the bite marks, before filing a complaint over police brutality.

"We live in a house that we rented from M.E.C.'s grandmother. We have never seen him and don't know him. Before the raid, we heard gunshots in the building, so I wanted to take the children to a room in the back. Police broke the door and released the dogs," Menice Yılmaz told Mesopotamia News Agency, adding that their children were traumatized by the incident.

"They're waking up at night, saying, 'The dogs are here.' They ask me whether the dogs will come back," she added.

Şeyhmus Yılmaz said that he was beaten by nearly 20 police officers during the raid, "because they thought I was M.E.C."

"They then made the dogs attack me," he said, adding that they were prevented from calling the emergency service.

Diyarbakır Governor's Office released a statement on the issue, saying that Şeyhmus Yılmaz "kicked the dog and the dog attacked as a result."

Dozens of houses were raided as part of the probe that led to M.E.C.'s eventual arrest after being tortured in police headquarters.

Footage showed him lying on the ground naked with a police baton next to him.

Emre Soylu, an advisor to a deputy from the Nationalist Movement Party (MHP), shared the photos of M.E.C. in a tweet and wrote “a traitor, in the compassionate arms of the police.”

Another suspect, F.A., was also arrested in the case.