One of the five people detained at a press conference by pro-Kurdish Peoples' Democratic Party (HDP) told a police officer who was kneeling on his back to stop pressing and that he can't breathe.

The detained protesters' shouts of "stop pressing" and "my chest hurts" are clearly audible in the footage of the detentions, shared by journalist Zeynep Kuray.

The events are reminiscent of the May 25 police killing of black Minneapolis resident George Floyd, who died from asphyxiation as an officer held him down by kneeling on his neck.

Floyd's last words "I can't breathe" became an instant symbol of the worldwide protests for the Black Lives Matter cause, drawing attention to the amount of police brutality blacks are subject to.

The HDP press conference was organized as part of the party's Democracy March to the capital Ankara.

HDP co-chair Pervin Buldan said at the kick-off for the march that it would continue until peace, freedom and democracy exists in Turkey.

Journalist Hasan Akbaba is thought to be among the five people detained at the press conference in Istanbul's Beşiktaş district. 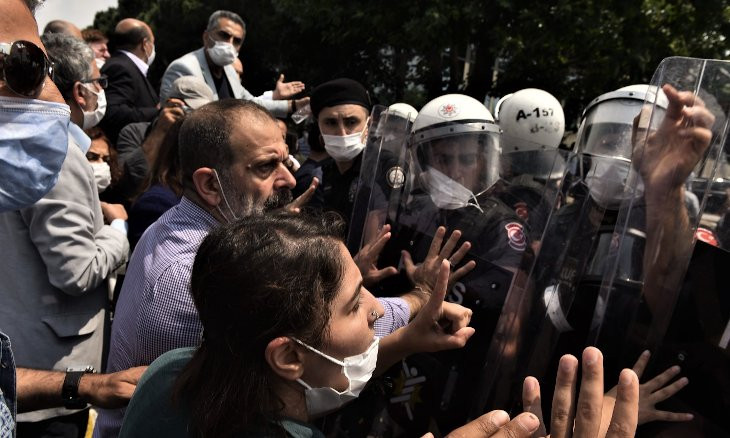