A lawyer in the eastern province of Van has said that the death toll in a recent migrant boat accident is currently unknown.

While some hundred migrants were thought to be in the boat that sank in Lake Van on June 26, the total number of migrants who die in the area each year is also unknown to authorities and the public alike.

Located at close distances to both the Iranian border and the border to Iraq, Van is a stop along many migrants' path to Europe.

Seven bodies were found in Van Lake in the continuous search efforts since a boat sank on June 26, although the actual number of passengers remains unknown.

While Interior Minister Süleyman Soylu said that they estimated 66 passengers were on board, the number has been claimed to be over 100. 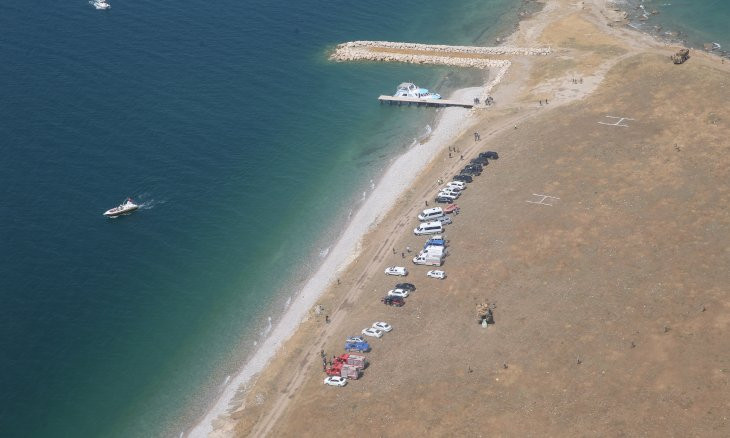 Boat that sank in Turkey's east was carrying up to 60 migrants, 11 detained

Van Bar Association Migration and Asylum Commission member lawyer Mahmut Kaçan said that they're following the situation in Van Lake and that they will soon release a report on it.

"Unfortunately we don't have enough information about the boat that sank in Van Lake over the weekend. The Van Bar Association hasn't received a public defender request for the boat yet."

The lawyer noted that the city of Van has been dealing with problems around migration for a long time as it has been an entry point for migrants from Iran, Afghanistan, Pakistan and Bangladesh since the 90s.

"Recent years have seen a surge in mass migrant deaths. In the winter, it's usually because they froze and in the summer it's traffic accidents," Kaçan said.

Noting that Van Lake has been the site of human trafficking in recent years, Kaçan said that Turkey doesn't have any legal disincentives against the crime.

"Deaths occur as a result of human trafficking, which has become an industry in recent years, which offers transportation that risks human lives."

The lawyer said that the lake is used as an alternative route to land transportation in an attempt to avoid road controls.

The lawyer added that road controls often lead to migrants' deportations, which he said is against international law.

"When caught by law enforcement after crossing the border, these people are sent to repatriation centers without even being able to seek asylum," Kaçan said. "So people are trying to get to big cities like Istanbul, Izmir or Ankara without being caught."

The lawyer said that their estimates of the number of migrants who die in the area are much higher than official numbers, noting that the Governor's Office said nobody had died in January despite a known accident where migrants froze to death in Çaldıran.

"Unfortunately, it's impossible to point to specific number for the number of migrants who die in Van or who are detained. As the bar, we prioritize these peoples' safety and rights over their numbers."

A total of 108 migrants are known to have died in accidents in the province during the past year.