Three years after the killing of Kemal Kurkut, a young Kurdish man who was gunned down by police in the majority-Kurdish city of Diyarbakır in March 2017, an expert report was published which determined that Kurkut's killing was inexcusable and indicates that disciplinary investigations had been launched against four police officers. 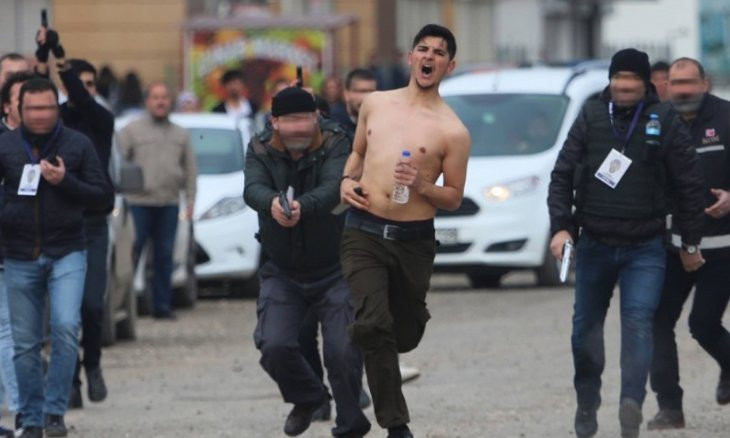 Police experts prepared the report shortly after Kurkut’s killing and presented to the Ministry of the Interior, though it was just recently released. Photographs surfaced after the incident showing Kurkut shirtless with a knife in one hand and a bottle of water in the other, with a pained expression on his face, running from numerous police officers who had their weapons pointed at him.

Police officer Y.Ş. denied any wrongdoing in Kurkut's death, saying that he only fired at his feet and did so on the basis that he thought Kurkut was a suicide bomber that could harm civilians. The four police in question also claimed that they fired warning shots in the air so that Kurkut would drop his knife and that other police officers at the scene had also fired shots.

The report determined that 13 bullet shell that were fired from the gun of O.M., one of the four police officers, were recovered at the scene of Kurkut's death. It also indicated that Kurkut had received psychological treatment at a hospital in the neighboring province of Malatya and found that there was no evidence that he was a member of a terrorist organization, and stated that he was not a threat at the scene of the shooting.

In 2019, a Diyarbakır court ruled that Y.Ş., the only officer being charged in Kurkut's death, to receive a 24-month demotion although prosecutors were seeking charges of life imprisonment. The other three officers were dismissed from their jobs, though it is still unclear which decisions the police department’s high discipline board made regarding the fate of their positions made.

Serdar Çelebi, one of the lawyers for Kurkut's family, said that the expert's report confirms what his team has been saying from the beginning about how Kurkut could have been apprehended without being harmed.

“Before it was clear what happened, the governorate declared that Kurkut was a 'suicide bomber' and that a 'terrorist had been neutralized.' The fact that a journalist there coincidentally filmed the moment of Kurkut's shooting actually brought the event to a different dimension. You can be sure that if the journalist (Abdurrahman Gök) had not taken the footage, the case would have been closed as an [attempted] suicide bombing,” Çelebi said.