Miners from the provinces of Manisa and Karaman are planning on marching to the capital of Ankara in demand that their employers pay them unpaid wages and severance pay that is long overdue.

Miners from Karaman's Ermenek district will march to the city of Konya on Oct. 12, where they will set up a tent in front of a feed factory owned by the same company that runs the mines they work in. If a solution isn't reached, they will continue to Ankara and will space out their walk to the capital over the course of 18 days in commemoration of the 18 workers that were killed in a mine flood in 2014.

Miners from Manisa's Soma district are also embarking on a march to Ankara starting Oct. 12, and they intend to first pay a visit to the graves of the 301 miners who were killed in an explosion in the Soma mine in 2014. That tragedy went down as the deadliest job site accident in the history of Turkey. 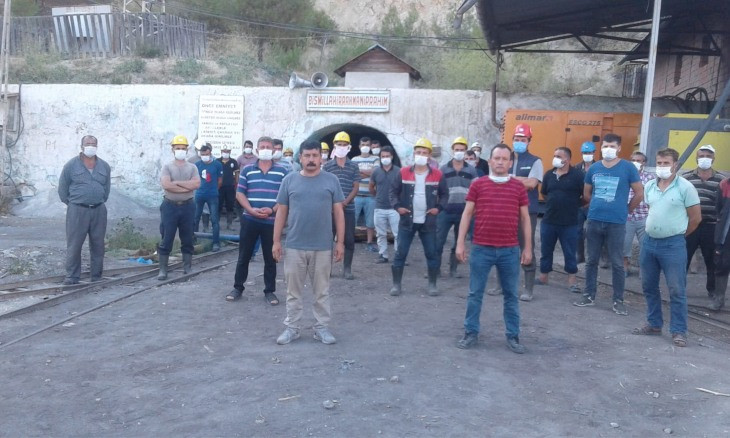 “The problems started after the disaster in 2014. In the Cenne worksite where there was continual exploitation, the boss put workers to work but continually delayed their salaries,” said mining engineer Emel Tunçdemir, who worked at the mine for seven years.

“Our demands are that our salaries and severance pays are paid, our colleagues that were fired from their jobs be rehired, and for a system to be established which ensures job health and safety standards,” Tunçdemir said.

Some miners have even had the electricity in their homes cut as they are unable to pay their bills due to their salaries being withheld.

“We want an end to this victimization. If we cannot receive our rights, we are determined to march to Ankara,” said Ermenek miner Abdullah Büber, who cited irregular pay, an increase in shift times and a reduction in days off.

“My life became a disgrace. For a year and a half I laid in bed without looking to my left or right. I lost all of my assets. My house become a hovel. We live in a home without doors and windows. I'm depending on my children,” Kandemir said.

Kandemir also plans to march to Ankara in pursuit of his rights. He said his health problems have continued for years after the blast that claimed his eyesight.

“After the explosion, apart from my eyes there were many injuries on my body. On my face alone there were 354 stitches. I had 18 surgeries. During this process that has been ongoing for years the company has not even extended the slightest amount of help. Now I have a one-year-old daughter. I can't see her face, and I never will be able to see it.”