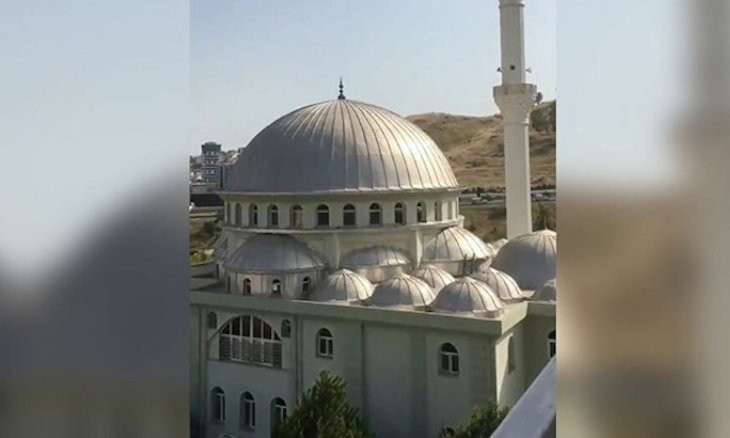 Turkey's main opposition Republican People's Party (CHP) leader Kemal Kılıçdaroğlu on May 22 slammed President Recep Tayyip Erdoğan after the latter accused the CHP of "overjoying" at the hijacking of several mosques' speaker systems earlier this week in the Aegean province of İzmir.

Kılıçdaroğlu said Erdoğan's accusations were "despicable," recalling that the CHP has severely condemned the hijacking.

The Italian resistance song “Bella Ciao” was on May 20 broadcast simultaneously from several mosque minarets in İzmir. Shortly after the incident, the provincial religious directorate issued a statement regarding the incident saying that the central adhan system had been sabotaged by unidentified people.

Kılıçdaroğlu on May 22 said that “Worship places are holy” and the CHP does not accept anything being broadcast from mosques other than the calls to prayer and national anthem.

Only a couple of hours later after Kılıçdaroğu's statement, Erdoğan accused the CHP of having aspirations to hear “a sound other than the sound of adhan” coming from mosque minarets.

“The CHP does not fall short of displaying its ugly face. While the cowards are making disrespectful broadcasting, CHP executives in that province are overjoying about this on social media. Their dreams are to hear a sound other than the sound of adhan coming from the mosques,” Erdoğan said during a meeting with his ruling Justice and Development Party (AKP) provincial heads on May 22.

In response to Erdoğan's accusations, Kılıçdaroğlu recalled that several CHP officials, including İzmir Mayor Tunç Soyer and CHP's İzmir provincial head Deniz Yücel condemned the hijacking incident and labelled it as a “provocation.”

“Let’s not fall into the trap of those who want to polarize us,” Soyer had said in a press statement on May 21, adding that incident is trying to be used as “a tool of political propaganda against İzmir.”

Kılıçdaroğlu also recalled that the CHP had condemned the broadcasting of the song “Dombra” from a mosque in the eastern province of Ağrı prior to the 2019 local elections. “We had also condemned the incident of a mosque minaret blaring out 'Dombra.' Those who did not raise their voice [against that incident] at the time cannot say anything to us at all right now!” Kılıçdaroğlu wrote on Twitter.

The song “Dombra” is in fact based on a Central Asian folk tune and it became identified with Erdoğan after its lyrics have been adapted into a eulogy at the request of the AKP. The song is played repeatedly during rallies held by Erdoğan and the AKP during election campaigns.

Meanwhile, Banu Özdemir, the CHP's former deputy chairwoman for İzmir, was arrested on May 22 on charges of "provoking public enmity" by sharing videos of "Bella Ciao" being blared out of the mosque minarets.

Özdemir has denied any disrespect to religious values, saying that she had become a target of trolls. She indicated that she shared the videos two hours after they were shared on other websites.

“I have downloaded those videos two hours after they were released on various websites and then shared them [on Twitter]. There is no insult or defamation in my [Twitter] posts. I am also a believer. I would not do that,” Özdemir told Barış Yarkadaş, a journalist and former CHP deputy, on the phone. Yarkadaş shared the content of his telephone talk on his Twitter account.

Özdemir said that the prosecutors had not even taken her testimony regarding the investigation and dispatched her immediately to the court with a demand of her arrest. "The court decided to arrest me citing the 'reaction of the society.' This is an unlawful decision,” she said.

"The arrest of our friend Banu Özdemir shows that instead of those who undertook provocation by breaking into mosques' systems, the CHP is being targeted with a plot. This decision which is completely unlawful is an indicator that the AKP has no tool left other than the exploitation of religion," Yarkadaş said.

In a statement, the local religious authorities announced that they have temporarily deactivated the centralized sound system in mosques, while Bağcan condemned the incident.

“They have broadcast my song from the mosque minarets in İzmir. This is completely a provocative action. They are trying to pull Turkey into some places. I severely condemn this,” Bağcan wrote on Twitter.