A court has ruled to hold the trial into the summoning of Turkish National Intelligence Organization (MİT) chief Hakan Fidan to testify by the followers of the U.S.-based Islamic preacher Fethullah Gülen in 2012 behind closed doors.

The court board of Istanbul 23rd Heavy Penal Court on June 22 imposed a publication ban on the trial and asked everyone except the defendants, suspects and their lawyers to leave the courtroom, saying that information that would put national security in danger might surface.

The testimonies in the case were expected to reveal significant information regarding Turkey's recent history.

The incident on Feb. 7, 2012 was the first serious rift between Gülenists and the ruling Justice and Development Party (AKP), which were once close allies.

Former prosecutor Sadrettin Sarıkaya, who was arrested in February 2017, sought to summon a number of officials, including Fidan and former MİT chief Emre Taner to testify on Feb. 7, 2012, over allegations stemming from discussions between MİT and the Kurdistan Workers’ Party (PKK), known as the Oslo talks.

On the same day, then-Prime Minister Recep Tayyip Erdoğan was scheduled to undergo a surgery, but postponed it and ordered Fidan to not testify.

The talks between 2009 and 2011 in Oslo were as part of the efforts of finding a peaceful solution to the Kurdish issue.

The talks presaged the government’s resolution process, which ultimately failed in summer 2015.

There are 34 suspects in the case, with 14 of them fugitives, including Gülen himself.

The indictment deems the incident "FETÖ's first attempt to overthrow the Turkish government," referring to the Fethullahist Terrorist Organization (FETÖ) - the official name of the Gülen movement. It also says that the Gülenists aimed to force the government to resign by detaining Fidan via creating the perception that the MİT chief attended Oslo talks upon orders of Erdoğan.

According to the indictment, the suspects went to the U.S. to meet Gülen before Feb. 7, 2012.

President Erdoğan, Fidan and members of Turkey's 61st government are complainants in the case.

The suspects are tried over a number of accusations, including "forming, managing and being a member of an armed terrorist organization" and "obtaining state secrets for military or political espionage." They face aggravated life sentences each, as well as prison sentences between 26 to 53 years.

The MİT law was changed on Feb. 17, 2012 in parliament and the prime minister's approval became necessary to launch probes into MİT officials. The warrants on intelligence officers were lifted the next day. 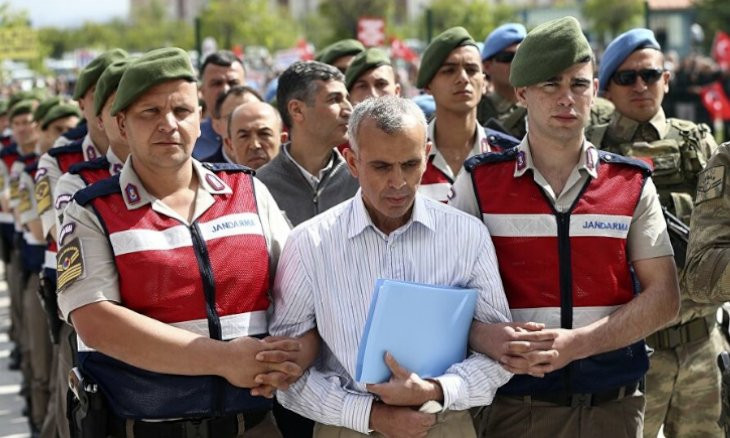