The mosaics and frescoes in Istanbul's Hagia Sophia will reportedly be covered up with laser lights, as Turkish authorities are making preparations for the opening of the museum-turned-mosque.

The laser lights will cover up the faces on the mosaics and frescoes, daily Hürriyet reported on July 11, adding that a special system is being worked on.

President Recep Tayyip Erdoğan's July 10 decision to convert the sixth-century site from a museum into a mosque drew concerns on the fate of the icons, mosaics and frescoes inside it.

Earlier, the daily said that the mosaics would be covered up with lighting tricks during prayers.

Erdoğan's spokesperson İbrahim Kalın commented on the issue, saying that the religious iconography will be preserved, adding that they will remain "untouched" for the viewing of people of all faiths.

All is welcome to visit the Ayasofya Mosque to enjoy its splendor as a house of worship and historical cultural site. pic.twitter.com/9wvBVQhMLH

In an interview with TRT World and BBC, Kalın said that the move to turn the Hagia Sophia, which had served as a mosque for nearly half a century, back into a Muslim place of worship had the support of all parties in Turkey.

"There is overwhelming support and consensus on this issue if you look at the political parties, the opposition parties, the republican party, they all supported this issue," he said.

Dismissing claims as untrue that world historical heritage would be "shadowed or destroyed" by the decision, Kalın said: "In regards to the arguments of secularism, religious tolerance and coexistence, there are more than four hundred churches and synagogues open in Turkey today."

All visitors will have access to the religious and cultural heritage of Hagia Sophia including icons and mosaics. Any claim to the contrary is simply false.

Also, there is consensus on opening of Hagia Sophia as a mosque as it is supported by opposition parties in Turkey. pic.twitter.com/6yPqO7wJnd

On Twitter, Kalın said that all visitors would have access to the religious and cultural heritage of the Hagia Sophia, including its icons and mosaics.

"Any claim to the contrary is simply false," he said.

President Erdoğan said the historical complex would be ready for worship by July 24 for Friday prayer. 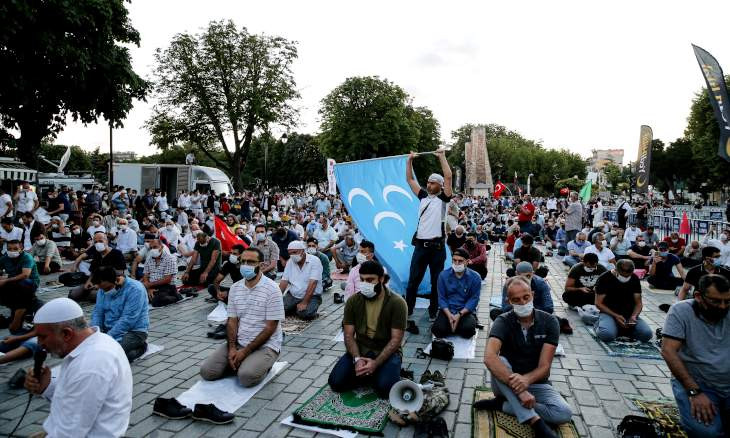