Presidential spokesperson İbrahim Kalın has said that triggering debates on establishing a caliphate and regime change aims to divert Turkey from its goals, as he commented on the cover of a magazine and a top religious official's remarks.

In an interview with broadcaster CNN Türk, Kalın said that these debates would lead to "unnecessary polarization."

Gerçek Hayat, a magazine owned by pro-government Albayrak Media Group, called for the establishment of caliphate in Turkey in its issue dated July 27, while also praising the decision to turn Istanbul's Hagia Sophia into a mosque. 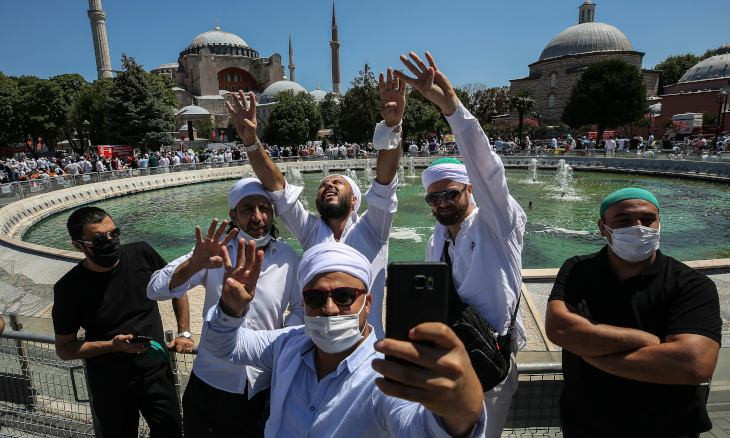 "If not now, when? If not you, who? Get together for a caliphate," it added.

Erbaş, who often sparks anger with his remarks, was slammed by the opposition, while also thousands called on him to resign.

"We can never accept damning [someone] at a place like Hagia Sophia as a correct approach. Neither our president nor our friends had such an attitude," Kalın said.

Referring to Erbaş's "damning" of Atatürk over turning Hagia Sophia into a museum, Kalın said, "It wouldn't be a good-intentioned evaluation to draw the conclusion that he insulted Atatürk."

"The fact that these are turning into regime change debates constitutes a false agenda. Turkey doesn't have such an agenda. The Turkish Republic's principles were determined with the constitution," he said.

"Our aim should be to bring Turkey to where it should be in 2023 based on the democratic will of the people and within the scope of the social state of law of secularism principles," Kalın added.

The spokesperson noted that the said two debates overshadow the reopening of Hagia Sophia as a mosque.