A committee from Swedish Left Party on Oct. 6 paid a visit to the Peoples' Democratic Party (HDP) headquarters in the capital Ankara amid a government crackdown on the party. 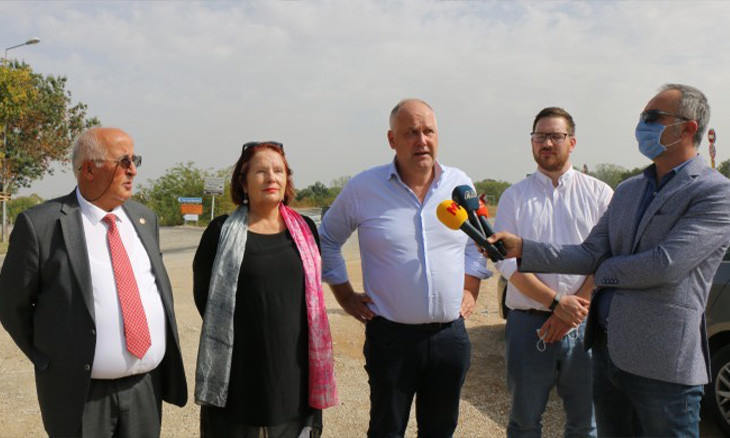 The visit of the delegation, led by Left Party Chairman Jonas Sjöstedt, came a day after they were denied a visit to former HDP co-chair Selahattin Demirtaş in Edirne Prison. On Oct. 7, the Swedish committee also paid a visit to the HDP parliamentary group as well as the party's Women Council.

Following a meeting with the delegation, HDP co-chair Pervin Buldan held a press meeting saying that such acts of “solidarity” with the party gives a morale boost.

Sjöstedt said that they had been barred from seeing Demirtaş although they had notified the Turkish authorities regarding the issue in advance.

“But I assure you that we will keep coming, even if they do not let us see him, and this will go on until Demirtaş is free. Demirtaş and [former HDP co-chair Figen] Yüksedağ are representatives of thousands of political prisoners in Turkey,” he said.

“We know why Demirtaş, Yüksekdağ and thousands of other political prisoners are in jail, because the rulership is scared. The HDP is giving a struggle for democracy and peace.”

Sjöstedt said that they are “very concerned” not just with regards to the Turkish government's crackdown on the HDP, but also Ankara's “interventions abroad.”

“We have concerns that the region's several places can turn into a second or third Syria. In such an environment that includes so much aggression, the HDP chose wisdom, logic and dialogue. And silencing this voice will be a very big loss for Turkey,” he said.

Turkish authorities last week locked up 17 HDP senior members on charges stemming from days of protest in southeastern Turkey in October 2014 when ISIS was threatening to take over the Syrian border town of Kobane.

Turkish authorities said the Kurdistan Workers Party (PKK), designated a terrorist group by Turkey, the United States and European Union, incited the Kobane protests and that the HDP supported them.