"A politician should address a politician. Kılıçdaroğlu's remarks on the First Lady are utterly inappropriate. We strongly condemn it. Verbal violence is a significant part of violence against women," ruling Justice and Development Party (AKP) spokesperson Ömer Çelik said on Oct. 27.

"The style of making politics over families and women is outright violence, disrespectful and needs to be condemned," Çelik added.

Earlier on Oct. 27, Kılıçdaroğlu called on the First Lady to burn her Hermes handbag in the garden of the presidential palace if the government is so sincere on President Recep Tayyip Erdoğan's call to boycott French goods.

Kılıçdaroğlu said that the people already can't purchase French goods due to the economic downfall of the country.

"Can the citizens buy French goods? The presidential palace socialite can implement the boycott. They have French-made planes, sell them immediately," Kılıçdaroğlu told members of his party at a parliamentary group meeting.

"Mrs. Emine has a [Hermes] bag. She should burn it in the garden of the presidential palace and say, 'I protest [France],'" he added.

Emine Erdoğan's Hermes handbag has created controversy in the country due its cost being $50,000 when she was using it in 2019.

A day later, Erdoğan responded to Kılıçdaroğlu's call on her wife, asking, "What kind of politician are you?"

"Mr. Kemal said some words about my wife yesterday. If you have the guts, talk about me. If you're a politician, talk about me," Erdoğan told AKP members in parliament on Oct. 28.

"If you're looking for bags to burn, you and your friends have a lot of them," he added.

He also responded to Kılıçdaroğlu's call to French-made planes, asking, "What does it have to do with anything?"

"The Airbus is a strategic product. They are not only made by the French, you are pathetic," Erdoğan said. 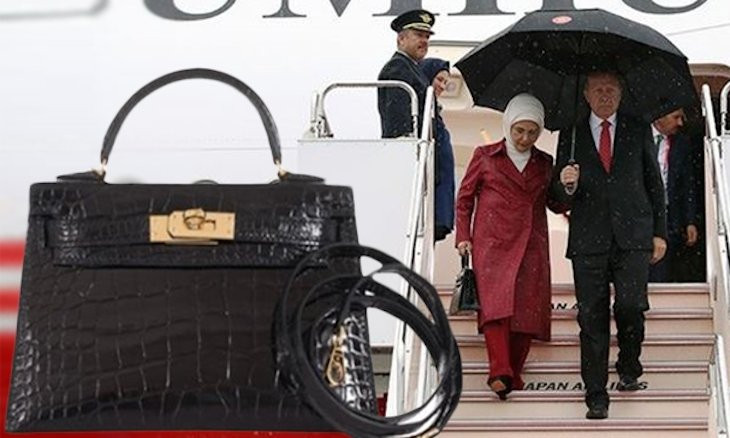