Salahaddin's previous job was at a shoe factory in the city of Gaziantep, where he was paid the minimum wage. He was treated fairly by his Turkish boss, who acknowledged that the 32-year-old Syrian, a former teacher of accounting at a private university in Aleppo, was overqualified for the job.

Now employed as a salesman in the Iranian Bazaar, where most of Gaziantep's Syrian-owned businesses and shops are located, Salahaddin was then and is now much better off than hundreds of thousands of his fellow countrymen, who are easily exploited in Turkey because of their precarious status. Many are forced to work under the table jobs in grueling conditions for meager pay in order to survive.

Due to conditions in the region and its generous open-door policy, Turkey is now host to the world’s largest community of Syrians displaced by the ongoing conflict in their country, a number approaching 3.5 million. Syrians in Turkey have been granted temporary protection status since 2011 as legal and administrative regulations do not allow them to be recognized as refugees. The integration policy of Syrians has become an important debate in Turkey, as it is unlikely that they will return to Syria any time soon.

Turkey's southeastern Gaziantep province has the second-highest population of Syrians after Istanbul, hosting more than 451,000 which constitute about 20 percent of the province’s total population. Since Gaziantep is very close to the Syrian border, most of the Syrians who have fled the country over the course of the war preferred to move here for geographical reasons, as well as similarities in culture and religion. Over the course of nine years, most of the Syrians who were registered in Gaziantep have set up their own businesses and started to be integrated into Turkish society through the labor market. Yet Syrian refugees in Turkey still face challenges in terms of work permits, low-paid jobs, safety and discrimination.

Syrian refugees who are under temporary protection status have not benefitted from the Law on Work Permits for Foreigners passed in 2003 or the Law on Foreigners and International Protection in 2013. After the introduction of the Regulation on Work Permits for Foreigners under Temporary Protection in 2016 which guaranteed Syrian refugees the right to access the labour market in Turkey, Syrian refugees gained the right to apply to the Ministry of Family, Labour and Social Services for work permits, with specific conditions. The applications can be only made by the employer rather than the refugee, and Syrians can only work in the province in which they are registered.

Muhammed, who was working in a textile factory with very good conditions in Aleppo before he moved to Gaziantep, explained why he opened a grocery shop instead of continuing to work in the same industry. “I found out that there are many job opportunities here in the manufacturing and textile industries, but the conditions are really bad as employers are likely to hire refugees illegally without any insurance. I decided to open this grocery store with the help of an organization that works with Syrians to obtain work permits easier,” Muhammed said, adding that without their support, it would take more than six months to obtain the permit.

The employment quota is the other obstacle, as Syrian refugees cannot be more than 10 percent of total employees in a given workplace. According to a recent report on social acceptance and integration of Syrians in Turkey, more than half of Turkish nationals believed that Syrians were taking their jobs, while half indicated that work permits should never be granted to Syrians.

According to the Ministry of Family, Labor and Social Services, the number of work permits that have been given to Syrian nationals is just 34.573. Research conducted by International Labor Organization (ILO) shows that Syrian refugees in Turkey have been employed mostly informally in low-skilled jobs in seasonal agriculture, manufacturing and textile sectors as informal sector, which results in a lack of security, unsafe working conditions and child labor. As the participation of Syrian refugees in the informal sector has increased, this has resulted in heightened competition for jobs and a decline in wages in sectors where the majority of Syrian refugees work since they are paid less than the minimum wage.

Salahaddin opened up about his experience seeking asylum in Germany. “I was working as an accounting teacher in a private university in Aleppo. I was taking German language classes there in order to reach Germany some day. When the war started, I couldn’t find time to apply to Germany in a formal way because of the military service obligation in Syria so I came to Izmir to pass to Greece illegally, but things didn’t go well”.
Though he was lucky to find an employer in Gaziantep who treated everyone fairly, he was forced to work at the factory to survive, eke out a living and pay his bills. “I was isolating myself as the majority of the workers are low-skilled,” he said.

Despite ongoing livelihoods programs which provide Syrians with  market-oriented vocational and technical training by non-governmental organizations in partnership with the municipality and public schools, surveys show that many Turkish employers are likely to hire Turks instead of Syrians. Turkey's official unemployment has reached 13.2 percent.

However, in cities like Gaziantep where the Syrian population is high, a majority of the employers hire them to work as 'illegal blue collars' in industrial sites below the minimum wage. ILO research revealed that a third of Syrians were earning below the minimum wage, while a third of the Turkish enterprises that were interviewed said they would never employ Syrians

In terms of insecurity in the industrial areas, most Syrians have concerns about the inspections that are conducted by the government. “My Syrian neighbor who works in one of those factories more than 45 hours a week is paid half of the minimum wage, and there is no complaint mechanism since they are afraid of kicked out of the country” said Muhammed, adding that he would probably be earning half of his current salary if he was still working in the textile sector.

Although Syrians have stated their desire to engage in working life and make their own living as their stay in Turkey has extended, this situation has created tension among the locals who live in the provinces where many Syrian refugees have settled. However, despite  efforts toward social cohesion and social acceptance, discrimination against Syrians is an issue in the labor market.

“I don’t remember any discriminative or racist behavior from my Turkish coworkers when I was working in Gaziantep in 2016,” said Muhammed, adding that the only problem was the lack of communication due to language differences. “However, what I am hearing from my friends is that Syrians continue to face a rise in discrimination in the industry as the Turkish economy is shrinking and people have started to blame Syrians.”

As Turkey’s culinary capital, the high number of Syrian-run restaurants and cafes in Gaziantep have been affected by the pandemic. Within the scope of new measures to stem the spread of the coronavirus, the Interior Ministry has imposed partial weekend curfews and is only allowing restaurants to provide takeaway and delivery service. Syrians in Gaziantep that have businesses in the food sector told me that there is already a decrease in demand as people are afraid to go out due to the high number of coronavirus cases in the city.

Hassan, who has been running a falafel shop for 7 years and opened a new branch in the city Kilis next to the Syrian border just before the pandemic, is among these struggling business owners: “Forget about the tables that we removed now, sales have already decreased and we don’t know whether employers will be supported,” said Hassan. 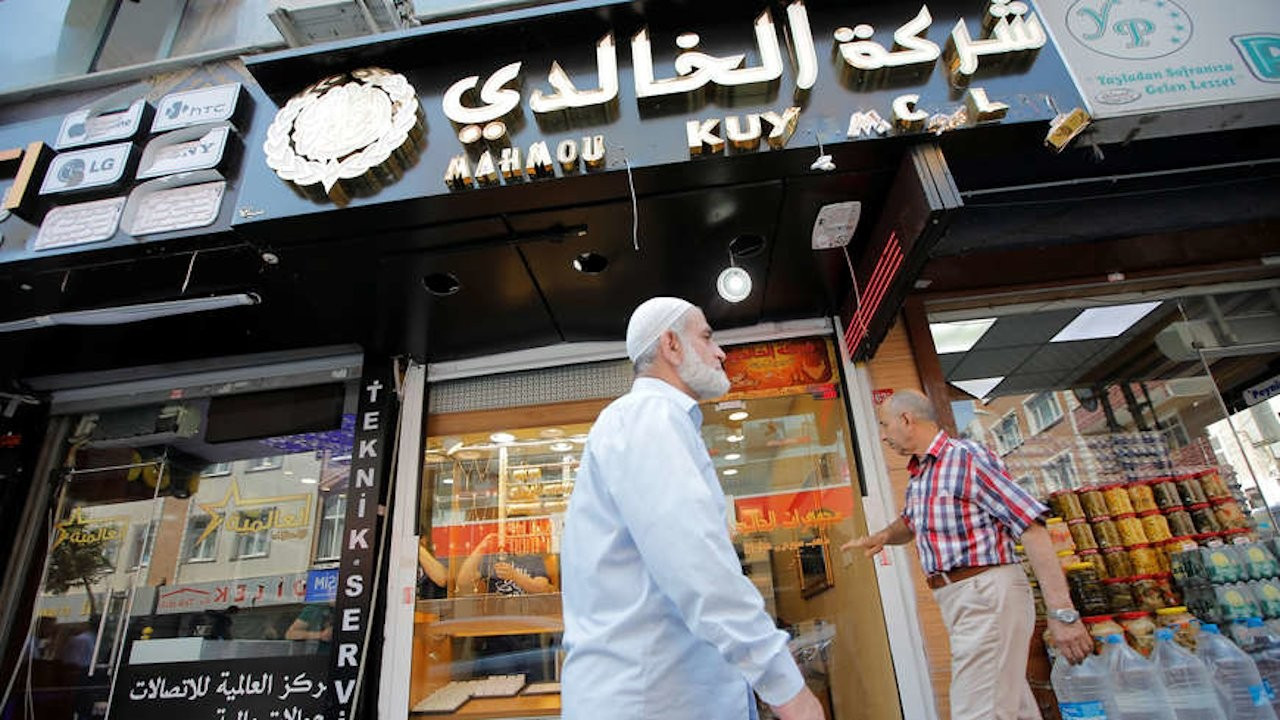 Nazlı Avşaroglu graduated from Boğaziçi University with a master’s degree in social policy and with a bachelor’s degree in international relations. Prior to joining as UN staff in Turkey, she worked in several UN agencies in different locations. Her areas of specialization include international migration and public policy, peacekeeping, cash-based transfers, social inclusion targeting vulnerable groups, and project management.