Hundreds of thousands of people gathered for a rally in Istanbul on May 21 to protest the conviction of the head of the main opposition Republican People's Party's (CHP) Istanbul branch, Canan Kaftancıoğlu, for "insulting" the president and the state.

Demonstrators in the central district of Maltepe chanted songs and waved the opposition and national flags. The CHP announced that according to their findings, approximately 600,000 attended the rally.

Families of people who lost their lives during the Gezi protests and who were arrested in the Gezi Park Trial took the stage at the rally. Speaking on behalf of the families, Meriç Kahraman said, "The way to realize our dreams is to insist on the demand for freedom, equality and fraternity and to be in solidarity together. Gezi is an unquenchable hope for equality, freedom and democracy."

CHP head Kemal Kılıçdaroğlu also took the stage during the rally and said, "No one should despair; the reign of thieves is falling." "We will soon hug each other freely in the squares, streets, factories and universities of this city. Don't worry, it's almost time," Kılıçdaroğlu said.

Speaking on the recent bans on the cultural life, Kılıçdaroğlu added: "They ban concerts, they cannot tolerate Kurdish music. They are dragging the artists in the court corridors. There is a word that does not fall into the hands of the [Presidential] Palace and its affiliates: That ban, this ban, that ban... There is no entertainment for young people in the palace regime. There is gambling, there are those who go arm in arm with drug lords. Murders of women, murders of workers, preparations to assassinate politicians... We will fight until the end and we will win! They want to create a permanent atmosphere of insecurity to block our just cause, they will not succeed, we will win, I promise."

"I would like to address the young conservatives here: These problems are our problems. This is your problem too. Conservative women, the mentality that forbids politics to our provincial head [referring to Kaftancıoğllu] wants to cut your alimony, wants to enslave you. You have to raise your voice about what happened to Kaftancıoğlu. Because the same will be done to you," Kılıçdaroğlu said.

The Court of Cassation, Turkey's highest court of appeals, last week found Kaftancıoğlu guilty of “insulting a public official,” “explicitly degrading the Turkish Republic” and "insulting the president" and upheld her sentence in three separate cases.

Kaftancıoğlu has been credited as the person behind Istanbul Mayor Ekrem İmamoğlu's election success. The CHP’s victory in the 2019 local elections in the megacity ended the 25 year-rule of the ruling Justice and Development Party (AKP) and its predecessor Welfare (“Refah”) Party. 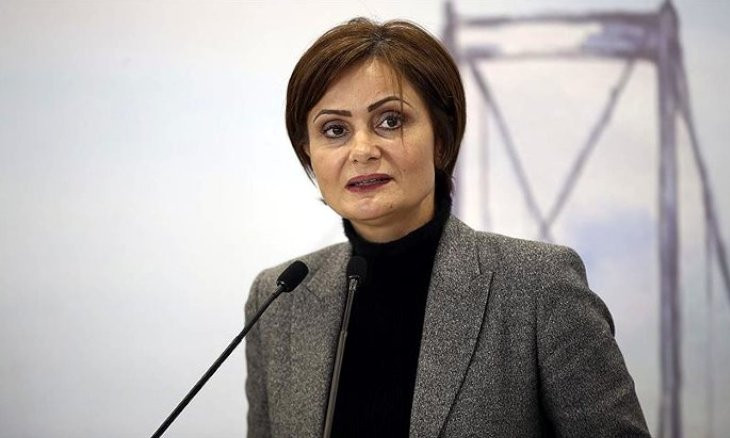