A Turkish court has arrested a man over his criticism of the government during a street interview in the southern province of Antalya.

The 49-year-old İsmail Demirbaş was initially detained during a police raid on his house on Oct. 24. The investigation against Demirbaş was launched after he said Turkey needs early elections as soon as possible so that “we get rid of the bloodsucking vampires.”

In remarks made to a YouTuber, who broadcasts street interviews on his channel called “Kedine Muhabir” (The Self Reporter), Demirbaş said that the Turkish government was utilizing a “manipulative” system similar to the one used during the reign of Nazi Germany. He said that President Recep Tayyip Erdoğan should stand trial over treason “in a very fast way” and “without any obstacles.”

Demirbaş was released on judicial control, but after he criticized the government in a separate street interview, he was detained once again on Oct. 27. The Antalya resident was released after the second detention and placed under house arrest.

Demirbaş went to the courthouse to file an appeal against the house arrest, but authorities this time ordered his arrest.

The man's son Melih Demirbaş reacted against the arrest decision, telling Duvar: “My father has not done anything wrong. He has gone through a lot just for expressing his ideas. He has not committed a crime.”

“Unfortunately, people are being arrested in this country for expressing their opinions. I demand that my father is released as soon as possible,” he said.

The YouTuber who held the interview with Demirbaş announced on Nov. 10 that he was facing an investigation for another street interview and was called in to testify at the police headquarters.

The investigation against the YouTuber concerns an anonymous citizen’s remarks when he was asked to comment on the resignation of former Finance and Treasury Minister Berat Albayrak, who is also President Recep Tayyip Erdoğan’s son-in-law.

“His [Albyarak’s] decision is very to the point. They were a family company. His father is the president, the son-in-law is the finance minister. His father-in-law must have been behind his decision,” the elderly man says in the video.

“Who would be disturbed about people being handed the microphone, about hearing citizens’ ideas and opinions (be it right or wrong), and why?” the YouTuber wrote on Twitter.

Asked if he had any idea about what happened to the interviewed citizen, the YouTuber wrote that he had been also called in to testify. 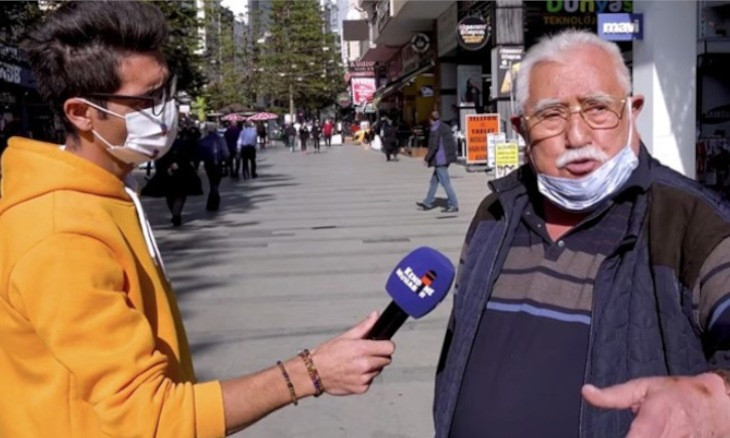