A Turkish court on May 28 sentenced former Peoples' Democratic Party (HDP) co-chair Selahattin Demirtaş to two years and six months in prison over his remarks about former Ankara Chief Public Prosecutor Yüksel Kocaman, who was appointed to the Court of Cassation in November 2020.

Demirtaş was accused of “targeting a public official serving in counterterrorism office.”

The case concerned Demirtaş's remarks during a court hearing that took place in January 2020. Demirtaş vowed that Kocaman, who was at the time the prosecutor dealing with the Kobane investigation, would be accountable in the future for his actions.

“Yüksel Kocaman, there is Allah who is greater than the [Presidential] Palace in which you trust. The wheel is going to turn, and when elections happen, you will be laughing on the other side of your face. You will give an account of all this before the judiciary,” Demirtaş had said during his court testimony on Jan. 7, 2020.

Afterwards, a new investigation was launched into Demirtaş, accusing the renowned Kurdish politician of targeting Kocaman “within the framework of counter-terrorism law.”

During a hearing of the case on April 9, Demirtaş's lawyer Levent Kanat had drawn attention to the fact that proceedings were not based on an objective ground as Kocaman was also previously the prosecutor dealing with the politician's case.

“Yüksel Kocaman was at the time the Ankara Chief Public Prosecutor and a prosecutor under his rule initiated the investigation. Can something logical come out of this?” Kanat had asked.

During the final hearing of the case on May 28, Demirtaş's lawyers requested the politician's acquittal, saying: “All of the lawsuits launched against Demirtaş and his friends are a typical example that an anti-law process is occurring.”

Lawyer Mahsuni Karaman said that if the judges do not give a ruling of acquittal for Demirtaş, they would “do a great harm to Turkey.” “We demand that you put an end to this tragic-comic issue at this point,” he said.

The court handed down a two-year-and-six-month jail term for Demirtaş and did not go for a reduction in his sentence on the grounds of “the crime's manner of being committed and its intention and severity.”

Following the court's decision, Demirtaş's wife Başak Demritaş said on Twitter: "The day will come when law will be necessary for everyone.”

“When not a single investigation is launched into calamitous allegations that come to surface every day, Selahattin has been today given a sentence of two years and six months in jail for saying, 'You will give an account of all this before the judiciary,'" she wrote.

The European Court of Human Rights (ECHR) said in December 2020 that Demirtaş's continued detention on such similar grounds would amount to a "prolongation of the violation of his rights." 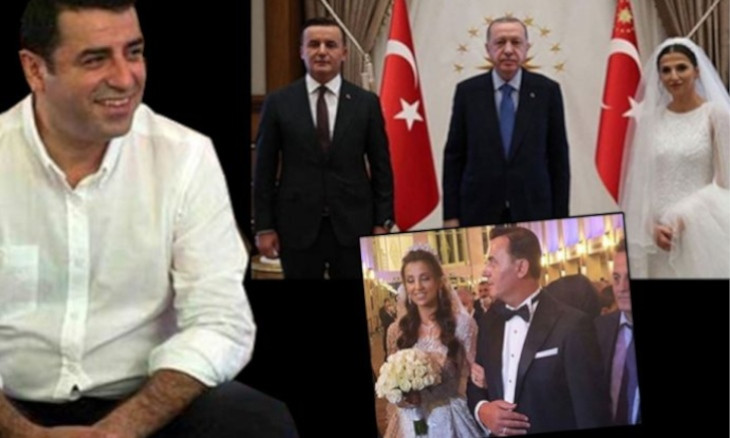