A declaration released by 104 retired admirals on preserving an international convention has infuriated Turkish government officials, who said that the former soldiers' move amounted to suggesting a coup.

The declaration released by the admirals late on April 3 slammed the government for opening withdrawing from the Montreux Convention to debate.

"The fact that withdrawing from the Montreux Convention was opened to debate as part of talks on Kanal Istanbul and the authority to exit from international treaties was met with concern," the admirals said.

Kanal Istanbul, an artificial canal project that aims to connect the Black Sea north of Istanbul to the Marmara Sea to the south, has been President Recep Tayyip Erdoğan's "crazy project." His ruling Justice and Development Party (AKP) says it will ease shipping traffic on the Bosphorus Strait, one of the world's busiest maritime passages, and prevent accidents.

The controversial project has triggered a debate on the revision of the 1936 Montreux Convention, with 126 retired Turkish envoys releasing a statement on April 1 to warn the government.

“Kanal Istanbul will open the Montreux Convention to discussion, and will lead to Turkey’s loss of absolute sovereignty over the Sea of ​​Marmara,” the statement read.

The former diplomats' statement came after Parliament Speaker Mustafa Şentop's remarks on Erdoğan having the authority to withdraw from the Montreux Convention.

"He can say 'I quit the convention.' But there is a difference between possibility and probability," Şentop said on March 24.

Şentop was responding to a question about Erdoğan's authorities on international treaties since the Turkish president withdrew from the Istanbul Convention - an international accord designed to protect women - with a midnight decree on March 20.

The Montreux Convention grants free passage to all civilian vessels and determines the mode of entry and length of stay, as well as the tonnage, of warships from all non-littoral countries in the Black Sea.

Once completed, Kanal Istanbul will provide a shorter way for naval vessels from non-littoral countries to reach the Black Sea, so long as they pay the necessary fees.

But, if no further abrupt revision is made to the Montreux Convention, these vessels have to respect the rules of Montreux as they will enter Kanal Istanbul from the Dardanelles straits that are still determined by this decades-long international regime.

The former admirals on April 3 praised the convention, as they urged the government to refrain from opening it to debate.

"We believe that all sorts of remarks and acts that would lead to discussions on the Montreux Convention, which holds a significant place in Turkey's survival, should be refrained from," they said in the declaration.

The former soldiers also slammed a picture reportedly showing an admiral, who is allegedly a member of a cult, in Islamic clothing.

According to the retired admirals, the Turkish Armed Forces (TSK), especially the Naval Forces Command, suffered from "attacks" carried out by the network of U.S.-based Islamic preacher Fethullah Gülen and hence should preserve its constitutional values, mainly secularism, determined by Mustafa Kemal Atatürk, the founder of modern Turkey.

"Otherwise, the Turkish Republic may face the risk and threat of experiencing the most dangerous incidents for its survival, which have examples in history," the admirals said, prompting Turkish government officials to slam the declaration for "suggesting a coup."

"Stay where you are. That Turkey is now in the past! This nation showed how they defeated putschists to everyone on July 15. Know your place!" Presidential Communications Director Fahrettin Altun said on April 4, referring to the July 15, 2016 failed coup attempt.

"Who are you? How can you point your finger at the legitimate representatives of the national will?" Altun asked, noting that the "pawns of foreign powers won't be able to stand in the way of Turkey."

Altun also shared a picture of the Presidential Communications Directorate headquarters with its lights on, saying, "We're under our people's orders."

"The people have the final say. These lights will be on for our people against all antidemocratic attempts," Altun said, falsely noting to the fact that the statement was released by 103 individuals 103 days before the anniversary of the July 15 coup bid.

Vice President Fuat Oktay likened the soldiers to "cowards whistling in a cemetery."

"If you can dare, bring it on," Oktay tweeted.

Şentop said that there is a difference between expressing one's opinions and "preparing a declaration that suggests a coup."

AKP deputy leader Numan Kurtulmuş was also infuriated, as he deemed the admirals "lovers of old Turkey who see themselves above the will of the nation."

"They try to give advice to the politicians with their so-called declaration. Those days are long gone! Know your place!" he said shortly after the soldiers' statement.

Any joint statement or declaration that's critical of the government, especially if they are released by former soldiers, are deemed coup attempts by the AKP and its far-right ally Nationalist Movement Party (MHP).

Erdoğan's spokesperson İbrahim Kalın on April 4 said that the statement "reminiscent of coup periods" made the former soldiers "a laughing stock."

"Know your place and stay where you are," Kalın said.

Following major backlash from the government, the Ankara Chief Public Prosecutor's Office launched an investigation into the signatories of the statement.

'Declaration does nothing more than harming democracy'

The Defense Ministry, meanwhile, said that they have confidence in the judiciary to do what's necessary against the former admirals.

According to the ministry, the declaration does "nothing more than harming democracy and making the enemy happy."

"The Turkish Armed Forces, which is aware of the gains and losses of international agreements, can't be made into a tool of the ambitions and personal interests of individuals who have no duty or responsibility," the ministry said. Many Turkish people against Istanbul Convention mistake it for Montreux Convention: PollWomen 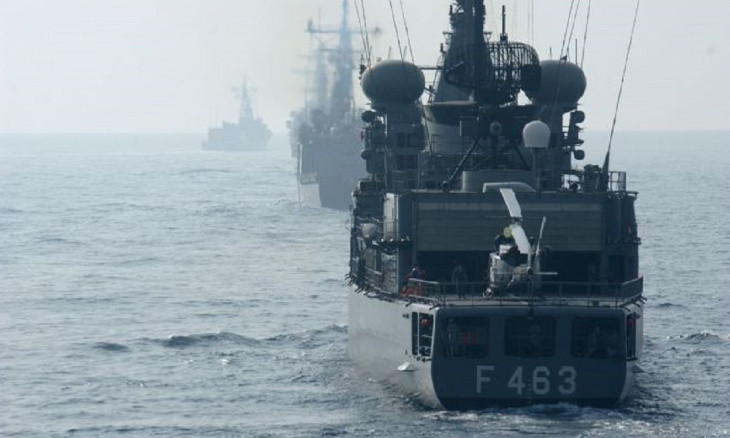