On Dec. 28, 2011, residents of a village bordering Iraq were awakened by the sounds of Turkish warplanes flying dangerously closeby. They didn't know that the night would bring them suffering at the most unbearable levels.

The night was dark, the bombs were falling from F-16s and dozens of people were dead. When the night turned into day, the scope of the horror that this border village experienced was revealed. It was a massacre.

Following the airstrikes, Turkish authorities said that they thought those near the Iraqi border were militants of the Kurdistan Workers' Party (PKK), when in fact they were only smuggling goods - a widely-known means of living for the people in the area.

Nine years have passed since the Roboski massacre but the families' wounds remain unhealed. Ferhat Encu, who lost 11 of his relatives in the airstrikes, said that the village is in a constant state of mourning, with women still wearing black and no celebrations being held.

"This was a deliberate and planned massacre," Encu, who is a former deputy of the pro-Kurdish Peoples' Democratic Party (HDP), told Duvar English, adding that the villagers are still grieving since those who carried out this massacre weren't brought to justice.

"The state left the families alone with their pain after bombarding the area for 45 minutes. The families carried what was left of their loved ones with their own hands," he said.

The Roboski families are currently looking for ways to relaunch the legal process.

"The domestic legal means need to be exhausted once again in order for us to take our case to the ECHR," Encu said.

"It's like looking for a needle in a haystack."

In the nine years that passed, the families were met with all kinds of state oppression as if it wasn't enough pain for them to lose their relatives in a massacre. The state's attempt to cover up the crime never ceased.

"Because we talk about the state's crime, we were met with pressure, detentions, fines, arrests and all the tools of a politicized judiciary. We were subjected to threats and pressure from local administrators and security forces," Encu said.

"We continued to resist," he added.

Even currently, 16 villagers, including mothers who lost their children in the airstrikes, are accused by the Şırnak Heavy Penal Court of making PKK propaganda through commemorating their loved ones and chanting slogans during commemoration ceremonies.

"This is the type of judicial mechanism and attack that the Roboski families face," said Encu, who himself served three years in prison on charges related to the PKK.

"My brother was handed five years in jail. This is the state mentality that we are facing and it decreases trust in the judiciary," he said.

A crime against humanity

Noting that they sought help from all sorts of authorities in the past nine years, Encu said that they also met with President Recep Tayyip Erdoğan, who was the prime minister at the time of the massacre, but no results were obtained from their meeting.

In his first statement after the incident, Erdoğan targeted the media for reporting the killing of the civilians and thanked then-Chief of General Staff Gen. Necdet Özel and the force command for their "sensitivity despite the media."

"It's a group of 30 to 40 people. There are mules and people. How can we know who is who from that height? It's impossible. The TSK fulfilled its duty sincerely. We announced that we will give compensation, but some people abuse this issue," he said, although the families refused to accept any money from the government.

Later on, Erdoğan said that he won't allow the perpetrators of the massacre to go unpunished - a promise that's long forgotten.

Encu said that the perpetrators will eventually be tried since there is a crime committed against humanity.

"The statute of limitations doesn't work in this case. The governments will change and those responsible will be held accountable," he said.

When asked whether the families still expect justice, Encu said that they don't expect anything from Turkey's judicial system or the government.

"What holds us together is the will to bring those responsible to account. We will be hopeful once the ruling understanding changes in this country," he said.

While adults have been mourning since 2011, the massacre took its toll on the generations to come as well.

"The children grow up affected by the mood of their families. At each anniversary, the families watch footage from the past and cry. The children as young as three years old ask why tears are being shed. Families have to respond by saying, 'Your relatives were killed there.' So the children try to grasp what death is and the emotions it entails. They then ask who killed their relatives and the response leads to the development of hatred and fear," Encu said.

"They will run away from a soldier, police or any other state official. These children are growing up like this. They are being raised knowing that they are subjected to pain and injustice and so they're afraid. This is the mood of the people here," he added.

"We have no hope that justice will come to Roboski. We have pain and tears here. Our suffering won't end unless justice is served," Mehmet Encu told Duvar English.

"Erdoğan told us that he wouldn't allow the perpetrators to go unpunished, but they did. We won't stop searching for justice until those guilty pay for their crimes," he said.

Keskin: The state's attitude has always been the same

Despite the gravity of the crime, the families only have the HDP and several rights groups by their side in their quest for justice. The remaining opposition parties, such as the main opposition Republican People's Party (CHP), are silent on the issue.

The co-chair of one of those rights groups, Eren Keskin, said that there has always been impunity in the crimes committed by forces of the state, citing mainly the notorious 1990s that was marred by severe human rights abuses in the Kurdish majority cities.

"The state's attitude has always been the same," Keskin, a prominent lawyer and the co-chair of the Human Rights Association (İHD) told Duvar English, adding that the state used every tool it has to deny its responsibility in the Roboski massacre. 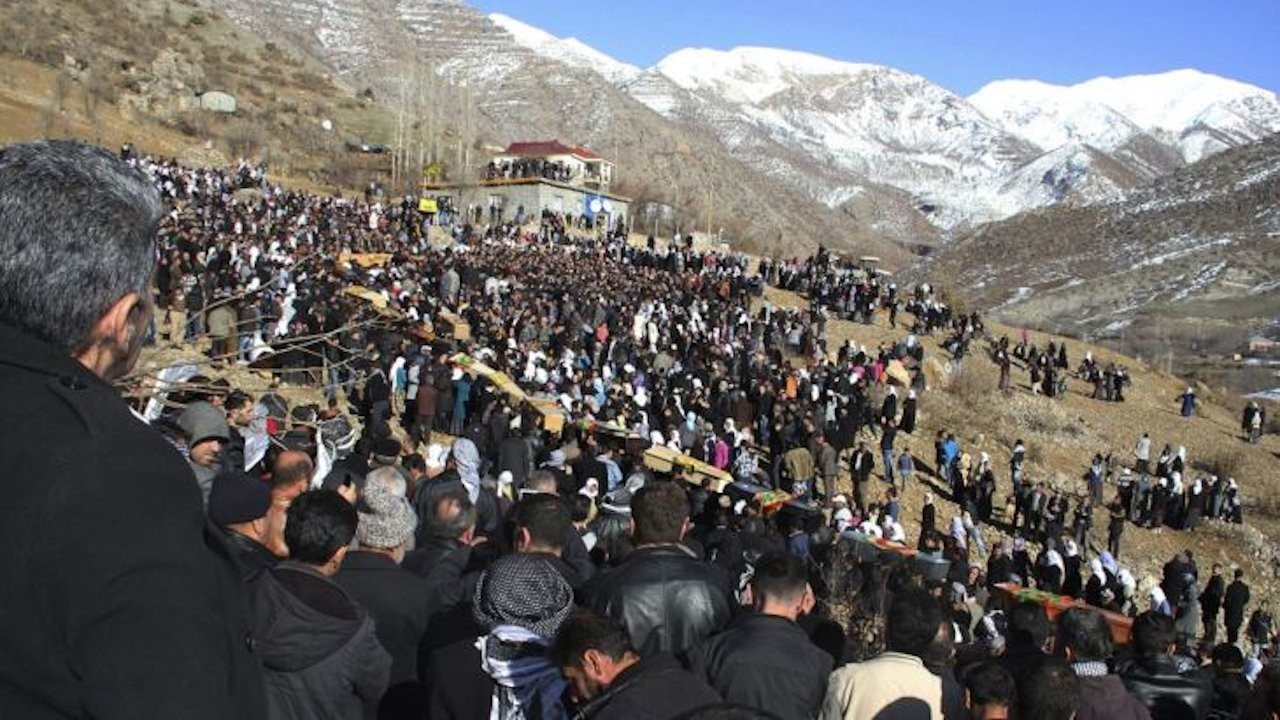 According to Keskin, the difference between the 1990s and today is the amount of knowledge regarding the perpetrators.

"We didn't know who was responsible back then. But in this case, people were openly bombed and killed by F-16s and the state said, 'It's not my fault.' An unimaginable situation took place," she said.

When asked whether she expects justice to be served, Keskin had a pessimistic tone.

"This is a geography of genocides. No one has ever been able to access justice. You are deemed a 'terrorist' when you talk about the rights violations committed by the state," she said, adding that the opposition's demand for shedding light on the state's crimes is crucial.