Turkish Health Minister Fahrettin Koca and two professors from the ministry's Science Commission have warned against the sharp increase in coronavirus (COVID-19) cases.

The 1,083 new COVID-19 cases on Aug. 4 reflect a "severe" rise after a four-day holiday weekend, Koca wrote on Twitter, urging people to avoid unnecessary contact so that their vacations do not have grave consequences.

"We must prevent the environment that included physical contact during Eid al-Adha and holidays from causing severe consequences. We are all responsible for each other. We need to unite in taking precautions," Koca said on Twitter while also sharing the daily chart that revealed 18 new deaths and the ratio of patients with pneumonia at 8.5 percent.

New cases had hovered just below 1,000 since July 13 in the country that started normalization on June 1. President Recep Tayyip Erdoğan's government had called 1,000 a critical threshold to reconsider rules.

The government has not publicly disclosed the number of critical care or intubated patients since July 29, raising questions among some experts even while more than 40,000 tests have been logged daily.

Also on Aug. 4, Ankara Mayor Mansur Yavaş said that the increase in the number of cases returned to the levels seen at the first days of the pandemic in the capital.

"We have increased our precautions to the highest level and put limitations on the visits to our municipality over health concerns," Yavaş said in a tweet.

"I invite all of my fellow citizens to abide by precautions," he added.

Prof. Levent Yamanel from the Science Commission, meanwhile, said that new decisions may be adopted on when to open schools if the number of cases increases when people return from holidays.

"The number of cases are being followed daily. If it increases, new decisions may be adopted regarding reopening schools," Yamanel said, adding that the process is a dynamic one.

Saying that the R-value in Turkey has once again rose above 1, Yamanel noted that it indicates an increase in the spread of the virus.

"The risk of a second peak is out of question for now, but the next 5 to 10 days are significant," he said. 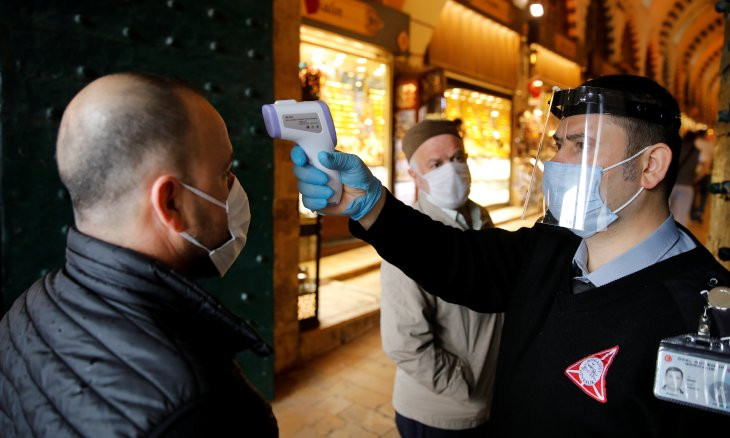 "Should we share a picture of a patient struggling with suffocation because of the virus? Should we make the people listen to the sounds coming from patients' lungs?" Okyay asked, adding that the normalization process is managed poorly.

"The normalization began without taking gradual steps and the people were misled," she also said.

On Aug. 4 Turkey adopted daily quarantine inspections, new tracing oversight in all cities and measures for weddings, funerals and other large gatherings, even while it avoided broad curbs on economic activity.

The Interior Ministry said the nationwide rules - including some fines for violations - were needed to sustain the fight against the pandemic.

The central city of Kırıkkale will pilot a new call center that checks complaints about citizens ignoring face masks and other rules, and for a "safe area" rewards system for business that abide them, the ministry said.