Turkey's most prestigious university went through a nightmarish night on Feb. 1 due to intense police brutality and homophobia that surrounded the campus.

A total of 159 Boğaziçi University students were detained on Feb. 1 for protesting President Recep Tayyip Erdoğan's appointment of Melih Bulu as the rector and 98 of them were released early on Feb. 2.

Protests against Melih Bulu's appointment have been ongoing since Jan. 2, with both the students and academics slamming the anti-democratic move.

A large group of students gathered in front of the campus on Istanbul's Hisarüstü district on Feb. 1 to protest, but they were met with police violence. Snipers were seen positioned on rooftops as well.

While Boğaziçi students were battered by police, members of Islamic fundamentalist Anatolian Youth Association (AGD) - the youth branch of the Islamist Felicity Party - were freely spreading hate in front of Istanbul University.

On the left side: Boğaziçi University students peacefully protesting are met with police brutality.

The police response to the Boğaziçi protests came following the statements from the ruling Justice and Development Party (AKP). Since Jan. 29, the students are targeted over an art exhibition that featured a picture of Kaaba - a holy site for Muslims - with LGBT flags attached to its corners. 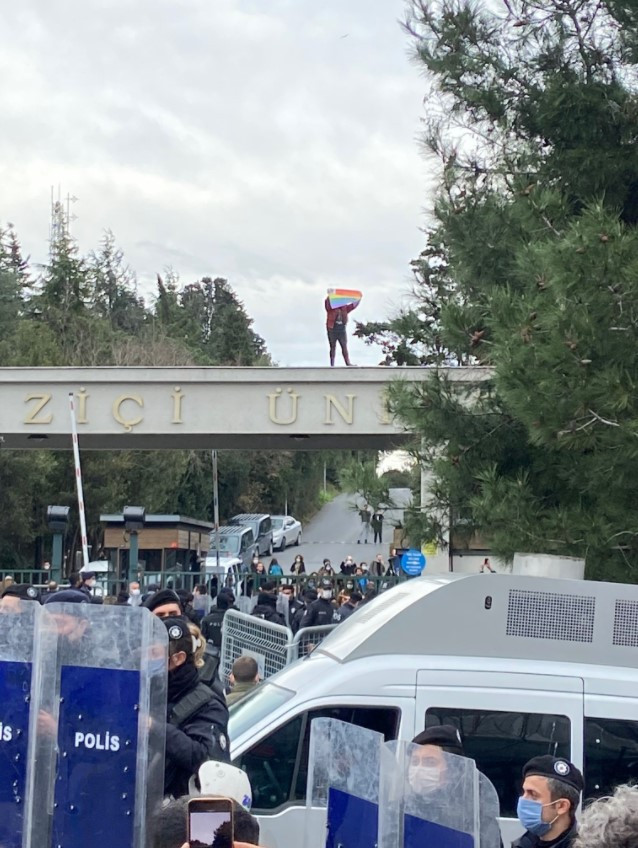 According to the government, which has significantly ramped up its Islamist tone in recent years and increased the role of the Religious Affairs Directorate (Diyanet), the students disrespected religious values. Two students were arrested on Jan. 31 and two others were placed under house arrest over the incident.

While it's a known fact that the institutions are no longer independent in Turkey, the judiciary and police are the ones that act most swiftly under the orders of Erdoğan and his AKP. Statements that target certain individuals or groups are often followed by detentions, arrests or even physical assaults.

Earlier on Feb. 1, Erdoğan praised his party's youth for not being LGBT, adding to the ongoing homophobic discourse. His ally, Nationalist Movement Party (MHP) leader Devlet Bahçeli, also joined the hate choir via mentioning the use of the Kaaba picture at Boğaziçi University, calling the LGBT flags "rags." His choice of words was also interesting as he made the LGBT community seem like an illegal organization by using the term "LGBT-I."

In light of all the homophobic statements, many expected a harsh police response to the protests that demand nothing more than Bulu's resignation and democratic rector elections. Despite this expectation, however, the students were left alone in their resistance, as lawmakers from the Peoples' Democratic Party (HDP) were the only opposition figures present.

Detentions and police brutality continued for hours around the campus and later in it when students gathered around the rectorate building with the demand to talk to Bulu. Students' attempts to live broadcast the events were prevented by the police. Dozens of students were battered by police and suffered from injuries.

All the while, another controversy unfolded in the university. Bulu, who lacks democratic values and sufficient credentials to be the rector of Boğaziçi University, finally found his aides a month after his appointment. Academics had refused to work with him until Feb. 1.

Prof. Gürkan Kumbaroğlu from Industrial Engineering assumed the role, prompting backlash from academics and students for accepting Bulu as a legitimate rector. Dr. Oğuzhan Aygören was reported to have accepted to be the advisor of Bulu, which immediately drew ire on social media since he is a founding member of the opposition Democracy and Progress Party (DEVA).

Surprisingly, DEVA leader Ali Babacan - a former AKP heavyweight - was sending tweets in support of the Boğaziçi students at around the same time of Aygören's appointment. Other DEVA members joined Babacan in sending support to the students.

Upon hours of silence on the issue, Aygören released a statement early on Feb. 2, saying that he didn't assume the role and that he doesn't accept the heavy police presence around the campus.

"It's impossible for me to accept this appointment," Aygören said, although he was met with skepticism since his pictures with Bulu and Minister Soylu emerged on social media.

Criticism against the main opposition Republican People's Party (CHP) was also widespread on social media, since its deputies remained mostly silent on police brutality. After hours of calls for Istanbul Mayor Ekrem İmamoğlu and CHP leader Kemal Kılıçdaroğlu to release statements, they sent tweets in support of the students.

"Rector Melih Bulu should resign and put an end to this ugly situation," Kılıçdaroğlu said.

"I discussed the situation at Boğaziçi to related authorities. I demanded the establishment of a dialogue and my initiatives will continue," İmamoğlu said.

Boğaziçi University Alumni Association (BÜMED) chair Önder Şahin, meanwhile, said that he held a meeting with Bulu on Feb. 1 to prevent police intervention and establish a dialogue between the students and him.

According to Şahin, he asked Bulu to go out of the rectorate building and talk to the students, but he refused over "security risks."

The hate speech against the LGBT community continued on Feb. 2, with Presidential Communications Director Fahrettin Altun announcing that Boğaziçi's LGBT club was shut down.

"As you can see, the university administration took a legitimate step against those trying to trample on our holy values," Altun said, intentionally making a false claim that the protests around the rectorate building stemmed from this decision.

Since the Kaaba picture incident, the government has been trying to link the protests against Bulu's appointment to the LGBT community to gain the support of Islamists in Turkey. The students were earlier called "terrorists."

Also on Feb. 2, Boğaziçi University academics continued their protests against Bulu, this time by carrying the names of the students detained the night before. They also chanted slogans that called for Bulu to resign. 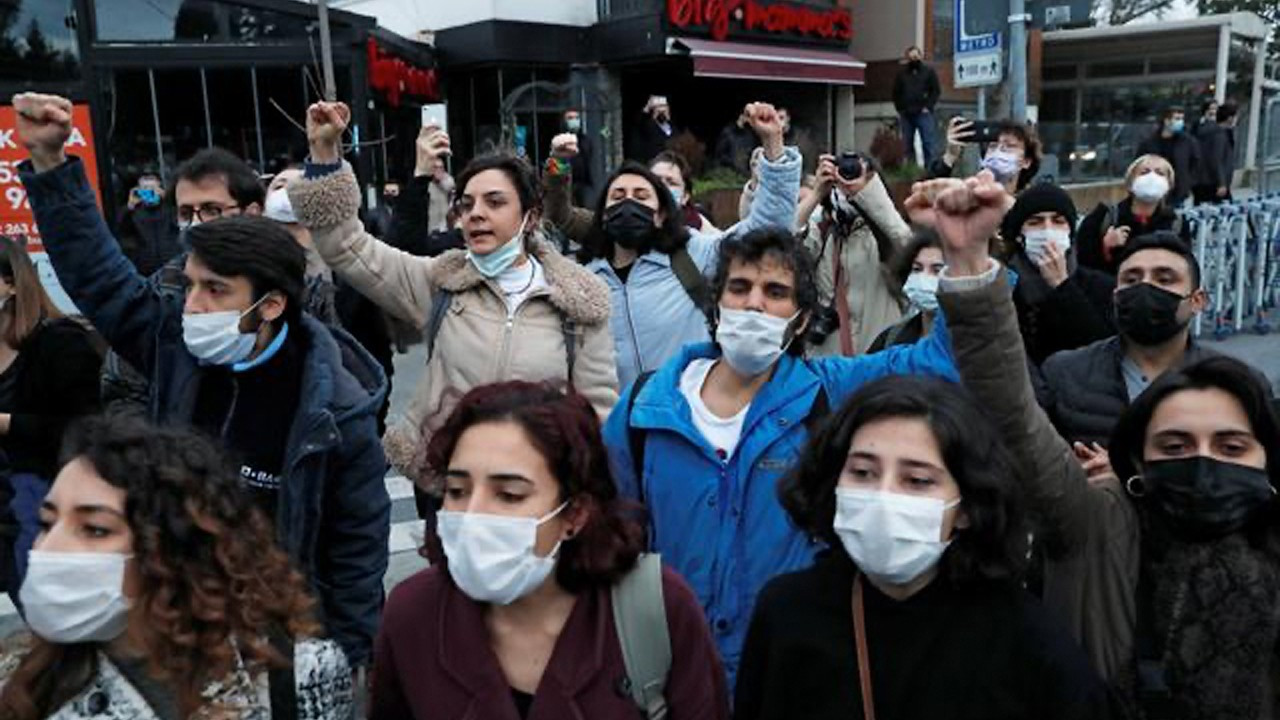