Turan on Sept. 19 said that Macron "has been dreaming of becoming another Napoleon for a long time."

"Macron tweeted in Turkish and said that he is ready for dialogue. The name of the man who made a French President tweet in Turkish is Recep Tayyip Erdoğan," Turan said.

Macron on Sept. 19 shared a tweet in Turkish that called for dialogue amid the increasing tensions in the eastern Mediterranean.

"In Ajaccio, we sent a clear message to Turkey: Let's relaunch a responsible dialogue, in good faith, without naivety. This call is now also that of the European Parliament. It seems to have been heard. Let's move on," Macron said in the tweet.

Erdoğan also responded to Macron's gesture, saying that Turkey intends to listen to all sincere calls and make room for diplomacy. 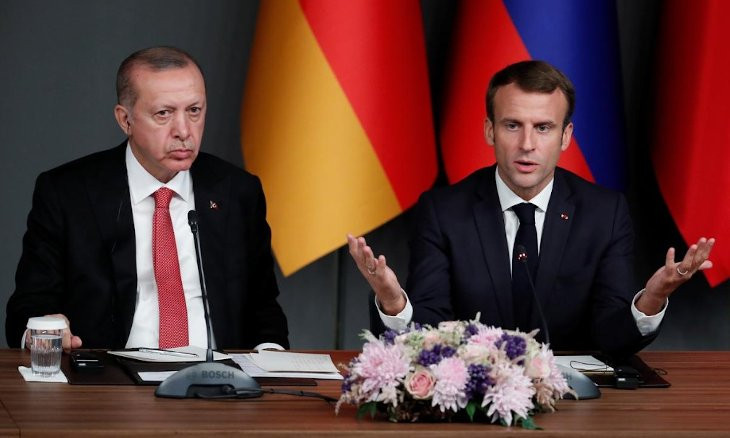 "We ignore the persistent provocations and carry out all the processes in a mature manner. We intend to make room for democracy as much as possible and find a solution to problems that everyone wins through dialogue via listening to all sincere calls," Erdoğan said in a tweet.

"We'll continue to defend our country with this vision," he added.

Presidential spokesperson İbrahim Kalın was another official to respond to Macron's Turkish tweet, saying that it's a "sympathetic move."

"It's nice for Mr. Macron to release a Turkish message. It's a sympathetic move. However, the meaning is more important than wording. We need to look at what's intended and in which political strategic framework it falls in," Kalın said on Sept. 20.

Kalın also said that European politicians need to see that blackmails, threats and sanctions against Turkey will never bear results.

"A friendly advice to my schoolmate Macron: Move on, don't wait, continue," Onaner said, referring to the École Nationale d'Administration that the two graduated from.