Turkey has deemed a deal reached between Azerbaijan and Armenia a "great victory" for Baku.

Turkish Foreign Minister Mevlüt Çavuşoğlu said on Nov. 10 that Ankara will continue to stand with Azerbaijan.

"This deal is a great success and victory for Azerbaijan. Lands, under occupation for 30 years are being liberated,” Çavuşoğlu said at a joint news conference with his Kyrgyz counterpart Ruslan Kazakbaev in the capital Ankara.

He said Turkey is in contact with all parties on monitoring the deal to end the Nagorno-Karabakh dispute.

“Finally, [Armenian Prime Minister Nikol] Pashinyan and the Armenian army had to give up,” Çavuşoğlu said, adding that Armenia "has paid a heavy price for its unrelenting pursuit of war and conflict."

Earlier in the day, Russian President Vladimir Putin announced that Azerbaijan and Armenia have signed an agreement to create the necessary conditions for a long-term and comprehensive solution to the longstanding conflict over Nagorno-Karabakh.

The announcement sparked celebrations in many Azerbaijani cities, with thousands carrying both Azerbaijani and Turkish flags, singing national anthems and dancing in the streets. 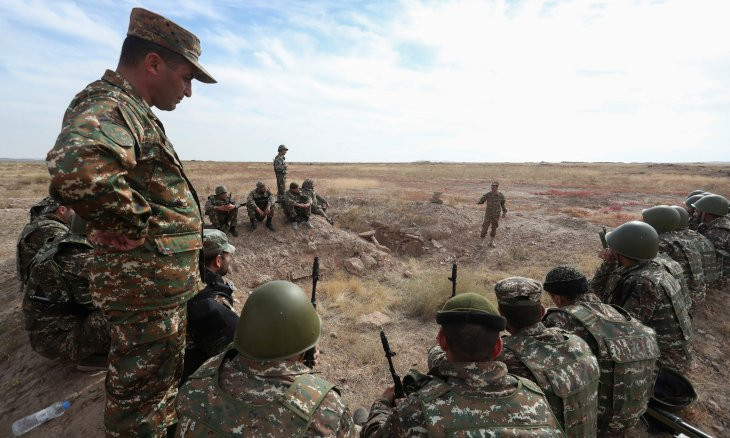 Erdoğan tells Putin that Armenia must negotiate over Nagorno-Karabakh

“We are pleased with the support that the Turkic Council has extended to Azerbaijan,” Çavuşoğlu said, stressing the need for "all brotherly countries to show their solidarity."

Relations between the two former Soviet republics over Nagorno-Karabakh have remained tense since 1991, with fresh clashes erupting on Sept. 27.

Another Turkish official to hail the deal was Parliament Speaker Mustafa Şentop.

"Azerbaijan's legitimate right and victory have finally been acknowledged by the enemy. Armenia has had to retreat and surrender from Karabakh which it had occupied and where it had committed massacres," he said.

"Karabakh is now free. Karabakh is Azerbaijan. Turkey will remain by Azerbaijan's side both in the field and on the table," Kalın said. Russia: Reports of mercenaries fighting in Nagorno-Karabakh are 'a serious concern'

"The great fight ongoing for years has been crowned with victory, Azerbaijan has won a clear victory on the field," said ruling Justice and Development Party (AKP) spokesperson Ömer Çelik.

"Turkey, with our president's determined stance, has been by Azerbaijan's side since the beginning of the operation. It is seen that Turkey stands with Azerbaijan on the table regarding the truce agreement, as did on the field," he added.

Defense Minister Hulusi Akar said Turkey will continue to stand by Azerbaijan "during the process of return of all Azerbaijani lands occupied by Armenia, maintaining peace in the region, and meeting the conditions of the cease-fire."

"We welcome the victory of our Azerbaijani brothers and sisters who have fought for a right struggle to reclaim their own lands that have been occupied for nearly 30 years, and to end Armenia's barbarous attacks," Akar said on Twitter.

Also on Nov. 10, Putin said that he hopes for a lasting peace for both Azerbaijani and Armenian people.

“I hope these last steps we have taken will ensure long-term peace for the peoples of Azerbaijan and Armenia,” Putin said, speaking at a virtual summit of the Shanghai Cooperation Organization.

Describing the events in Nagorno-Karabakh as "tragedy", Putin said: "I would like to express with great pleasure that we have reached agreements to stop the bloodshed.”

Russian peacekeeping troops deployed to Nagorno-Karabakh on Nov. 10 as part of the deal.

Under the deal, Azerbaijan will keep territorial gains made in the fighting, including the enclave's second city of Shusha, which Armenians call Shushi. Ethnic Armenian forces must give up control of a slew of other territories between now and Dec. 1.

Armenia's Defense Ministry said military action had halted and calm had been restored in the breakaway territory, which is internationally recognized as part of Azerbaijan but populated and, until recently, fully controlled by ethnic Armenians.

Unrest broke out in Yerevan, the capital of Armenia, where crowds stormed and ransacked government buildings overnight, labeling the deal a betrayal. Some demanded the resignation of Prime Minister Nikol Pashinyan.

Nagorno-Karabakh leader Arayik Harutyunyan said there had been no option but to conclude a peace deal because of the risk of losing the whole enclave to Azerbaijan. Pashinyan said he had concluded the peace deal under pressure from his own army.

"The decision was made based on a deep analysis of the combat situation and in conjunction with the best experts," Pashinyan said.

Appealing to Armenians to see the deal as the start of a new era of national unity, he said: "This is not a victory, but there is no defeat until you consider yourself defeated."

Russia, which has a defense pact with Armenia and a military base there, is likely to hail the deal as a sign it is still the main arbiter in the energy-producing South Caucasus, which it sees as its own backyard, despite Turkish attempts to muscle in.

Russian peacekeepers will remain for at least five years, expanding Moscow's military footprint in the region. Putin said they would be deployed along the frontline in Nagorno-Karabakh and in a corridor between the region and Armenia.

The last of 10 military planes carrying Russian peacekeepers took off on Tuesday, the Russian Defense Ministry said. Almost 2,000 servicemen, 90 armored personnel carriers, and 380 vehicles and pieces of other hardware are being deployed.

Kremlin spokesman Dmitry Peskov said there had been no agreement on deploying any Turkish peacekeepers in Nagorno-Karabakh, but the Turkish military will help staff a joint monitoring center with Russian forces.

Displaced people to return to Nagorno-Karabakh

Under the agreement, Azerbaijan will gain a road link to an Azeri exclave on the Iranian-Turkish border, something that will give Turkey a land bridge to the rump Azerbaijan.

Putin said displaced people would be able to return to Nagorno-Karabakh and prisoners of war and bodies of those killed would be exchanged. All economic and transport links in the area would be reopened with the help of Russian border guards.

The agreement created the conditions for a long-term settlement "on a fair basis and in the interests of the Armenian and Azeri peoples," Putin said.

In Armenia, 17 political parties demanded Pashinyan resign and a petition was started demanding the agreement be annulled.