The Transportation and Infrastructure Ministry has released its preliminary report on a Pegasus Airlines plane that skidded off the runway and killed three passengers at Istanbul’s Sabiha Gökçen Airport on Feb. 5.

The report submitted to the Istanbul prosecutors said that the pilots did not use “manual braking” for six seconds after the mainwheel touchdown on the runway, as a result of which the aircraft did not slow down due to the accelerating effect of the rear wind.

One the pilots noticed that the plane was not decelerating, they applied manual breaking, and continued to do so until the end of the runway, the report said.

The plane eventually overshot the runway and then fell down a 30-meter ditch. One engine caught fire and the fuselage broke in three pieces.

Pilots were 'stressed' due to lightening that struck the plane

The report also said the voice recordings between the air traffic control tower and the pilots had showed that the pilots wanted to make a landing “as soon as possible” due to a lightening strike that hit the aircraft six minutes prior to its touchdown. This put the pilots in “stress” as they worried that the lightening might have damaged the aircraft, according to the report.

“According to the voice recordings, because of the the lightening that struck the plane about six minutes prior to its landing, the pilots started to stress out due to a possibility of a problem and they wanted to make a landing as soon as possible,” the report said.

On Feb. 5, strong winds and heavy rains had been reported throughout the day in Istanbul. Two flights preceding PC2193 had to engage a go-around ‒ something that had been communicated by the air traffic controller to the two pilots.

However, the flight crew decided to proceed with the landing.

Following the accident, the Istanbul prosecutors launched an investigation into the two pilots of the crashed plane for possible negligence.

On Feb. 24, authorities arrested the captain following his discharge from a hospital where he had been treated. The pilot, identified only as M.A., faces charges of “involuntary manslaughter and causing injury.” 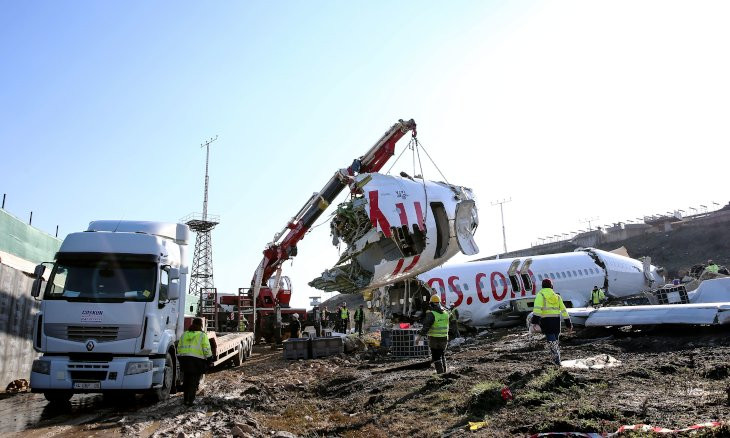