The number of Turkish deputies who have so far tested positive for COVID-19 has increased to four, as a statement released on June 30 said that Muhammet Emin Akbaşoğlu, the group deputy chairman of the ruling Justice and Development Party (AKP), was also infected with the virus.

Reports suggested that Akbaşoğlu's state of health is good.

Main opposition Republican People's Party (CHP) group deputy chairman Özgür Özel on June 30 wished Akbaşoğlu a speed recovery on behalf of the party during a speech at the parliament.

"We have received a negative news about Akbaşoğlu's state of health, and we are very saddened. We are following the issue closely and wishing him a quick recovery," Özel said.

The latest infection came after the pro-Kurdish Peoples' Democratic Party (HDP) announced last week that three of its deputies tested positive for the virus.

A statement issued by HDP Group Deputy Co-chairs Meral Danış Beştaş and Saruhan Oluç on June 27 said: "With the tests conducted so far, it has been determined that three of our deputies have been infected [with the virus]. Our deputies are under doctor examination and their states of health are good."

The party said that a member of the cleaning staff on the party's group hall's floor had been diagnosed with COVID-19.

"We decided to get cafeteria and floor staff, counselors and deputies tested. The first round of tests unfortunately revealed one lawmaker to be infected."

As a precaution, all HDP deputies and officials who participated in the general assembly were asked to get tested for COVID-19 and to self-isolate at home.

Following the diagnosis, parliament formed a 'Coronavirus Crisis Management Commission', issued a visitors ban and closed down all cafeterias on the parliament campus.

Parliament management also encouraged anyone present on campus to adhere to social distancing, wear masks and use hand sanitizer.

Teams of preventative guidelines enforcement were formed by the Press, Publication and Human Relations Directorate, the Back-up Services Directorate and campus security. 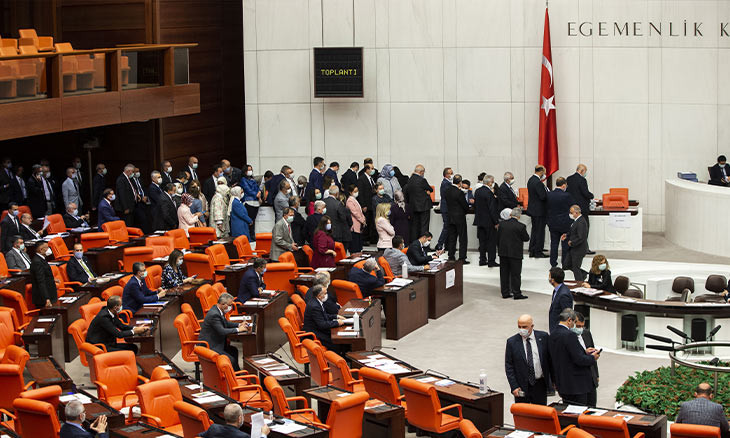