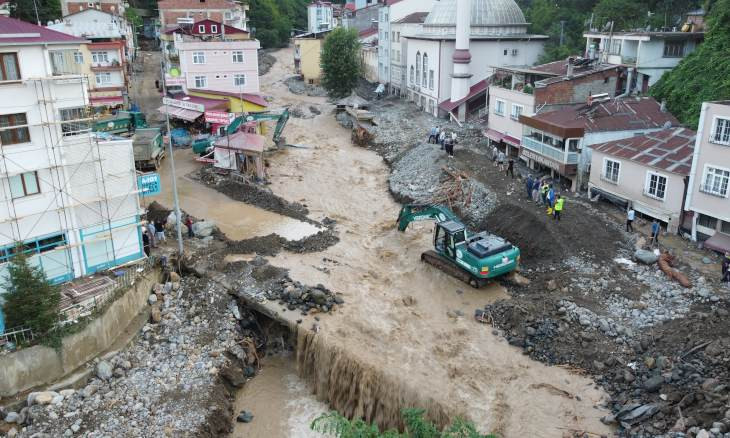 A bridge in the Black Sea province of Giresun that should have previously been demolished caused a dam effect during disastrous flooding in the area that resulted in the deaths of nine people, according to a research panel from the main opposition Republican People's Party (CHP).

The flood was particularly devastating in the district of Dereli, where 221 of the area's 241 local businesses were destroyed, while a number of public buildings were also damaged.

The main cause of the flooding was an old bridge near the entrance of Dereli that was supposed to be demolished after the construction of a newer bridge in the same location, but was left standing. The flooding damaged a part of the bridge, resulting in a dam effect that sent the pooled water toward the city center, damaging everything in its path.

The collapse of a culvert in Giresun between the districts of Tirebolu and Doğankent resulted in the deaths of five soldiers. The culvert stood 25-30 meters above the stream but collapsed after the floodwater rose past 30 meters. Quarry operators had taken gravel and sand in the lower part of the culvert for years, resulting in the emptying of the culvert.

In July of last year, CHP provincial council member Ömer Cebeci sent a petition to the chairman of the council regarding the culvert situation, requesting an investigation of the structure and for the culvert to be reinforced. However, ruling Justice and Development Party (AKP) chairman Ahmet Şahin did not process the petition.