OdaTV's editor-in-chief Barış Pehlivan has pressed charges against a prison guard who he said battered him upon his arrival at the Silivri Prison on March 6.

The criminal complaint, which was filed through Pehlivan's lawyers on March 9, asked the authorities to analyze the security camera footage that recorded the incident and demanded that it be put in the file.

"As our client was waiting for the registry procedure [for entering the prison] to be completed, the suspect approached our client from behind and hit his back twice in a harsh way...Our client does not know the suspect's name but remembers his face in a very clear way," read the criminal complaint.

The incident was initially made public by lawyer Hüseyin Ersöz on March 7. "Pehlivan told the lawyers who visited him about the mistreatment. We will file a criminal complaint on the issue," Ersöz said, adding that the incident took place at the prison's entrance.

Following Ersöz's remarks, Bakırköy Chief Public Prosecutor's Office released a statement denying that the journalist was subjected to mistreatment. "The incident was looked into by Silivri Prison Prosecutor's Office. Following the examinations and reviews of security footage, it was concluded that Pehlivan was not battered or subjected to mistreatment, whether it be verbal or physical," the prosecutor's office said on March 7. 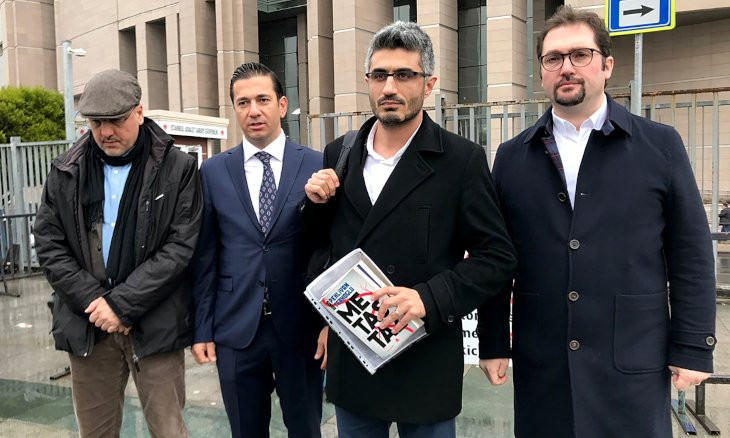 Ağırel was detained on March 6, but was freed a day later on condition of judicial control. Upon the objection of a prosecutor's office, an arrest warrant was issued for the columnist on March 8.

Keser and Çelik were also called to testify on March 6, but were referred to court with the prosecutor seeking their arrest. They were freed on condition of judicial control, but were detained again on March 8.

All three were arrested later on.

The arrests and detentions were condemned by 40 bar associations in a statement.

"Our Constitution says that the press is free and can't be censored. Journalism is not a crime," the statement read.