A suspect has been arrested on charges of issuing a death threat against the Hrant Dink Foundation, state-run Anadolu Agency reported on May 31.

The suspect known only by initials H.A. was detained at his residence in the Central Anatolian province of Konya on May 30. He was later brought to Istanbul as part of an investigation launched by the Istanbul Chief Public Prosecutor's Office.

Interior Minister Süleyman Soylu tweeted on May 30 that H.A. and another assailant who last week ripped off a cross outside Surp Krikor Lusavoriç Armenian Church in Istanbul’s Kuzguncuk neighborhood were detained.

Following Soylu’s comments, the General Directorate of Security (EGM) released a statement saying that the suspect believed to have issued the death threat against the Hrant Dink Foundation was caught in Konya. The suspect H.A. was tracked by the e-mail address to his residence address, the EGM said.

The Hrant Dink Foundation said in a press release on May 29 that it received a written death threat via email and notified the Istanbul governors’s office and the Şişli police department regarding the issue. 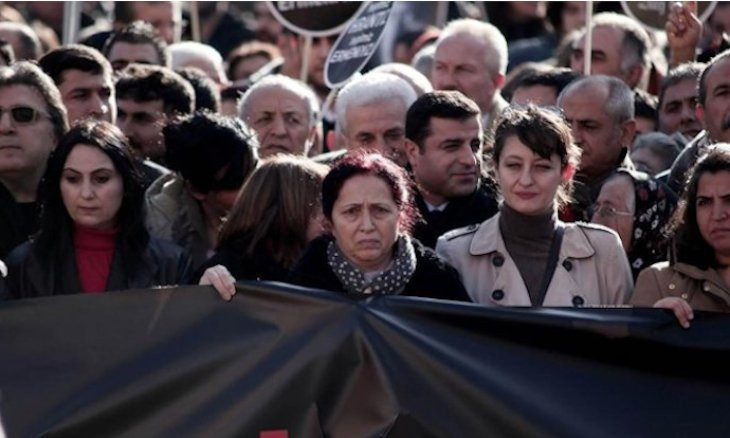 “The email included the phrase ‘We may turn up one night, when you least expect it’, a slogan used boastfully in certain circles, and the very same slogan we were well used to hearing before Hrant Dink was so publicly assassinated, and with the knowledge of official bodies, on 19 January 2007. The threat accuses the Hrant Dink Foundation of telling ‘tales of fraternity’, demands us to leave the country and threatens Rakel Dink [Hrant Dink’s wife] and the foundation’s lawyer with death,” the foundation said in a statement.

“We may turn up one night, when you least expect it” was a phrase President Recep Tayyip Erdoğan used before the Turkish military launched its cross-border “Operation Peace Spring” into northeastern Syria in October 2019. The same quote was used by Erdoğan before Turkey’s two others Syria operations named “Olive Branch” and “Euphrates Shield.”

Dink was shot dead on Jan. 19, 2007 in front of the apartment where Turkish-Armenian weekly newspaper Agos’s main office was located on the Halaskargazi Street of the Şişli district in Istanbul.

Relatives and followers of the case have long claimed government officials, police, military personnel and members of the National Intelligence Agency (MİT) played a role in Dink’s murder by neglecting their duty to protect the journalist.

Dink was outspoken on the Armenian genocide and prosecuted a number of times under the Turkish penal code for “denigrating Turkey” and “insulting Turkish identity.”

His murder quickly came to symbolize the rising wave of nationalism in Turkey.

“The recent rise in unconstrained hate speech and racist, discriminatory discourse only serves to trigger, encourage and instigate such horrendous attitudes. It is the duty and responsibility of all actors engaged in politics in Turkey to work towards ensuring equality, freedom and justice for all citizens. We therefore believe that it is our duty to share this statement with the public to remind the authorities of their responsibilities and to emphasize the serious nature of the climate that has been created,” the Hrank Dink Foundation said in its statement.

The death threat comes in the aftermath of two recent attacks on Armenian churches in Istanbul.

An assailant on May 22 ripped off a cross outside Surp Krikor Lusavoriç Armenian Church in Üsküdar’s Kuzguncuk neigborhood, whereas another attempted to burn the entrance door of Dzınunt Surp Asdvadzadzni Armenian Orthodox Church in Bakırköy on May 8.