A video recently caused quite a stir in social media. Its headline was “A lemon conspiracy for Imamoğlu.” A short clip shows what was going on “behind the scenes” of a media interview a local reporter was doing with a farmer who wasn’t able to export lemons due to the effect of the pandemic on trade. While the reporter was filming and asking the farmer questions, there was another camera filming both of them. We later learned that the third cameraperson was from the same team, and that the farmer was not actually a farmer, but a manager at a furniture store and a former local leader with the ruling Justice and Development Party (AKP).

In this video, the reporter corrected the “farmer,” telling him what to say word by word. He was giving “the farmer” — i.e., the actor — his cues. If this story had been posted as it was intended, as a news story, then the mayor of Istanbul, from the main opposition Republican People’s Party (CHP), Ekrem İmamoğlu, would have been accused of partisanship and favoritism, as the video attempted to create a narrative that the opposition party was buying only from farmers and wholesalers aligned with their own party.

This was a great opportunity for AKP trolls, who are looking for fraud by Mayor Ekrem İmamoğlu. But the opportunity did not pan out. When these “behind the scenes” shots were posted on social media, it was obvious that the interview was scripted.

What interests me here is not the trolling activity of spreading fabricated news, which we have somehow gotten used to. It is the topic of the story, “the lemon,” and what it reminds me of. The lemon had a leading role of the most successful campaign message of maybe all of Turkey’s election campaign history. The Social Democratic Populist Party (SHP), led by Erdal İnönü, used the slogan, “Do you have the strength to be squeezed like a lemon for another five years?” in the 1987 general elections. The slogan was accompanied by an image of a squeezed lemon. It was immediately very effective for voters fed up with corruption, favoritism and austerity policies.

The power of the campaign was echoed in the press of that time as “they squeezed the lemon for Özal’s enjoyment.” Turgut Özal was the neoliberal Prime Minister then, leading the ruling party ANAP. As a matter of fact, SHP’s share of the vote went up from 12 percent to 24 percent while the ANAP vote dropped to 36 percent in 1987 elections.

In the following local elections in 1989, ANAP was in power. SHP once again said “No to being squeezed like a lemon” and increased its vote share to 28 percent.

SHP won the local administrations in 39 provinces then, including Ankara, Istanbul and İzmir. In these elections, Turgut Özal would ask the voters whether they would like to have a mayor who will have their hands tied — just like President Erdoğan said before the re-do June 23, 2019 local elections with CHP candidate Ekrem İmamoğlu, claiming that “Even if [Imamoğlu] is elected, he will be a mayor like an ornament on a store window.”

Today, despite all the efforts to tie their hands, we are witnessing that the CHP-led municipalities that won their elections are now showing Ankara and Istanbul residents who were ruled by the AKP mentality for 25 years that a different kind of local government is possible. Now, daily life is paralyzed, the economy is at a standstill, many workplaces are closed and hundreds of thousands of people are out of work. Many more do not know when they will lose their jobs. Ekrem İmamoğlu, the mayor of a megacity, is trying to practice solidarity despite all the obstacles the government sets in front of him.

The CHP municipalities are banned from collecting cash for aid efforts, their bank accounts for campaigns are closed, their free distribution of bread has been stopped, and when they start – like in Adana — to build field hospitals, they are also stopped. The CHP municipalities are putting in extraordinary effort to find a way to serve residents who are in need. Their campaigns are conducted in such a way that the grassroots receive equal amounts. They are working to ensure that the most needy receive aid from those in better positions; in other words, they have formed a solidarity relationship among their voters.

As of April 26, Ankara Mayor Mansur Yavaş launched a campaign called “One Iftar dinner from me,” which has gained 400,000 supporters. The İzmir municipality is distributing 10,000 meals daily through their “We are here” campaign.

This “cooperation” model was based on dependency on the top, and instruction was essential. It is far from voluntarism. The recent “We are all we need” aid campaign based on President Erdoğan’s announcement is also based on this model. The president first donated his salary to the campaign, then deputies did, followed by administrators and politicians. Even civil servants, teachers, and private sector workers, many of whom have had hard times making ends meet, were forced to donate and send their bank receipts to their managers — so much so that their managers did not see any harm in documenting the instructions in official correspondence. Even the Interior Ministry had to pass off the claim that the police department staff was forced to donate as “activities the organization conducted amongst themselves.”

On the other hand, CHP municipalities, with Ankara, Istanbul and Izmir leading, were able to demonstrate that a local governance model was possible in which organizations did not just grant others something, but mediated, and did not act condescendingly, but instead administered a service. They were able to do this in the span of less than a year, while trying to fight off a huge disaster at the same time.

The CHP policy and its leader Kemal Kılıçdaroğlu offer a new sense of hope. They are calling for the construction of a new civilization as opposed to the former model of violating the most basic rights. They are saying this is possible with a social welfare state mentality that prioritizes cooperation, solidarity and accountability.

Today, CHP leader Kılıçdaroğlu is renewing the hope of “fortune for the unfortunate,” just as in 1987, when Prime Minister Turgut Özal represented neoliberal policies while Erdal İnönü promised the oppressed people a breath of relief and to not be “squeezed like a lemon.”

This time, however, the lemon has emerged not only as a signifier of neoliberal politics that exploit the people, but also a symbol of the desperation of power and the network of interest it has created around itself. 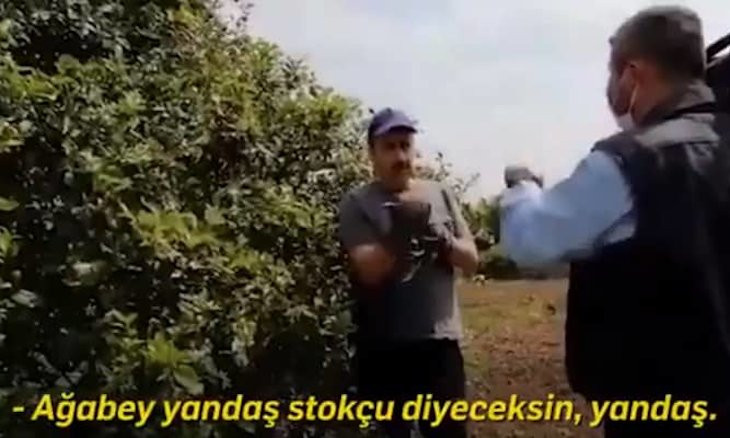