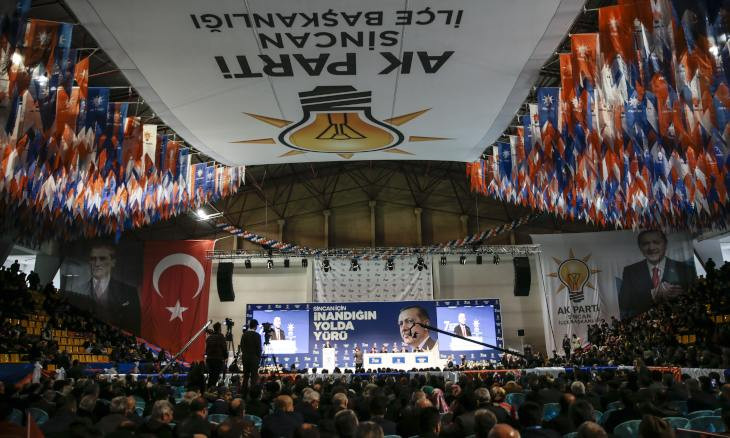 Turkish gov't downplays any possibility of a coup attempt

Former Land Forces Commander Gen. Aytaç Yalman died at the age of 80 in a hospital that he was receiving treatment late on March 16.

Yalman, who retired from the Turkish Armed Forces (TSK) in 2004, held a number of critical posts in the army, including leading a military delegation responsible for carrying out Turkey-Syria security relations within the scope of the 1998 Adana Agreement, which was signed by Turkey’s then-President Süleyman Demirel and Syria’s then-President Hafez al-Assad.

In the following years, Yalman's name made headlines frequently with the Balyoz (Sledgehammer) coup plot case, which was later revealed to be a conspiracy plotted by followers of the U.S.-based Islamic preacher Fethullah Gülen and which led to the dismissal of soldiers who were not Gülenists.

The Balyoz case started in 2010 after daily Taraf, which was shut down after the July 15, 2016 failed coup attempt, revealed documents titled “Balyoz Operation Plan," dating back to 2003 when then-Chief of General Staff Gen. Hilmi Özkök was in office.

As part of the Balyoz case, military commanders were accused of trying to destabilize the ruling Justice and Development Party (AKP) in the wake of the 2002 elections with plans to bomb mosques and trigger a conflict with Greece to pave the way for a military takeover.

Many of the judges and prosecutors that prosecuted the Balyoz case have since been probed due to charges of links to the Gülen movement, which is officially called the Fethullahist Terrorist Organization (FETÖ).

Yalman, alongside Özkök and other top army generals, testified in the case.

The case was marked by accusations within the army, with Özkök accusing Yalman of formulating the idea of issuing a memorandum against the AKP to warn it against injecting religion into politics - a claim that was rejected by Yalman.

Yalman said he had no knowledge of the Balyoz coup plot at the time it is alleged to have been planned.

“I do not have any information or documents. I learned about this subject after it was reported by the media,” he said.

One of the most controversial issues that was the subject of accusations at the time was a seminar held between March 5 and 7, 2003, which was presented as the gathering in which Çetin Doğan, head of the 1st Army, organized and rehearsed the Balyoz coup plan.

Yalman said he knew nothing about the context in which the seminar was presented as he could not attend. He also said that former army general İlker Başbuğ and Doğan – both of whom were working under his rank at the time – had not informed him of it.

“That is to say, the seminar was held in violation of my orders. I learned about it later,” Yalman said.

“The seminar was nothing but a show of heroism that took place against an order, violating social rules and going beyond its purpose and limit," he also said.

"Yalman had sent a scenario to the seminar. He did not send any message saying not to play this scenario,” Doğan said.

"If he is saying, ‘I don’t know about it,’ then why did he occupy the seat of the Command of the Land Forces? There is no right to rebel at the chain of command in the TSK. There is no lack of discipline, it is no guild of janissaries," he added.

Army was not purged of Gülenists because movement was not illegal, says ex-army chief

In October 2012, while answering questions from members of Parliament’s Coups and Military Memorandums Inquiry Commission, Özkök said he had not heard of a coup preparation plan known as Balyoz, but added he had, however, heard that “expressions beyond the limits” were used during the seminar and he had assigned Yalman to examine the issue. Yalman did not provide him with feedback, Özkök said at the time.

'The army is not made of one person'

One of the most discussed statements of Yalman was about who prevented the Balyoz coup plan from being carried out. Questioning the portrayal of Özkök as being the sole actor in preventing the coup plot, Yalman said, "The Turkish army is not made of one person."

“It is not only the chief of general staff who makes the army. The Turkish army means the Turkish land forces command. How many tanks or rifles did Hilmi Pasha have [at the time]?” Yalman said.