Six members of the Union of Turkish Bar Associations have resigned to protest its head's stance against their colleagues.

Lawyers Ali Çetin Aygün, Selçuk Ertan, Sadık Onur Gelbal, Necati Erdem, Hasan Erdem and Ayça Ulaş released a statement on their resignation from the union's labor commission, slamming Metin Feyzioğlu for not supporting the lawyers' protests against a recent bill that was backed in parliament.

Feyzioğlu became under fire for not backing the bar heads and lawyers during their protests against the bill that, according to critics, aims to silence some of the few institutions still speaking out against the government's record on rule of law and human rights.

The law aims to decentralize the bar associations by permitting the establishment of alternative associations in Istanbul, Ankara, and İzmir, which represent nearly half of all lawyers in the country.

It also seeks to change the election system of the executive board of the Turkey Bar Associations in a way to break the power of three biggest associations so that provincial organizations would have more of a say in the lawyers’ agenda. 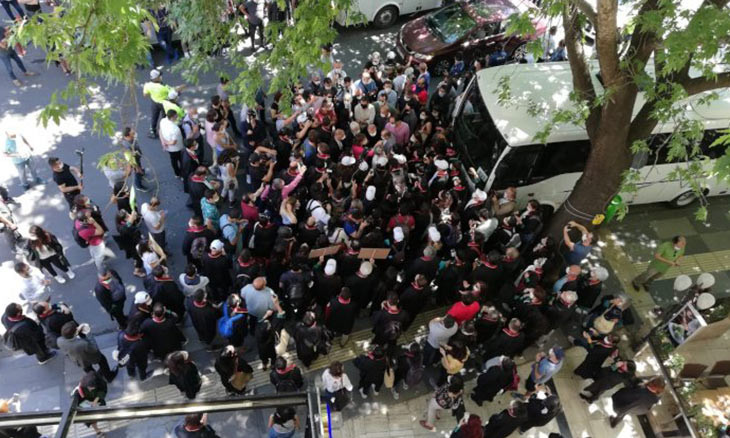 Each bar association in the provinces will be represented by three delegates and a president in the General Assembly of Union of Turkish Bar Associations.

Opponents say it will strengthen small provincial bars at the expense of the large associations in the main cities. The larger associations currently predominate and are frequently critical of the government.

Before its approval in parliament, lawyers and bar heads carried out massive protests against the bill, with police dispersing them frequently.

They also wanted to participate in the discussions of the bill, but were prevented.

Feyzioğlu 'watched the process in silence'

Feyzioğlu's stance was against the protests and showed no support to the lawyers.

"It's clear that we can't continue our duties with the current union head when taking Feyzioğlu's passivity and stance against our colleagues in the recent process into account," the lawyers who resigned said in a statement.

"It's now impossible for us to walk alongside an understanding that the union is an organization of all lawyers and bars and that watched the process in silence," they added.

Saying that those who joined Feyzioğlu in his silence and who held their individual interests above the profession "won't be able to get rid of their historical responsibilities," the lawyers noted that they will continue to be on the side of those resisting.