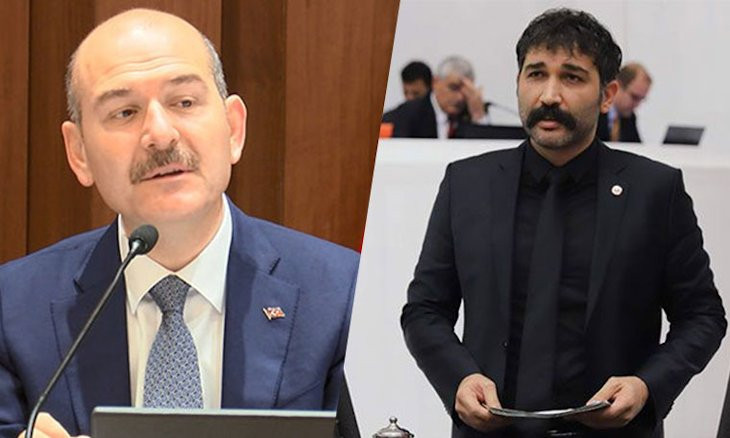 After he was discharged from Haydarpaşa Numune Hospital, Atay told reporters that he had not been seriously injured and would hold a press meeting regarding the issue on Sept. 1.

Atay also filed a criminal complaint at the prosecutor's office regarding the attack. "The perpetrator of this incident is Süleyman Soylu," Atay said in his testimony, emphasizing that the minister had "made him a target" the day before on Twitter.

Atay also said in his testimony that a group of three or four people had thrown punches at him from behind, causing him to fall on the ground. "They started hitting at my body at various places, especially my head. After my friend called the police, they started running away. As these people were battering me, they swore at me and called me 'a traitor,'" Atay was quoted as saying by daily Cumhuriyet.

TİP early on Aug. 31 announced that Atay was in good health. “Our deputy chair Barış Atay who was earlier in the day targeted by Süleyman Soylu, was attacked by a group of 'unidentified' people this night. Our comrade Barış is in good health. We thank for wishes of solidarity,” TİP wrote on Twitter.

The attack came after Soylu said on Aug. 30 that Atay would be “a perfect rapist” following the deputy's criticism of the minister over the release of specialized sergeant Musa Orhan, who faces charges of raping a Kurdish woman.

The fact that Orhan was released prompted outrage among the public last week, with Atay saying that Soylu protected a rapist.

“We’ll try for it to be never forgotten,” Atay wrote on Twitter on Aug. 30.

In response, Soylu said that he doesn’t protect rapists, but that Atay is a rapist.

He also addressed Atay as a “leftover” of the Kurdistan Workers’ Party (PKK) and the Revolutionary People’s Liberation Party/Front (DHKP-C).

“I can’t be a protector of rapists, but you would be a perfect rapist,” Soylu wrote on Twitter on Aug. 30.

Following the assault against Atay, several people, including opposition politicians, slammed Soylu, with the hashtag #BarisAtayYalnızDeğildir (which translates as 'Barış Atay is not alone') going viral on Twitter.

"The identity of the attackers can be unknown but those who made him [Atay] a target, who gave instructions are very clear. Those who think that they can browbeat people's deputies in such a way will of course get their answer," the Peoples' Democratic Party (HDP) wrote on Twitter.

"The incapable slanderer who is sitting at the office of the Interior Ministry has instigated the attackers. The reason of the language that allows these attacks is the fear of losing rulership. We will not surrender to your language and will not bow even a centimetre in front of you," main opposition Republican People's Party (CHP) group deputy chair Özgür Özel wrote on Twitter, expressing his get-well wishes for Atay.

HDP deputy Fatma Kurtalan similarly criticized Soylu over his remarks, saying: "The Interior Minister showed him as a target and deputy Barış Atay was attacked. We will continue to say democracy, peace and justice, and stand against rape and masculine culture."

"Is this mafia or the state? Look at this situation! The Interior Minister shows him as a target and the deputy is attacked," said HDP MP Ömer Faruk Gergerlioğlu.