The right-wing opposition Good (İYİ) Party is in disarray after one of its deputies accused the party's Istanbul chair of being a supporter of U.S.-based Islamic preacher Fethullah Gülen.

During a live TV program on Oct. 19, Ümit Özdağ claimed that İYİ Party Istanbul chair Buğra Kavuncu is a Gülenist and that he conveyed his concerns to party leader Meral Akşener.

Özdağ also said that Kavuncu was the head of an organization with known links to the Gülen movement, whose official name is the Fethullahist Terrorist Organization (FETÖ), and that the organization was shut down following the July 15, 2016 failed coup attempt, which is widely believed to have been orchestrated by Gülenists.

"When the party was being founded, I told Akşener, 'There is information that this individual is linked to FETÖ.' He wasn't included as a founding member afterwards," Özdağ said.

"She told me that there are no records of such links in the state," Özdağ said. 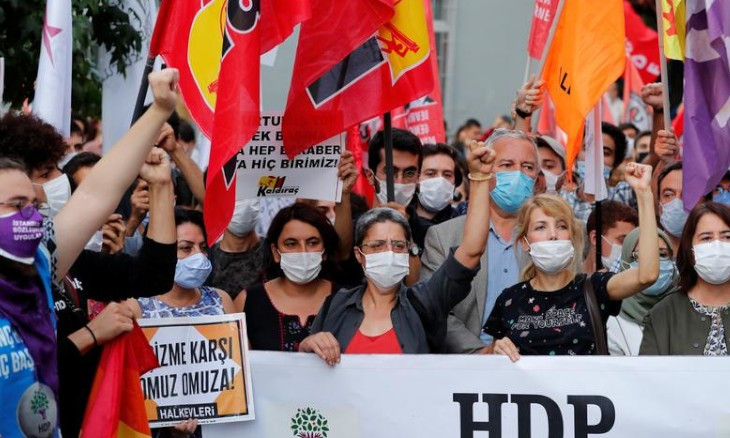 Turkish gov't to extend its crackdown on HDP to all opposition parties, says İYİ Party lawmaker

Following Özdağ's accusations, Kavuncu called the TV program and said that he will file a complaint against the deputy.

"I listened to his words in great sadness and anger," Kavuncu said.

The deputy's remarks were also met with fury within the party, with Özdağ's advisor announcing his resignation on Twitter.

"I will continue to work for the İYİ Party under the leadership of Meral Akşener," Hüseyin Evren Kavas said.

The party's district heads in Istanbul released a statement shortly after Özdağ's remarks and demanded his expulsion from the party.

A day later, Akşener said that Kavuncu filed a complaint and Özdağ has the opportunity now to prove his claims.

"We'll see what will happen," Akşener told reporters on Oct. 20 when asked to comment on the allegations, as she also stressed the existence of the freedom of expression within the party.

She also said that what matters is not the brawl within the party, but what ruling Justice and Development Party (AKP) Group Deputy Chair Bülent Turan said of the incident.

Turan on Oct. 19 tweeted his remarks from a year ago, saying that they expected the dissolution of the İYİ Party.

"İYİ Party was founded for an operation and we said that their dissolution would begin after the elections," Turan says in the video.

Akşener, in return, said that they already expected "an attack" on the party since "our votes are increasing."

Claims of rapprochement between İYİ Party, HDP are lies: Akşener

Separately, Özdağ on Oct. 19 claimed that the İYİ Party and the Peoples' Democratic Party (HDP) cooperated during the March 31, 2019 local elections in the eastern province of Kars, which resulted in the HDP's victory.

Özdağ said that he tried to convince Akşener to cooperate with far right Nationalist Movement Party (MHP) to prevent the HDP's victory, but couldn't manage to do so.

When asked to comment on said allegations, Akşener said, "This is a massive lie."