The European Court of Human Rights (ECHR) on Nov. 24 ruled that Turkey violated the right to freedom and security and freedom of expression of journalist Ahmet Şık, who is now an independent lawmaker.

Şık was placed in pre-trial detention on Dec. 30, 2016 over his articles published in the Cumhuriyet newspaper as well as his social media posts critical of the government. The prosecutors accused him of assisting terror organizations without being a member of them. He was released on March 9, 2018, after spending 14 months in pre-trial detention.

The ECHR said that the orders for Şık's initial and continued detention had been based on mere suspicion and Turkey had violated the journalist's rights.

Şık “could not be reasonably suspected, at the time of his placement in detention, of having committed the offenses of disseminating propaganda in favor of terrorist organizations or assisting those organizations,” the ECHR said in its decision.

“In other words, the facts of the case did not support the conclusion that a reasonable suspicion had existed against him.”

“The applicant’s detention was not based on reasonable suspicion that he had committed an offense. It further noted that according to Article 100 of the Turkish Code of Criminal Procedure, a person could be placed in pre-trial detention only where there was factual evidence giving rise to strong suspicion that he or she had committed an offense,” it said.

The ECHR also ordered Turkey to pay Şık 16,000 euros in non-pecuniary compensation over violations of the 5th and 10th articles of the European Convention on Human Rights.

The court however refused to state that the trial against Şık was politically motivated.

Şık is one of the several Cumhuriyet staff who was jailed on terrorism charges. On Oct. 31, 2016, ten of Cumhuriyet’s staff were arrested and charged with various terrorism offenses. Seven out of the ten applicants were released in July 2017. The remaining three journalists – Kadri Gürsel, Murat Sabuncu and Akın Atalay – were released by April 2018. 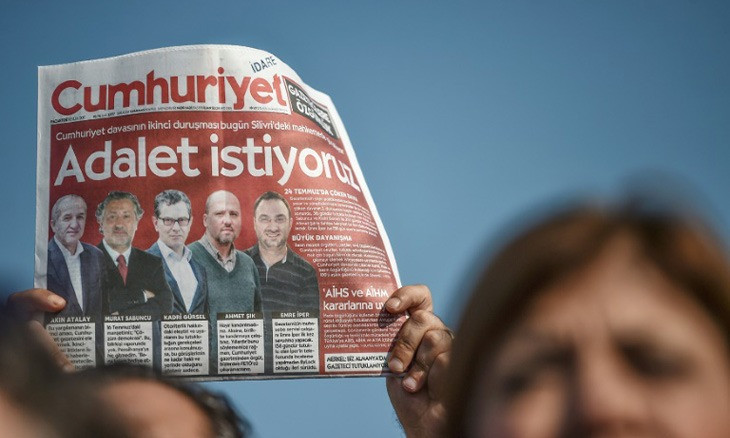 The ECHR said in a ruling on Nov. 24 that the journalists' were rights were violated as their detentions and arrests weren't based on reasonable causes.