Turkey's Constitutional Court on June 30 ruled that a local court "violated the law" by fining a group of members of the teachers' union Eğitim-Sen who protested the layoff of public workers following the coup attempt of July 15, 2016, ANKA news agency reported on July 27.

The teachers were put on trial for attempting to hand out pamphlets reading "We are taking claiming our jobs and our futures, we will repel this attack" in Istanbul on Oct. 7, 2016 to protest the layoff of thousands of public workers following the failed coup attempt.

Eleven teachers were detained and fined 105 Turkish Liras each, penalties that they appealed on the grounds that they were conducting union activity.

An Istanbul court rejected the teachers' appeal on the grounds that they had been "attempting to hand out statements without any person's request and causing disturbance with slogans."

The 11 teachers petitioned the Constitutional Court for rights violations, namely their freedom of expression and organization, their right to a fair trial and their right to a justified ruling.

The top court noted that the teachers' prosecution had been based on the criminal article of "causing disturbance to sell goods or services," ruling that the act could not be defined as such.

"The article was interpreted radically different from its purpose and was made into another criminal act," the top court said, sending a copy of its decision to the local court for a retrial. 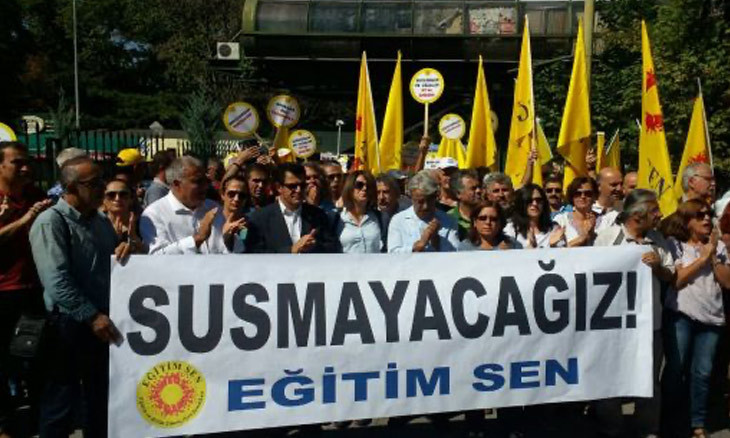