Several young people in Turkey have taken to social media in recent days after their debts to the state-run Credit and Dormitories Agency (KYK) increased to exorbitant levels in the face of spiraling inflation.

The youth started to share images showing the amount of education loans they actually received versus the amount they are now asked to pay.

Alumni are now requesting that the KYK partially and completely annul their loans, as they say that they cannot pay such excessive amounts while receiving low wages on the verge of survival.

Ayşenur, who this year graduated from Erzincan University Political Science Department, told BBC Turkish that although she had been granted a loan of 26,000 liras during her university years, she was now required to pay back a debt of 74,000 liras.

Mert Batur, who is looking for a job after graduating from Istanbul University Law Faculty last year, said that the repayment amount of his KYK loan had been doubled this year due to a rise in the interest rate imposed on it. He also said that he has friends who were facing an outstanding debt of up to 180,000 liras.

Several opposition politicians have slammed the exorbitant raise on the alumni's debt balance, with even main opposition Republican People's Party (CHP) leader Kemal Kılıçdaroğlu calling on the youth not to pay their debts.

Kılıçdaroğlu on July 10 shared a newly graduate's tweet about the increase in her outstanding loan, and said: “I call on the youth: Do not pay back your KYK debts on interest. We are coming to the rulership in one year; as I have promised, only the principal money will be demanded from you, and that is when you find a job.”

Youth and Sports Minister Mehmet Kasapoğlu said on July 13 that the issue of KYK loans will be discussed at the next Cabinet meeting and the government's decision would be shared with the public by President Recep Tayyip Erdoğan.

Meanwhile, Turkey's unemployment rate remains in double digits and is particularly high for young people and university graduates, who face an uncertain future amid a deep recession. 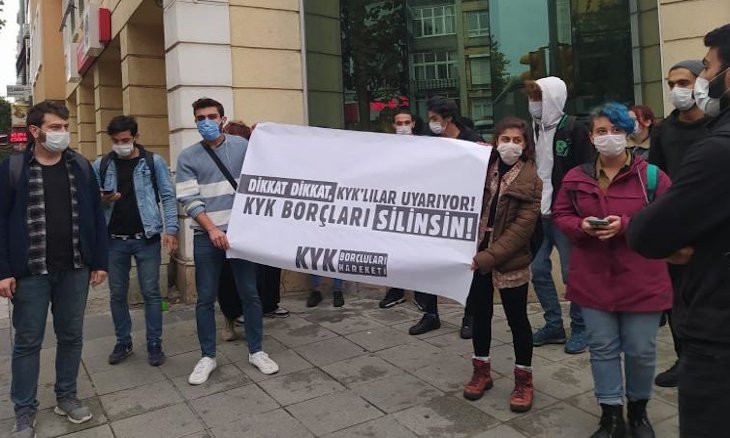