The elections on September 26 were won by the SPD (25.7%), just ahead of the CDU (24.1%). The Greens, who were considered possible winners just months ago, came in at only 14.8%, followed by the FDP (11.5) and the AfD (10.3%). The Linke (Left Party) failed to overcome the 5% threshold with 4.9%, but was able to win 3 direct mandates and thus still enter parliament, which will be more diverse than ever before. Among the 735 deputies, over 11% are migrants, 18/19 of them with a background in Turkey. The hope now is, whether one of these migrants will become a minister.

Two weeks ago I wrote that “some 20 MPs with a background in Turkey will be MPs after the elections.” The actual number now is 18 or 19, depending on the definition, the highest absolute number and percentage ever. In general, the Bundestag has been becoming more diverse in the past two legislatures. The percentage of MPs with a migration background was in 2013 only 5.9 percent, rose in 2017 to 8.2 percent and now stands at 11.3 percent, an analysis by the Mediendienst Integration showed. 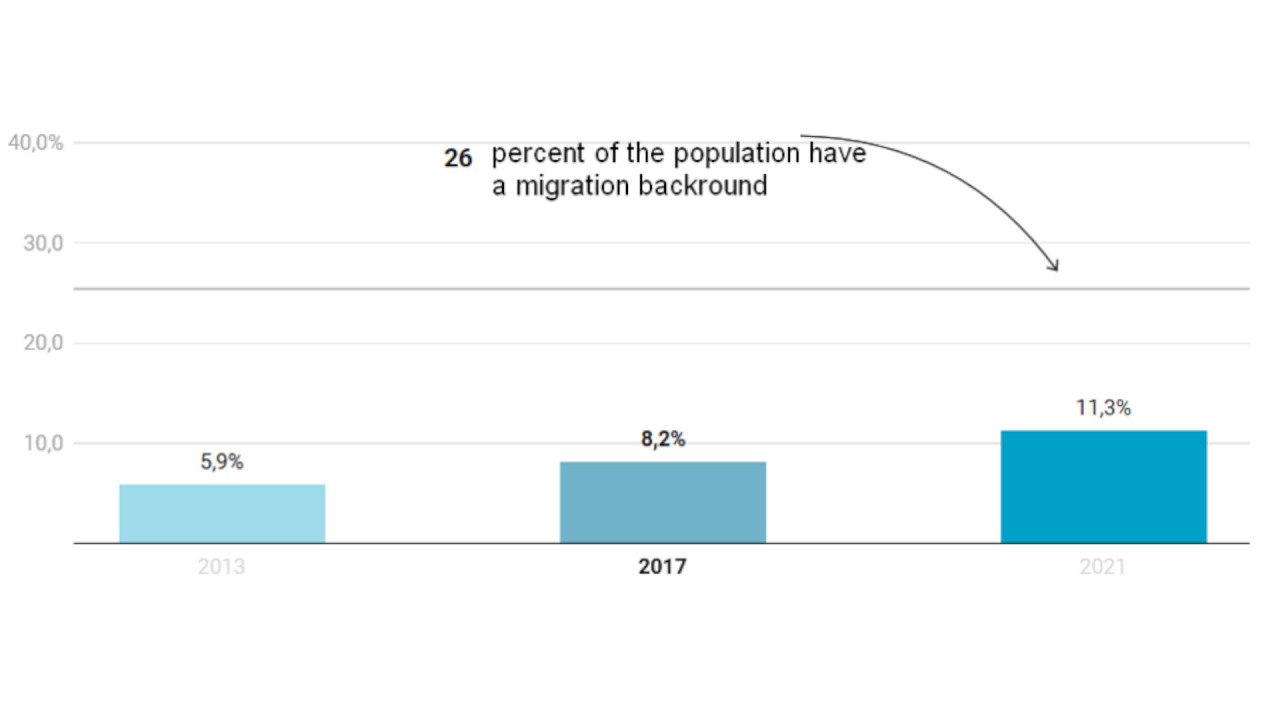 The number of German-Turkish/Kurdish MPs rose from 14 to 18/19. One MP is an ethnic Greek with some family roots in Istanbul, so he could be counted as having a background in Turkey as well as Greece. German-Turks/Kurds make up roughly 2.5 percent of the German parliament. For a country, which for a long time denied its migration reality, this is a fair number. German-Turks/Kurds with a German passport number ca. 1.5 million of a total population of 83 million and therefore are 1.8 percent of the electorate. However, together with those holding a Turkish passport, the population is 2.8 million, which is 3.3 percent of the population, so the parliamentary presence ranges between the German passport holders and the overall Turkish-Kurdish community.

The political party with most MPs in the parliament (206), the SPD, also has the highest number of German-Turkish MPs with 10, followed by the Greens with 5, the Linke with 3, and 1 from the CDU. None of the candidates from the FDP reached parliament via their state lists.
The candidates are, divided by Land (state):

There are MPs with a background in Turkey from six Länder (states), of which there are 16 in total. This means that there is a concentration of a few states, which send Turkish/Kurdish MPs to Berlin. Not so surprising is that none of these MPs ran in East German states, where the migrant population is very low, but that states like Hessen with the city of Frankfurt or Rhineland Pfalz with the city of Mainz do not send a single German-Turk/Kurd to the Bundestag is rather surprising.

18/19 is the highest number ever, but there were many more candidates. Of the 6 parties in parliament there were 64 in total: 26 from the Linke, 19 from the SPD, 11 from the Greens, 4 from the FDP, 3 from the CDU, and even one from the AfD. Smaller parties not present in parliament had another 51 Turkish/Kurdish candidates, so a total of 115 German-Turks/Kurds were candidates in the elections.

Whereas in the previous legislatures all 14 German-Turkish/Kurdish MPs came from the three center-left parties, this discrepancy was not really resolved in the current parliament. Only 1 out of the 18/19 is from a center-right party, in this case the CDU. Serap Güler comes from the social-liberal wing of the CDU and is close ally of Armin Laschet. She was state secretary for integration in the ministry of children, family, refugees, and integration in North-Rhine Westphalia. Since 2012 she has been a member of the federal executive board of the CDU and was elected one of the deputy chairpersons of the CDU in 2014. She was the CDU's direct candidate in the Leverkusen - Cologne IV for the 2021 Bundestag election, but lost out to Karl Lauterbach (SPD) and entered the Bundestag via the state list. As one of the few prominent migrants within the CDU, Güler belongs already to the liberal establishment of the party, which was the dominant current under Merkel. If the CDU ends up in the opposition, this intra-party balance might swing towards the more conservative wing and could cause a loss of the liberal current.

Some German-Turkish/Kurdish candidates won their direct mandates with a very high vote. Cem Özdemir received the highest vote of all Green candidates with almost 40 percent in his constituency (Stuttgart) in Baden-Württemberg. With this, he also got the highest vote of all candidates in Baden-Württemberg. The second highest vote among Green candidates went to Canan Bayram, who got almost 38 percent in Berlin’s Kreuzberg-Friedrichshain district, which has been now for many years a stronghold of the Greens. Also, a German-Turkish SPD candidate, Hakan Demir, was directly elected with 26 percent in Berlin’s Neukölln district. These are signs of normalization, that in central big-city districts the majority of ethnic Germans don’t have a problem voting for ethnic non-Germans.

The Bundestag is more diverse now, but this is no guarantee that the next government will reflect this diversity. Among the protagonists in the coalition negotiations on the sides of the SPD, Greens and FDP, but also the CDU, there are no prominent migrants. However, there is still hope that one MP with a migrant background will become a minister for the first time. It would send one more message to both the migrant communities and the population at large that migrants are increasingly part of political decision making and not just decorative accessories.