Pantre rhei. Everything is flowing. Time, that is the uncontrollable dissolves life in itself without ever losing its endless power. Our memory, the ones that don't melt. What remains on the sieve of time determines who we are as much as what we will become. Gezi is one of them. It made history at the moment it was experienced and turned into one of the elements of our founding memory.

The internet; in other words, the new Silk Road connecting the whole world once again with its capillaries, is the birth of the new human as a cosmonetizen. Politics, as well as economy, can update itself only to the extent that it takes this “fact” into consideration; can reproduce itself institutionally only to the extent that it can consider networks as an input to policy.

The Gezi Resistance, which started with an attempt to stop the transformation of Gezi Park that was Topçu Barracks (Previously the Armenian Cemetery) during the last period of the Ottoman Empire and opens to Taksim Square which can be called the heart of Istanbul with the daily human traffic, into a shopping mall, is 8 years old. Taksim Square and Gezi Park are Turkey’s important spaces of memory that have preserved their politicization since the late Ottoman era. The Erdoğan Regime, which can also be called Populist Authoritarian Theocracy / Populist Theocratic Autocracy, has been trying to rewrite history through some kitch and inject its own identity into the whole society by trying social engineering, for years. In this climate, Gezi also became, and continues to be, a channel through which objections unite and flow. 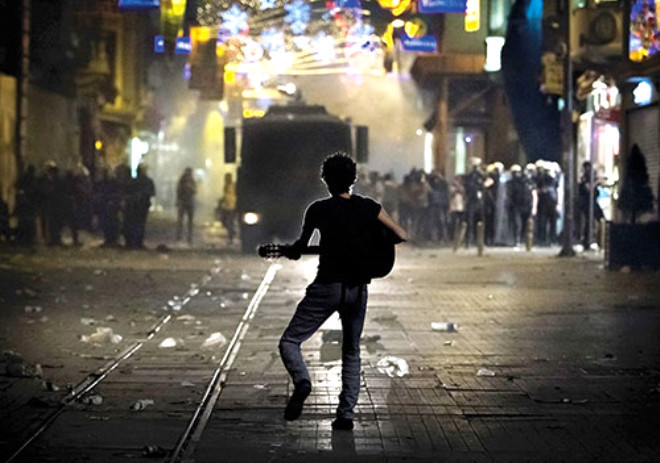 According to the Ministry of Interior’s statement dated 23 June 2013, some 2.5 million people supported the Gezi Resistance by physically participating in the demonstrations in 79 provinces, except Bayburt and Bingöl. This is a unique example in the history of Turkey, both in terms of prevalence and massiveness. The transformation of social media into the new public sphere by undertaking the function of the mainstream media that is under the control of the government, the indifference and/or incompetence of the traditional media in keeping the pulse of events deepened and increased virtual interaction. Millions of people followed the process in hybrid forms, supporting the resistance at different moments.

While the Erdoğan Regime, trying to rule with the arbitrary dispositions of the Freak Party State, implements neoliberal economic-political policies in the most vulgar way, its discourse is not at the present time. The gap between them makes perception and categorization difficult. It hides what it is, by burying it in the mists. Citizens demand to take part in decision-making processes in both local and national representations. But the government refers to the 19th and 20th centuries. Gezi is the reference of the evolution of Turkey’s people from “subjects” to “citizens”, more precisely, to network including the citizens, and their perpetual intervention in the city they live in. 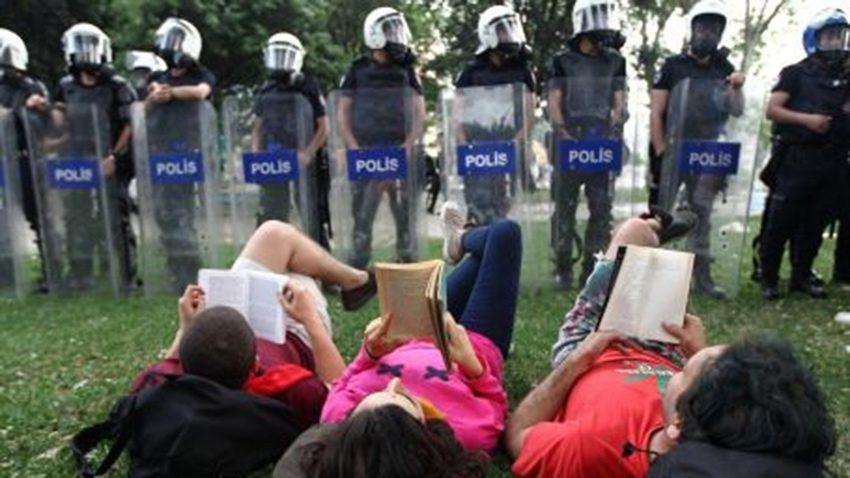 The Gezi Resistance, which started at the end of May 2013 and became a part of both Turkey’s and also the world’s agenda for about a month, until the end of June 2013, is 8 years old. Gezi is the projection of the wave with the subject as cosmonetizen, in Turkey. Both the neocons and the populist new right wave can build walls as much as they want, build the nation-state policies on nationalism, xenophobia, and hostility against immigrants-refugees, the genie is out of the bottle. Not only did he get out, he started to produce his own concepts and institutions. “Cosmonetizen” is the spirit of DiEM25 and Progressive International; two of the institutions of this new socio-political ecosystem. Cosmonetizens with internetizers have already created the opportunity for a new world. The United Nations will soon be replaced by the United Cities… We are rapidly moving towards the age of cities. The shackles on our feet are nation-states and dysfunctional international institutions they have come together to form.

Nationwide demonstrations, protests, various occupations in Tunisia which have started off after Mohammad Bouazizi's self-immolation indicate a new paradigm in culture and politics. Less than a year later, this wave confirmed those who "wanted the hurricane created in America by the butterfly flapping its wings in Africa". On Sept. 17, 2011, the Occupy Wall Street protests began in New York and were born in a different form throughout the United States with “We are the 99%”. The demands were common: to be the subject of their own life. 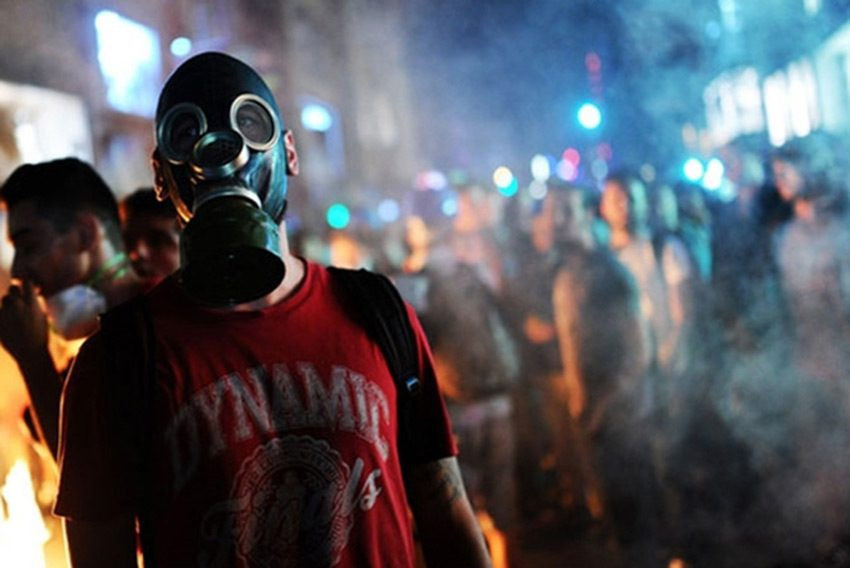 Gezi is a component of this wave. It is one of the unique instances where the new demands rising throughout the world are expressed. There is now no problem in the world that can be addressed or comprehended independent of the global political economy. Nation-states are dwarfs for global problems and giants for local problems, i.e. they are dysfunctional. This clumsy structure that no longer is alive at present, tends to impose itself despite the will of life. For this reason, problems of legitimacy are deepening in many other countries, including Turkey.

The insistence on keeping alive the practices of the world’s establishment and/or the global establishment, resembling a school performance, is ridiculous. Because the genie is already out of the bottle. Gezi, like many other examples, is one of those genies that have come out of the bottle. Gezi is a stage on which what is already like that, and what has been like that for a long time, was made substantial by everyone. It is Erdoğan and the Freak Party State, who bury their heads in the sand like an ostrich, not to see this stage.

Before Gezi, the Freak Party State has banned social media and blocked access to Twitter and Youtube. Even children aged 12-13 could play with DNS settings and access the sites. Maybe their parents or grandparents took the state seriously, but not them. They/did not regard as an authority the state on the street, the teachers at school, and their parents at home. Gezi was a break where this spirit was manifested and was concretely socialized. Plus, it was appealing. In a politico-social universe where the political has been declared malicious by the established order, the networks have created a new socio-political ecosystem. This new habitat brought along new subjectivations, relationships, norms, experiences, and the comprehension that “it can be different”. Most importantly, it offered hope. It nurtured and strengthened.

As much as one side of the coin indicates what is current, the other side is old. In Anatolia and Rumelia which are also Roman geography, you can frequently run across holy springs, saints, holy sites, relics and shrines. When a person or event becomes public, he/she/it immediately becomes metaphysical. Metaphysication is a kind of ideological "solution" as well as understanding and comprehension. It is ideological because it takes the object that is metaphysicated out of context. It freezes it into the holy halo. Social movements enable their socio-political “values” to be / become metaphysicated by making cults of them. They want to take advantage of the power this creates. Their short-sighted pragmatic attitudes degenerate the value at hand. It is extinguishing. The status quo reproduces the decontextualized with manipulative representations. The status quo is just that. Metaphysication is therefore ideological.

The metaphysication and demonization of Gezi are carried out simultaneously by the opposition and the government, by the same theological method. This unique experience, which opens the door to cosmopolitas / cosmonetizer for the society of Turkey, is taken out of its context due to the theological approaches of two sectors opposing each other, who try to cut it off from its historicity and actuality by making it a subject of discussion over its representations; however, Gezi does not fit into any ideological baggage. The hand of the concepts of the past cannot encompass, grasp, embrace Gezi or cosmonetizen because neither its quality nor quantity is suitable for this new entity. Gezi is the one that is beyond the comprehension of the concepts of those who remain in the past. Because it is what is currently happening. 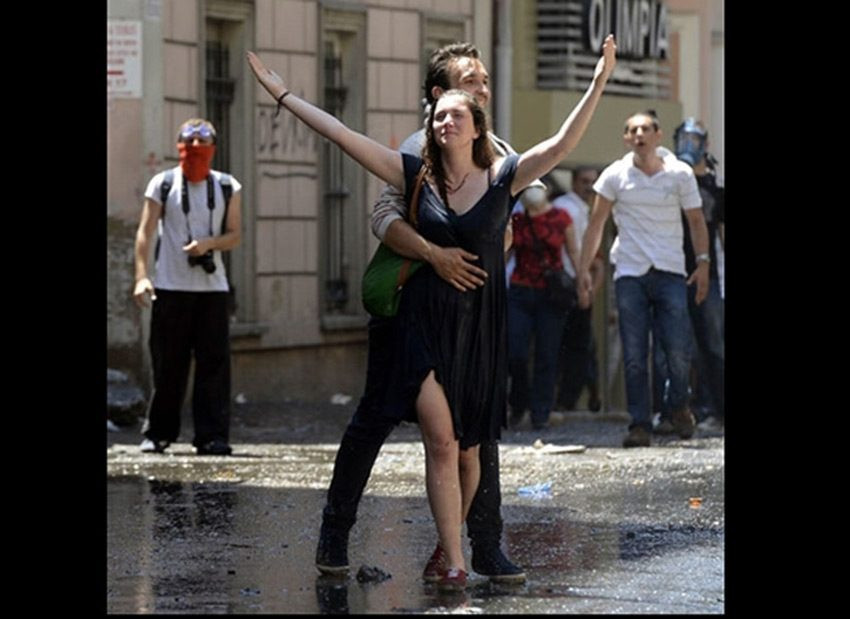 In his novel named Samarkand, Amin Malouf makes Omar Khayyam say the following words about time: “Time has two dimensions; one is its length, which is determined by the course of the sun, and is the same for all; the latter is its depth which is determined by the passions.” Resistance became the passion. This passion impelled the people of Turkey to both subjectivation and to make room for others in their lives. There were so many metaphors breaking the mould. Revolutionaries keeping guard while anti-capitalist Muslims perform Friday prayers at Gezi; During Ramadan, which coincided with the Gezi process, setting of tables of earth for miles where all fasting or non-fasting people sit together and break their fast with whatever they have... A Turkish nationalist and a Kurdish youth drawing strength from each other by holding hands and escaping police violence ... Many images, metaphors have already taken their place in the collective memory, took place in the socio-political identity. None of these were as effective as "The Woman in Red". “Woman in red” as a metaphor, is the shaping in flesh and bones of the subject whose soul was revealed in Gezi.

Turkish society's own archaic masculine, macho, Islamist, nationalist understanding of the Freak Party State, which dates back to the 19th century and has already turned into a straitjacket, is no longer political. It's not even laughable. The tension continues. Dialectics works. The water is flowing. Panta rhei. 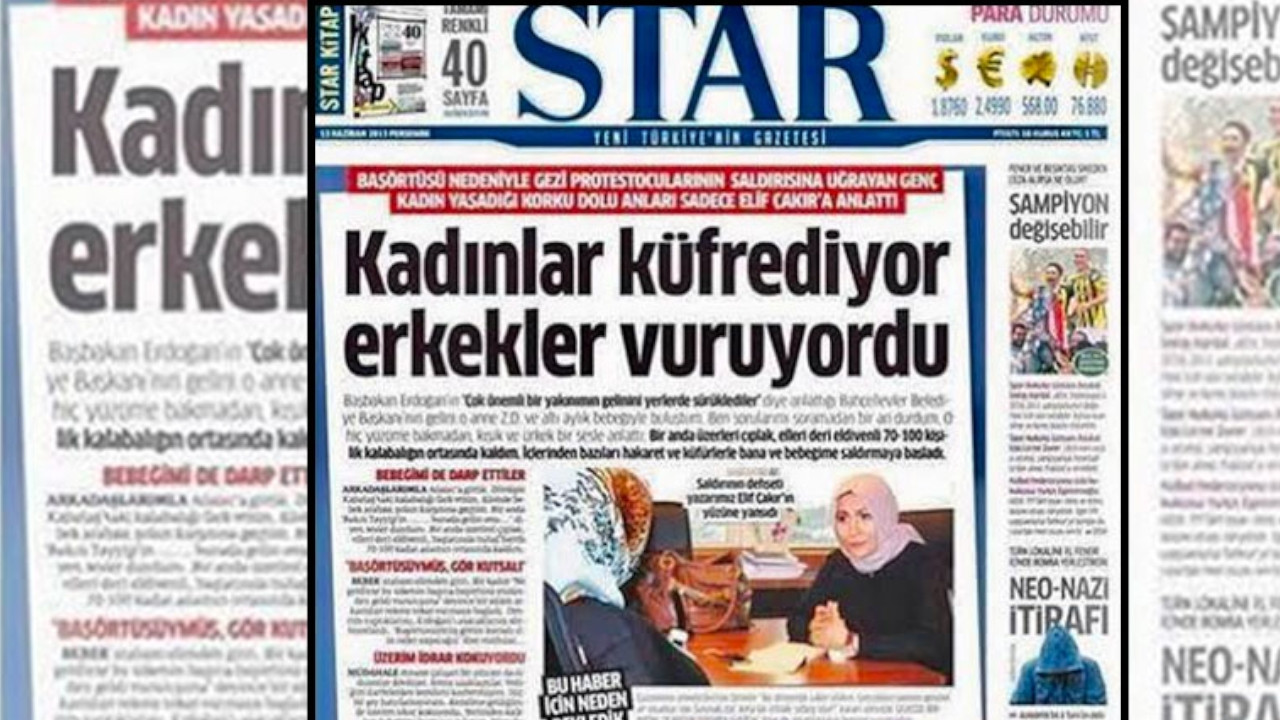 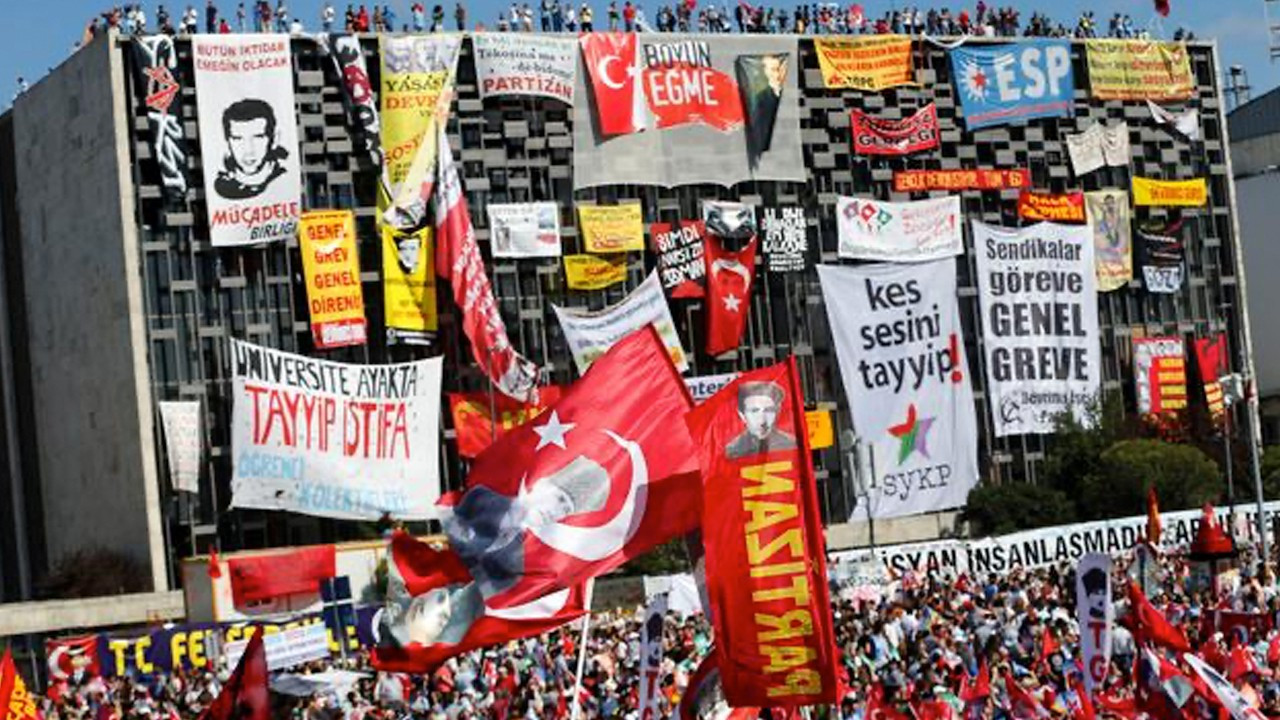 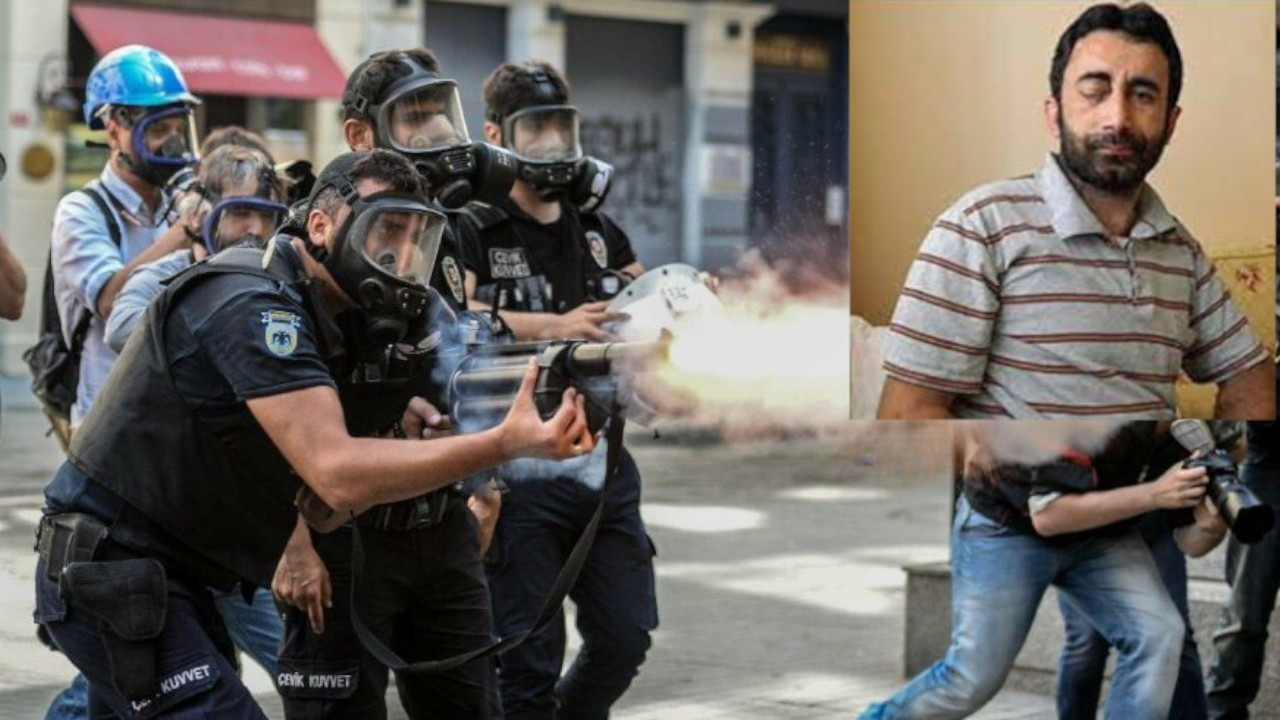