Human Rights Watch has called on Turkey to reverse the convictions of four human rights defenders, saying that the sentences given to them are politically motivated.

An Istanbul court on July 3 sentenced four rights defenders to prison during a hearing at the Çağlayan Courthouse of the Büyükada case.

Günal Kuşun, İdil Eser and Özlem Dalkıran were handed one year and 13 months jail terms each over "aiding a terrorist organization." 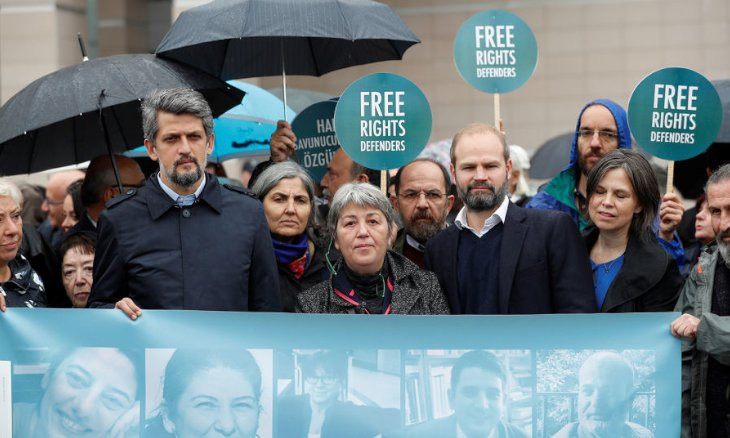 "The conviction of four human rights defenders without evidence of any criminal wrongdoing, is politically motivated and an effort to stifle the legitimate work of Turkey’s human rights movement," the HRW said on July 6.

“In three years the police and prosecutors have produced not a shred of evidence of criminal activity by any of the 11 rights defenders who stood trial,” said Hugh Williamson, Europe and Central Asia director at Human Rights Watch.

“Four have been convicted for their legitimate human rights work in another trial which demonstrates how any independence in Turkey’s justice system has collapsed under political pressure.”

Human Rights Watch said that the ruling of July 3 cited no grounds for the convictions, adding that it is awaiting the court’s full reasoned decision.

“The court’s verdict convicts four people but is an attack on the entire human rights movement in Turkey,” Williamson said.

“We hope the higher courts will do their duty and reverse this miscarriage of justice.”