A new political debate has been continuing on where the Kurdish issue focused Peoples’ Democratic Party (HDP) seems to be at the center.

On Monday, HDP issued a key document which made it unequivocally clear that their political priority is the return to a parliamentary system. The HDP listed 11 items to summarize their approach to the 2023 general elections, with the primary article being "a strong democracy" based on representation, debate and democratic consensus.

On the government front, certain moves were initiated while President Erdoğan visited the southeastern city of Diyarbakır via Head of the Directorate of Religious Affairs Ali Erbaş’s contacts in the region. There was also the leaking of certain polls. Rumors have been spreading that imprisoned PKK leader Abdullah Öcalan could be re-evaluated. Contrary to popular belief, extreme right Nationalist Movement Party (MHP) leader Devlet Bahçeli did not resist such initiatives - as was the case in the Öcalan letter incident.

The approach of the ruling partners seems to be a formula of excluding and isolating the HDP so that they can work to gain the Kurdish votes. The main opposition Republican People’s Party (CHP) has been exerting efforts, for some time, to broaden the scope of legitimacy in politics. Now the party seems to have adopted a more active and militant policies regarding several issues.

The discussion began with CHP leader Kemal Kılıçdaroğlu’s statements, then went on to include HDP officials. Kılıçdaroğlu said the address for solutions of important issues was Parliament. He said his call was directed toward all political parties.

Kılıçdaroğlu initiated the debate not in a media interview but in a documentary shoot (Mr. Kemal and His Alliances), saying that the real addressee of the solution to the Kurdish issue could be the HDP: “There is a Kurdish problem that the political structure has not been able solve for 35 to 40 years. Erdoğan had the state contact with an illegal actor in the İmralı Island.” This was an important response to the government’s basic strategy against the opposition. It is important that the CHP has started talking about the Kurdish question, which it had previously shied away from. It is significant that the CHP has said that contact with the HDP could be an opportunity, not a risk - as the government always uses this rhetoric to cause trouble for the opposition.

The government has been dividing political actors, political parties, and voters into legitimate and non-legitimate categories, as well as reliable and non-reliable. The CHP’s response was a broader description of political legitimacy. Müsavat Dervişoglu, deputy group chairman of the İYİ Party (Good Party), mentioned the legitimacy of the HDP by pointing to its role in the Parliament. This was a sign that Kılıçdaroğlu’s statement comforted the Nation Alliance. The lack of reaction to those government circles who tried to attack Kılıçdaroğlu’s words also justified this perspective. The course of events caused Bahçeli to make a statement (in total denial of the Kurdish issue) declaring that those who accept the HDP as a legitimate body were themselves illegitimate.

The debate also gained footing via statements from HDP circles. Sezai Temelli, the former co-chair of the HDP, said in a social media post, quoting Kılıçdaroğlu’s words, that the HDP cannot be the only interlocutor, and that İmralı was the key interlocutor. He then stated that these were his personal views, not the official view of the party, and that his post was not intended to directly respond to Kılıçdaroğlu. Several people in the opposition circles participated in the debate with the take that “the assisting pass provided by the CHP was missed.” They thought that such an approach would reduce the HDP’s options and those of other opposition actors and that this approach rejected the HDP’s base existence.

Initiating a debate regarding who to negotiate with on the Kurdish issue by outlining an exact interlocutor would not facilitate the work of parties. It would likely instead lead to uncomfortable silence. First, however, HDP circles expressed some discomfort. Then Selahattin Demirtaş, former co-chair of the HDP, and later HDP Co-Chair Mithat Sancar, said, “Of course the HDP is the interlocutor and the platform is the parliament.” With faster-than-expected responses, it seems that the issue remains in the opposition’s court for the moment. There is a difference between Bahçeli's familiar response and the “innovation” Kılıçdaroğlu opened via the debate.

The CHP has previously said, “The parliament is the address of the solution.” There is nothing new in what Kılıçdaroğlu said in this regard. However, the HDP’s inclusion in the equation is important as it disrupts the current political balance and the government’s game plan. It opens doors to new approaches for the government, the opposition alliance, and the HDP. It opens a debate. This is a new interpretation, the signs of which we saw during the CHP delegation’s visit to Iraqi Kurdistan, one founded in political research.

For instance, the data of the Socio-Political Field Research Center research carried out in Diyarbakır, Mardin, Urfa, Van, Batman, Siirt, Şırnak, Hakkari, Ağrı, Muş, Bingöl, Bitlis, Adıyaman, Kars, Dersim, and Iğdır are remarkable. Despite oppression, the HDP has not been losing votes in the region, while the CHP has also increased its votes significantly. Since 2018, the HDP has increased its votes from 50 percent to 55 percent, while the ruling Justice and Development Party (AKP) has fallen from 24 percent to 14 percent. The CHP vote, which is 6 percent, appears to have increased to 13 percent. This situation indicates a change in political trends that calls for a serious political evaluation. We have seen signs of a similar change in big cities during the local elections.

This debate concerning who should be the interlocutors in a solution to the Kurdish issue has prompted different actors to be involved in quite different ways in a short span of time. It can produce opportunities if saved from short-term interpretations. Of course, the Kurdish issue dimension of the problem is important. If you look through this lens, different interlocutors can be suggested for various layers of the problem because the issue is old and multi-faceted. Its context, timing, and the speculations it provokes may be considered problematic. Just as problematic as the interlocutors were during the “peace process,” the situation today is just as problematic. However, what drives the debate is not actually related to the Kurdish issue, but how this issue will impact the political arena.

As Dervişoğlu from the İYİ Party told journalist Muharrem Sarıkaya, the argument by Sezai Temelli may even have strengthened Kılıçdaroğlu’s stance. At the very least, it has given a strong cause for Demirtaş and Sancar to take a clear stance. It may seem like a small detail now, but Temelli’s statement could stop the government’s tendency to “reconsider Öcalan,” rather than weaken the CHP’s call. Because accepting Öcalan as an interlocutor and not the HDP, as was done previously and as Kılıçdaroğlu has highlighted, is a method resorted to by the government. These methods were used by the government, with the approval of the MHP, during the peace process and during election operations. 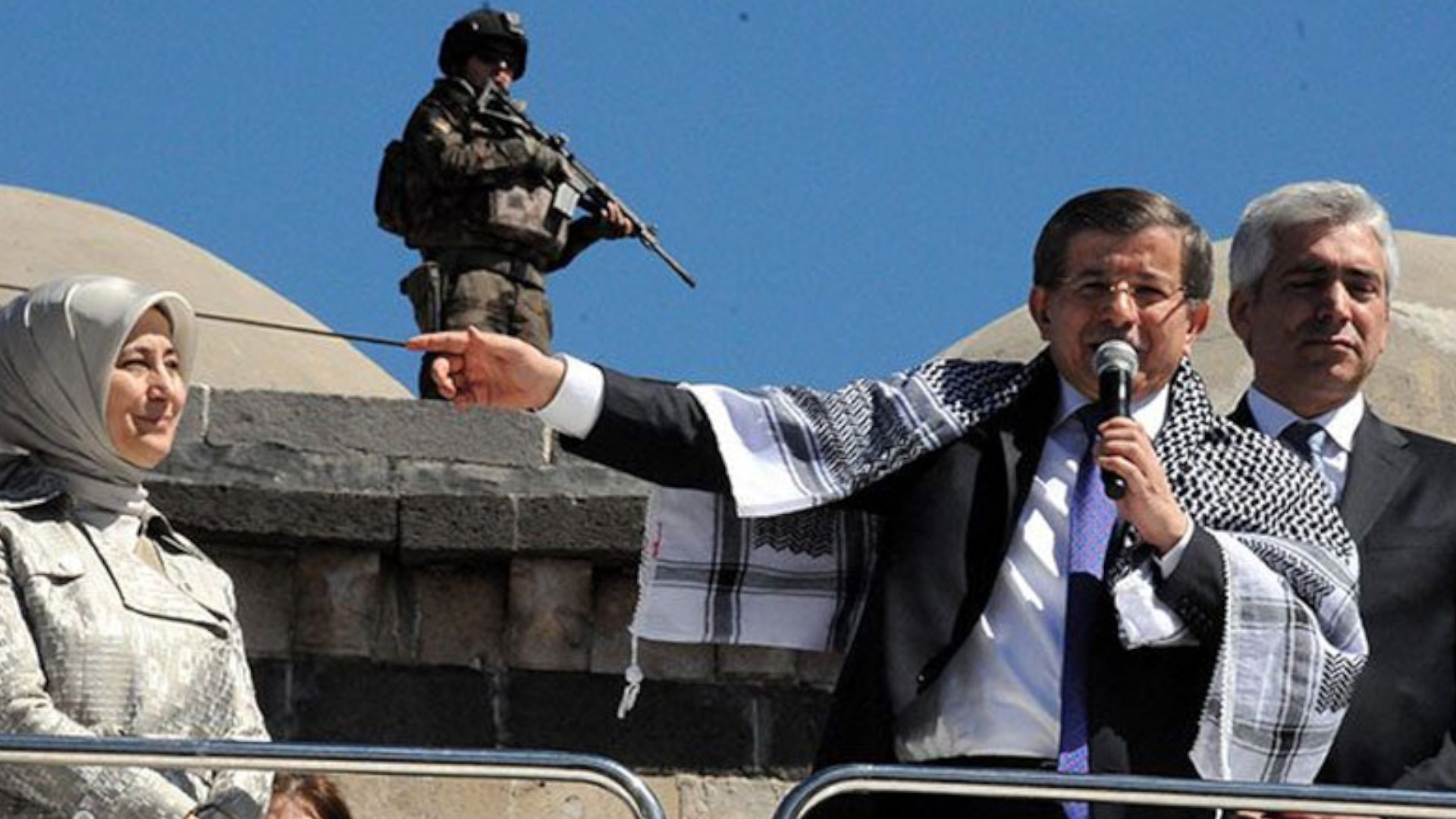 Davutoğlu must reveal the secrets of 2015World
Other Articles
September 14, 2021 Election threshold engineering
August 28, 2021 Holes in the wall of identity politics
June 04, 2021 How can the opposition take advantage of ‘anti-Erdoğan’ moment?
May 14, 2021 A symbol of Turkey's every wrong
April 30, 2021 Erdoğan losing control of his own system
Most Populars
Shelter employee beating dog to death causes public outrage in Turkey Turkish political leaders depicted as Disney characters 'Fake doctor' who worked in state hospital for 1 year arrested Cigarette packages collected by Erdoğan exhibited at the Presidency Erdoğan links soaring inflation to 2016 coup attempt Turkish main opposition leader visits MIT in US